Tahiti. The word itself evokes images of turquoise waters, swaying palm trees and dramatic vistas that are so camera-friendly, they‘re always ready for their close-ups. You can almost hear the Rodgers and Hammerstein song, Bali Hai, playing in the background as you bury your toes in white sand.

Arriving at the Tahiti Yacht Charters (TYC) base in Apooiti Marina on the island of Raiatea, my mind was not on white sand or Bali Hai, but rather on the myriad details of running a Nauticat 441 catamaran, one in our flotilla of eight boats. Most of our nearly 50 guests were wandering about, awed by the thought of being in Tahiti. This was their fantasy and probably the headliner on their bucket list. Looking at their faces when I mentioned this was my fifth trip, I suddenly realized how Tahiti can never be taken for granted and how lucky I was to be visiting paradise once more.

“Ia ora na,”came the sing song hello from TYC base manager, Sofie, calling us to gather for the Tahitian send-off dance. “Maeva (welcome) to paradise,” she added. Sunsail shares Apooiti Marina with TYC while The Moorings and Dream Yachts are in another marina around the corner. Most of the charter boats available today are catamarans which make better living platforms for large groups and their shallow draft comes in handy in the skinny water near the motus (islands on the fringing reefs). It’s amazing how confident two extra feet of water below your keel will make you.

I sent a few of the crew to the nearby town of Uturoa by taxi to provision. It’s interesting to see what returns when five people go to buy food—unquestionably, too much. Everything is expensive in Tahiti because most of it is shipped in so shopping for local foods or French brands stretches your francs (CFP). Mangos, pineapples, bananas, papaya, coconuts and pamplemousse (grapefruit) are excellent. French wines and cheeses are terrific as is the mahi mahi mousse, a kind of fish pate. When combined with a French baguette and a chilled white wine, it makes a very happy sundowner in the cockpit.

By the time the checkout is done, the first afternoon on charter is usually short so we anchored at nearby Tahaa (the vanilla island), which shares a fringing reef with Raiatea. It’s good to have an easy anchorage in protected waters for the first night. Just two hours north from the charter base is Hurepiti Bay where Alain and Christina Plantier run a fun land tour on a 4×4 truck that includes a stop to feed coconuts to chickens, learn about vanilla pollination and sample noni juice, a fruit that is rumored to be a miracle cure and a fountain of youth but is so foul-tasting that it is reminiscent of boiled sweat socks. Drink up.

Tahaa is also home to a few of Tahiti’s black pearls farms, so we couldn’t get away without a tour to learn how the pearls are cultured and, of course, buy some beautiful samples. A few francs lighter, we headed out the well-marked Toahotu Pass to the open ocean to make the crossing to Huahine, one of the lesser-developed of the Society Islands. After a five-hour bash to windward, we entered the reef via Avamoa Pass and anchored near the town of Fare. Cruising boats stay mostly on the western side of Huahine where the reef provides a passable channel and plenty of anchorages all the way to the southern tip, but a great way to see the rest of the island is to rent a bike in Fare and ride over to the northern end to visit the stone fish traps in Lac Maeva, the many maraes (religious sites) and the sacred eels in the fresh water river. These eels are five feet long, have blue eyes, and will embarrass themselves for a taste of canned tuna.

Two days later, the return trip to Raiatea was decidedly more pleasant. We sailed wing-on-wing back to the southeastern side of the island and all the way through Irihu Pass. It is not possible to make it from Huahine to Bora Bora during daylight so we anchored near Paipai Pass on the western side of Tahaa to get an early start on another beautiful downwind run.

Bora Bora is the most photographed and famous of the islands. But it is a deceivingly long sail to get there from Tahaa because you can see it all day but you must sail all the way around the large fringing reef before finding the one passable entrance, Teavannui Pass, on the western side. The marker on the reef’s southwestern edge is a rugged and eerie reminder to pay attention to your charts. Once inside, we tied up at the town dock in Vaitape to pick up ice and provisions at Chin’s market before heading down to grab a mooring at Bloody Mary’s, a landmark palapa-style restaurant with great food, a friendly staff that will let you get water at their dock, mauruuru (thank you), and sand floors where you don’t even have to wear shoes to dinner.

It’s easy to become obsessed with Otemanu, Bora Bora’s main mountain that rises 2,300 feet above the crystal lagoon. It is the perfect backdrop for a tropical paradise. From Bloody Mary’s we wanted to head to the remote southeastern corner of the lagoon where the snorkeling is terrific. The 90-minute trip around the island and inside the reef is marker-to-marker navigation through shallow water so we got well-acquainted with our charts. In French Polynesia, it is not “Red, Right, Returning’, so we kept the green markers to the reef and the red toward the island regardless of the direction we were going.

Not many cruisers or charterers know about the coral reefs where you can go drift snorkel at the southeastern tip of Bora Bora’s fringing motus. I pulled up the dinghy on an isolated stretch of broken coral bits and walked to windward so we could drift back with the strong current. Lots of fish swim in and out of that coral garden but the star attraction is the sea clams with their multi-colored iridescent mantles that burrow and live among the coral heads.

Tahiti is not a party place so for nighttime entertainment, we found it best to call a water taxi to take us to one of the local hotels like the St. James or Hilton. Dinner reservations are required and bring your wallet because you’ll be paying $25 for colorful cocktails. Well, I said nothing in Tahiti was cheap.

Alas, it was time to close the loop on our 10-day charter. We got lucky as the trade wind was down so we had a benign motorsail on a close reach back to the southwestern tip of Raiatea. We entered via Punaeroa Pass and anchored behind Naonao Island, the last perfect motu vista of the trip. Because we were up early the next morning, we grabbed a mooring in deep Faaroa Bay around the corner to kayak up a tropical river surrounded by taro fields and exotic flowers.

The charter may have been finished but the adventure wasn’t, so the next day we took the 45-minute flight back to Tahiti for more sightseeing. A few of the best tourist attractions can all be visited in one day. We grabbed breakfast at the municipal market in downtown Papeete where hundreds of vendors gather to sell everything from from produce and textiles to flowers and carved wood souvenirs. There’s even the Tahitian version of a food court with numerous stalls bursting with pastries, baguette sandwiches, prepared curries and poisson cru (marinated fish much like ceviche).

During the day, we rented a car to circle Tahiti Nui (big island) and Tahiti Iti (little island) stopping at the Gauguin museum and Venus Point where Captain Cook sighted the planet in transit. By 6:00 p.m., we were back in Papeete at the rebuilt Gare Maritime (ferry dock) on Boulevard Pomare where les roulottes (food trucks) pull in every night for an evening of culinary delights. Each truck has specialties from Chinese to fish to crepes and pizzas. No alcohol is served but it’s the cheapest eats you’ll find in Tahiti and we still made it to our international flight at midnight from Faa’a airport just 10 minutes away.

Most of the Society Islands are around 16 degrees south latitude so the days are short, the temps are steady between 75 and 90 degrees Fahrenheit, and the tide is about a foot, which can make a difference if you’ve got one keel perched on a coral head. The Tahitian people are very friendly, the scenery is incomparable, and even if you chafe at the thought of $25 cocktails, you can’t beat the view. 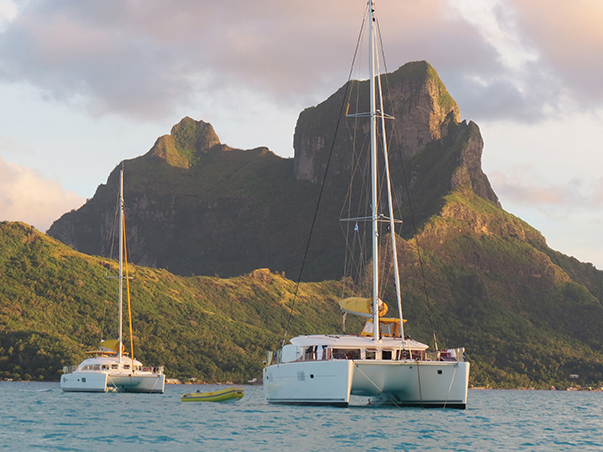 There’s no need to speak French or Tahitian as it’s possible to get by in English, but it does put a smile on a local’s face if you try out even a little Polynesian, so why not exercise all those vowels and give a few Tahitian words a test drive? My fifth trip in paradise was as magical as the first and I had to remind myself that if I’m lucky enough to be sipping a cold local Hinano beer anywhere in the Society Islands, well, I’m lucky enough.