While departing Cape Town, South Africa during past summer trips, I often experienced the same conditions—the sun would beat down while moderate breezes pushed us northward toward our destination in the Caribbean. After quite a few trips along that route, delivering or racing boats of one kind or another, it could almost be expected that the trips would be downwind, often with a steady breeze and relatively peaceful. But as with all “rules,” there are exceptions. And those exceptions often test our resolve.

Tests can come in many forms, and the first for that trip up the South Atlantic would be a test of the weather. Leaving in mid-December meant that we would be crossing the South Atlantic at the height of the Southern Hemisphere summer. The South Atlantic High was displaced to the south, away from the tropics, and the normal southeasterly trade winds would be light during the summer season. In order to salvage a Northern Hemisphere winter in the Caribbean, we would need to move right along. Those two concepts—light winds and moving right along—required early and frequent use of our engines. Within a week, the calm seas and flat gray clouds witnessed a rapid depletion of our fuel supplies. We would need to stop in St. Helena to refuel.

Our approach from the southeast slowly unveiled an oversized barren rock of a place. It looked desolate and deserted. We had heard that a few small fishing boats operate out of St. Helena, and there’s a small settlement on the northwestern side of the island. Charts revealed few details. Guidebooks told of a place so secluded that the British ultimately decided to consign Napoleon to its apparently inhospitable craggy brown hills. We found a charming warmth that only remote places seem to offer.

Our crew consisted of Steve, the captain; Louise, his first mate; Rowland, an experienced hand with big catamarans; Ross, a young South African on holiday from the University; and me. It was an eclectic mix of backgrounds and talents and a group that always managed to find fun and adventure in every situation. And those who lacked age did not necessarily lack experience. Louise had spent a year on a research vessel and Ross, the youngest in our group, was also the youngest person in South Africa to qualify as a certified wine taster. Considering his willingness to swap starter motors between engines and his ability to fillet a fresh yellowfin tuna into fabulous sushi, even the youngest among us was a valuable member of the crew. 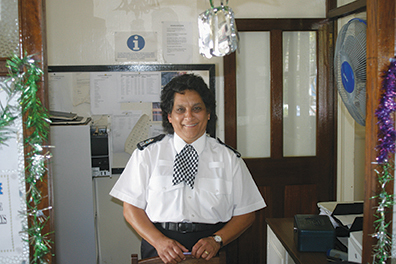 As we put the anchor down in the slight swell, we called Harbor Control to announce our presence, request clearance and discuss procedures. An exceptionally helpful woman with a British accent told us that the Customs officers would be out to meet us shortly, and we could get directions and useful information at the police station in town.

After the Customs officials cleared us in, we lowered our inflatable from the davits and went ashore to explore the refueling possibilities and find out more about the island. 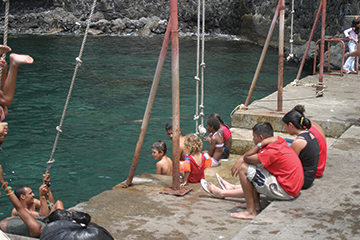 Motoring past local children diving off rocks and swinging from the ropes that would help us disembark from the dinghy to the dock, we made our way to the police station. The police offered helpful advice on who could assist with the refueling and who might be able to be our guide. The following day was December 30th, and if we could complete our refueling that day by ferrying jerry cans back and forth to shore, we might be able to arrange for a tour of the island on New Year’s Eve.

The fuel was delivered to the dock the next day by lorry. While one of our crew filled jerry cans dockside, two shuttled the containers to Icon, still at anchor, and the remaining two crewmembers emptied jugs by siphon hose into the boat’s fuel tanks. It was a long day, but the task was complete. Picking up a few vegetables and other things, we topped off our provisions and were ready to go. 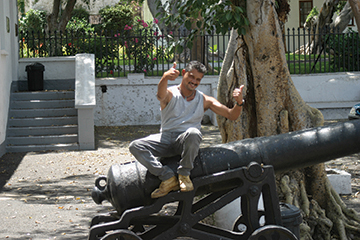 New Year’s Eve provided us with an opportunity to tour the island with a local guide who had lived on St. Helena virtually his whole life. The tour began with us trudging past old British colonial warehouses and into a walled city formerly guarded by ancient cannons. The clean, neat streets led uphill past gardens and spotlessly painted shops, government buildings, a bank, hospital and a hotel. Everywhere we went we were greeted by friendly, helpful people, busy with their respective tasks but never too busy to offer assistance. When I purchased a few postcards to send to friends and family, the lady behind the counter offered to take them to the post office for me when it re-opened after we were scheduled to leave. Even the town “troublemaker” insisted I go in and take pictures of the police officers in their station. Sitting on a large black cannon, he rejoiced at me taking his picture as well.

The half-day tour of the island took us up into the mountains around countless winding turns. Our guide pointed out the weather station, Napoleon’s quarters while in confinement, and the sole golf course covered by scrub brush. The eastern, weather side of the island is dry. But as the trade winds blow across the small island, clouds form and dump rain on the more lush western side of the island. 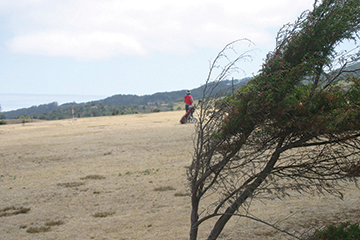 In order to accelerate and help that process along, a conservation area has been created on the eastern side of the island in which the local people are trying to re-plant trees and bushes long since decimated during the era of square riggers.

St. Helena’s western side is covered with lush green grass, cattle, forests and small farms. Donkeys are kept to help gather timber and firewood, with which the people cook or heat their homes on those few cold nights. Trees bend with the trade winds and grow in the direction of the breeze. Giant tortoises brought in as gifts from other parts of the world meander around the governor’s mansion. And old fortifications overlook all of it, seeming ready to keep the French at bay but now populated only by memories of soldiers long since gone. The stairway constructed to connect the city to the fortifications, built by the Royal Engineers, now serves as test of bravery and endurance for those willing to take on the thousand steps.

As the day came to a close, the townspeople slowly gathered at night to bring in the New Year. Brightly colored lights decorated the sole restaurant. Children chased each other or settled down at picnic tables to eat chicken or hamburgers, while the adults—wearing their finest clothes, neatly pressed—listened to music and danced.

The island, we’ve been told, has two Elvis impersonators. It lacks the glitz and glitter of Las Vegas, but it’s rich in other things—people who work to keep their little island friendly and neat, living off of much of their own produce and effort. And the pace gives one reason to consider what they have that we don’t in our more hurried “modern” world. Our initial impression of a craggy place nearly devoid of life was greatly altered in the space of a few days thanks to a brief re-fueling stop somewhere in the middle of the South Atlantic Ocean. As we got back to our own schedule, our original perceptions thoroughly tested, it was with a deeper appreciation for places without schedules.