From our boat anchored alone between cities off the Indian River on July 4th, with NASA’s iconic vehicle assembly building to our east, we enjoyed at least 10 fireworks shows. Complementing the professional shows were any number of 12 gauge aerial flares. While these were somewhat eye catching, overall they seemed fairly wimpy on this very clear night. Jill and I wondered if they would be noticeable at any distance in stormy conditions. As we approached departing for long-term cruising, we added “flares” to our “boat stuff” list of last month’s activities before we left. This started our search for the best way to make a visual commotion in an emergency.

THE ELECTRONIC ALTERNATIVE
Over the last several years, a number of electronic emergency signals have come onto the market as an alternative to pyrotechnic flares. LEDs have become brighter, batteries better, and lasers smaller.  Are any of these options ready to replace flares in a real emergency? 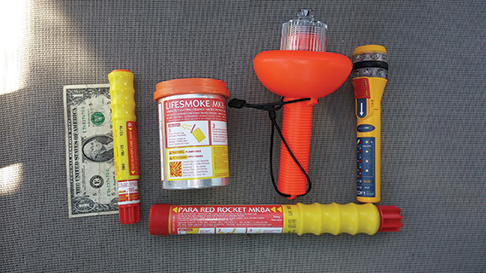 The US Coast Guard regulations provide for the use of a flashing light at night or a signal flag during the day as acceptable visual distress signals instead of pyrotechnic flares.  This regulation (33 CFR 175.130 “Visual Distress Signals Acceptable”) states that any combination of day and night signals in the prescribed quantities constitutes your acceptable legal minimum complement of visual distress signals.  For example, day signals include floating orange smoke flares while a red handheld flare counts as a day or night signal.  Of the pyrotechnic devices, three day and three night devices must be carried. So, three red handheld flares would suffice and is what most coastal sailors keep aboard to meet the minimum requirements. One can instead though carry a signal flag and an electronic distress signal light.
If you choose to meet the Coast Guard minimum requirements in a non-pyrotechnic way, not just any signal flag or flashing light will suffice. In fact, the requirements for the light are quite detailed in terms of brightness specifications and duration. Basically the light must be white, and be able, for at least six hours, to flash a Morse S-O-S at three second intervals with each dot being 1/3 of a second long and each dash, one second long. While indeed S-O-S has been the international distress signal for over 100 years, a rhythmic white flashing light is not the sort of signal that would get my attention compared to a SOLAS parachute flare, but we’ll discuss such flares shortly. 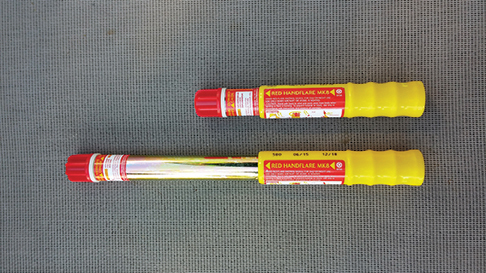 In June of 2015 Sirius Signal burst onto the scene with their SOS Distress Light as the first electronic visual signal to meet the Coast Guard standards.  This product ships with a signal flag to meet the daytime requirements. Anthony Covelli, CEO of Sirius Signals stresses that the point is not simply brightness here but rather duration. The Sirius Signal will flash for about 400 times longer than the best of flares will burn. The longer the duration of the signal, the higher the likelihood that the signal would be seen.

The Sirius Signal SOS Distress Light floats, has two wrist/securing straps which also serve to hang the device from a flag halyard, runs on three C-cell batteries, and uses a very bright LED, a conical reflector, and a clear cap with focusing lenses. The result is a 360 degree ring of light and a vertical beam of light. The light is visible at all angles but has a relatively narrow angle “hot” ring of light (in accordance with  the USCG specifications) beaming out the side and a strong vertical beam for aircraft overhead.

While not meeting the Coast Guard standard as an electronic visual distress signal because of its red light instead of white light, the Ocean Signal EDF1 electronic distress flare truly creates what could only be described as a visual commotion. This blindingly bright light uses a custom replaceable lithium ion battery pack that snaps on and off the head of the light. It offers multiple levels of brightness covering 360 degrees, a directional mode which beams the flashing light away from you, preserving your vision, and, yes, an S-O-S flash pattern. This light is truly hot in all directions, so look away when using its omnidirectional modes. Perhaps Ocean Signal will offer a model in the future that also provides a white output however multi-function devices are not yet approved under the USCG standard.

Laser flares are another option but these will likely never be approved by the Coast Guard in deference for avoiding the blinding of pilots.

WHY REPLACE PYROTECHNICS?
Remember those three flares every coastal boat carries?  All of those flares must be replaced when they expire.  That’s about 10 million flares entering the waste stream every year. That’s a lot of hazardous waste. Perhaps the worst part of that waste is the perchlorates contained in the flares. A 2005 study conducted by the State of Rhode Island (the home of BWS) concluded that a single improperly disposed flare can contaminate 240,000 gallons of water.  For this reason alone—getting out of the business of disposing of flares every few years—I would put a Sirius Signal distress light on our boat.  Perhaps most coastal sailors could go this way and eliminate pyrotechnics on their boats.

BUT WHAT ABOUT THE OFFSHORE SAILORS?
Near shore perhaps the electronic flares and signal flags might be adequate.  Further offshore and in worse weather conditions, with greater distances between vessels, the signals will have to be brighter and have longer duration. This is where SOLAS pyrotechnic flares come in.  A common 12 gauge aerial flare flies up to 500 feet in the air and burns up to seven seconds at up to 15,000 candela. In contrast, the Pains Wessex MK8A SOLAS red parachute flare ascends to 1,000 feet and burns for 40 seconds at 30,000 candela while a Pains Wessex Mk8 white Parachute Illuminating Rocket also ascends to 1,000 feet and burns for 30 seconds at 90,000 candela—twice the height, six times the brightness, and almost four to five times the duration of those 12 gauge flares! Now that’s a visual commotion! In good conditions, due to the height the flare ascends, it could be visible as far away as 46 miles. And back to those three inexpensive handheld flares on most coastal boats…they each produce only about 700 candela compared to a SOLAS handheld flare at 15,000 candela, over 20 times as bright.

PYROTECHNIC  SAFETY
When you use a handheld flare, you are playing with fire, sparks, and the hot slag dripping from the flare. Take the time to study your flares to understand, as silly as it sounds, which end to hold and how exactly to activate it. The best flares have pull cords, the lesser ones are scraped with a striker.  Some handheld flares telescope to put the fire just a little further away from you.  Next go through the motions by feel in the dark. When using a flare you should be upwind, looking away from the flame, and holding the flare at arm’s length so the slag can fall into the sea. Consider packing some safety glasses and gloves in your flare box.  You can also find demonstration videos which are well worth viewing at some of the manufacturers’ websites.

HOW WILL WE MAKE A VISUAL COMMOTION
First and foremost, we hope to never have to deploy our flares but if we ever do need to, we want to be sure we will be seen. Our liferaft is equipped with two SOLAS parachute rocket flares and three handheld flares. We supplement these with four additional SOLAS parachute flares, three SOLAS handheld flares, two SOLAS orange smoke canisters, and an Ocean Signal EDF1 electronic distress flare in a waterproof box in our ditch bag.  The Sirius Signal SOS Distress Light is also in the ditch bag, and with its signal flag, covers us for Coast Guard inspections and would be deployed as well.

If the time came, assuming the emergency was a rapidly progressing one, after activating EPRIB and IridiumGo! distress signals, and while making VHF and SSB DSC and voice distress calls, above all reporting our position, our first visual emergency signal would likely be switching on our ORCA masthead tri-light which has a white emergency strobe mode. The Sirius Signal and Ocean Signal electronic distress signals would be hung in the rigging but low enough to be quickly retrieved and taken to the liferaft if things came to that.  Then our private SOLAS fireworks show would be used when we could see or detect (visually, by radar, or by AIS) nearby ships or planes. When it’s time to be seen, you really want to be seen. Be ready to make a real visual commotion.

Over the last several years we have watched Pete and Jill Dubler’s restoration and refit of their Pearson 424. In December, they began their new life as cruisers aboard S/V Regina Oceani.