Newport, RI to Cowes, England: Now 896 miles from Newport, RI, and south of the Grand Banks, this is not the North Atlantic we imaged…are we headed to England or Antigua?

Yesterday morning (Saturday June 30), something unusual happened that tells you precisely the puzzlement we are all experiencing regarding the weather we are having at 42 North and 56 West…the North Atlantic. Henry emerged from his cabin in full foul weather gear: wool cap, offshore jacket, heavy bibs, sailing shoes and sailing gloves. At the same moment, Steve emerged from the forward cabin wearing his Nantucket red shorts, a polo shirt and no shoes. 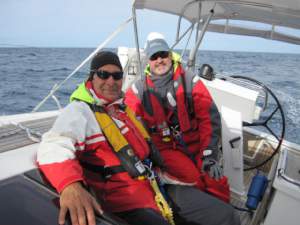 To explain, I have to go back to last Thursday (June 27), the day we sailed off the Continental Shelf and into the deep water. That morning when I stuck my head on deck before coming on watch to see if it would be shorts of bibs, Mark quipped, “Out here it is always too cold for shorts.” And that day he was right.

The forecast was for the southerly breeze on the west side of the Bermuda High to build to winds in the mid-twenty knot range and for the seas to rise accordingly. The forecast was right. By the early afternoon, Maverick was going well at 8 to 9 knots in 15 to 20 knots winds. The sky was gray and the seas beginning to build. Through the evening, as we were trying to figure out what the Clipper Fleet around us was up to, the wind had built to 22 knots with regular gusts to 26 or more. We had a full moon and a lot of scudding clouds, so the seascape was wild and dramatically lit. It reminded me of the line from the poem ”The Highwayman” that goes, “The moon was a ghostly galleon tossed upon stormy seas.” Check. That’s what we had. We shortened Maverick’s mainsail down to the third reef and rolled up half of the jib, but still she leaped along at 8.8 knots, crashing over waves and corkscrewing as her broad stern lifted suddenly on the swells. And Henry said again, “How do we slow her down?”

By dawn the wind was still in the 20s and the seas were large, menacing and breaking. The crew and the boat were fine. Mostly. After breakfast, while sitting in the cockpit, Steve and Henry took a full ocean comber, a rogue wave, in fact, in the cockpit. Green water broke right over Steve’s head and into Henry’s lap. How did they respond? Henry howled “Yeeoww. That’s a big one.” And Steve let out a huge laugh that said to us all, ‘Isn’t this craziness fun?” 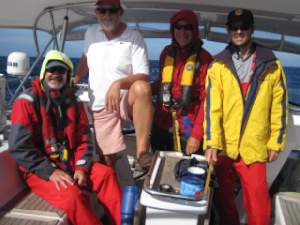 By mid-morning on Friday, the wind had abated, we had shaken out the reefs and were sailing in 15 knots over lumpy seas. After morning naps, we all emerged as new people having had really deep REM sleeps that washed away the tiredness. We gathered in the cockpit, ate one of Janet’s quiches and socialized for the first time in three days. It usually takes a crew three days to get its sea legs and we were no exception to the rule.

On Friday afternoon Steve downloaded a current forecast from PredictWind and saw something that looked interesting. A large high pressure system was building to the east of us over the northern North Atlantic that might give us a straight course to England. We might be able to skip 40/50 and sail northeast to our actual great circle course where we really wanted to be. After a call to Commander’s Weather and a consultation with the crew, Steve changed Maverick’s course. The move would save us at least 100 miles and avoid some dreaded calms.

Friday evening we dined on pasta and a delicious meatball and sausage sauce before commencing the night watch schedule. We’re using a four-on, six off watch that rotates crew in and out of watches and offers us different times daily. It’s working very well. We also are running Maverick on Greenwich Mean Time so when it’s 1730 aboard, it is really 1430 local time and 1330 at home. I think I am the only one who gets confused by this, since I don’t wear a watch. Luckily, everyone else gets it. Friday night passed with lumpy seas, a good moderate breeze and a bright full moon illuminating the seascapes.

Overnight, we sailed into cooler water that brought with it fog. This was more like it, we thought. Here’s the real North Atlantic. We even had a close ship encounter coupled with a GPS operator error (yours truly) to raise pulses. But all was well. 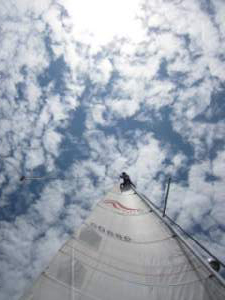 And then we were back into warmer water, a Gulf Stream meander, that did two things: it slowed us down by a knot and it warmed the air pleasantly. It was the recent history of high winds, lumpy seas, spray and waves aboard that prompted Henry to awake after dawn and decide that for his watch ahead he needed full battle dress. While, for Steve, waking in the forward cabin to a calmer sea and a warm breeze, he determined that shorts and bare feet were the dress code. Well, Henry was prudent but Steve was right.

By noon, we were all in T-shirts and shorts and enjoying tropical sailing. The joke was that this was just like sailing to Antigua in the Caribbean. Clear, sapphire blue water, 15 to 18 knots of wind aft of the beam and pleasantly small seas. This weather pattern has lasted for 36 hours as we sail at 7.5 To 8.5 knots toward our destination.

Where is the icy North Atlantic? Where’s the fog? Where are the whales and penguins and icebergs? Well, they are far north of us this year for many reasons and we are all the happier for it. 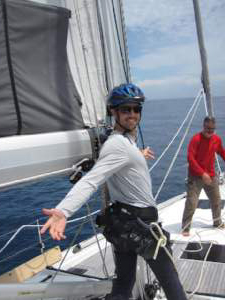 So, on a calm Sunday afternoon, while Maverick ferried us toward Cowes, Steve decided it was time for young Drew to go to the masthead to fix the bent Windex. Drew climbed into the brand new Petzl harness, donned a bike helmet and was hoisted up the mast looking like Spiderman as he ducked and dodged around shrouds, lazy jacks and spreaders. At the top of the mast, 75 feet above the boat and the ocean, Drew let out a huge, enthusiastic ‘Yeehaw, Yeah, Yeah!”

He repaired the Windex, shot some photos with his GoPro and was soon back on deck, totally pumped from the experience.

And then we rolled out the jib again, set the autopilot and carried on under a warm sunny sky, riding a fair current and warm westerly breeze toward England, and wondering all the time if we were really heading to Antigua instead?

Note: I’ll be posting BWS’s Facebook page regularly and on Cruising Compass every Thursday. Thanks for the support of Inmarsat and Ocens. You can track Maverick’s progress at