As we slowly rounded the rocky headland crowned with feathery pines, picturesque Poros town slowly revealed itself, taking my breath away. The terracotta tiled roofs gleamed in the late morning sun, the clock tower pointed up like a finger raised to remind us that it is almost noon and time to come ashore for a lunch of fresh bread, juicy tomatoes, briny olives and goat cheese.

I tore my gaze away from the pretty little town and began preparations for med mooring. Med-mooring, mooring stern-to with an anchor off the bow, seemed foreign and kind of unnecessary in my experience as a Caribbean sailor. The relatively shallow waters in the Caribbean gave us lots of practice at anchoring securely and catching moorings. 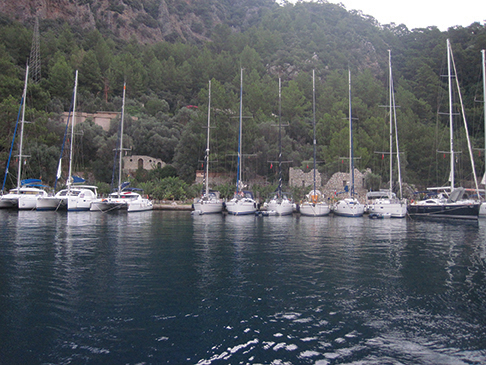 But, seeing for the first time those deep and steep Turkish bays, sometimes over 80 feet deep just a few yards from shore, it became suddenly easy to comprehend the need for Med mooring skills. Because of the depth, finger docks are impossible! Harbors are often very small and crowded, so boats must moor side by side with only fenders between. Stern-to mooring provides a space-efficient, stable configuration for mooring in tight quarters, and also provides an easier way to get ashore.

I smiled at how much I’d learned since my first summer of sailing with Captain Ron aboard Celador in the Mediterranean. That first time, as we pulled into the remote and beautiful bay at Bozukkale, Turkey, I had a hazy notion of what I was supposed to do. I was rescued by the friendly deckhands at Ali Baba’s. As we backed near to the dock, they leaped aboard and scampered to the bow with the “lazy line”, secured it in an instant, and galloped aft to finish the job before I knew it! With practice, I’ve become a more confident and competent hand at med-mooring.

Entering a harbor, Ron and I scout the mooring area together in preparation for the approach and he determines where we intend to tie up. We begin the approach by lining up the boat and beginning to back toward the quay.

I prepare the stern lines to cast by having them neatly coiled on the stern free of lifelines and rigging. If the stern lines are very long or heavy, it is useful to carefully coil each line into two coils, to split the coil. When it’s time to cast the line to a waiting dock hand or fellow sailor, cast both coils at the same time; they will be easier to cast and easy to catch. The dock hand then passes the line through a mooring ring on the quay and back to me. We repeat on the other side, and adjust and cleat them off on the boat. Later, when we depart, we simply pull the lines through the rings and back to the boat as we go. 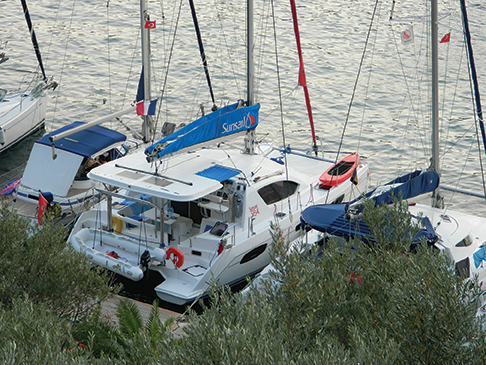 Some harbors have fixed moorings, a permanently-set anchor, weight or chain with a stout rode to which a smaller leader line, or lazy line, is attached, which is secured to the dock. I pull up the lazy line to retrieve the fixed mooring line, leading it forward, outboard of all the standing rigging, and take a wrap around the cleat on the bow. There, I ease it as necessary while keeping it taut, and secure it when the stern lines are adjusted to the proper length and cleated off. The proper length, of course, allows for us to get ashore, either by means of a passerelle or gang plank, or by a long step from the stern to the quayside. It should also preserve enough distance to prevent a surge from smashing the stern against the dock. This means that having the mooring line as taut as possible is a necessity. Once the stern lines are where you want them, you can use the engine to pull forward to help when tightening the mooring line. Fixed moorings are always a welcome sight, and their presence is indicated in most cruising guides of the Mediterranean.

Arriving in beautiful in Poros town, however, there are no fixed moorings. Instead, we must drop the anchor to secure our bow. Once we identify the area we intend to moor, Ron checks the chart to find the depth in the area where he intended to drop the anchor. When I’m on the bow and waiting to drop the anchor, he updates me on depth when we start to get close.
It is important to get the anchor down to the bottom quickly once the order to drop is given, as often it is very deep and the boat is continuously moving toward the mooring space. In order to get the anchor on the bottom quickly, I release the windlass brake with the manual lever, and let it fall, fast but controlled, until it reaches bottom. Having easily visible, colored marks to measure your anchor chain makes this easy.

Once the anchor is on the bottom, I tighten down the brake on the gypsy and use the electric winch to lay out chain as we back in, or I may continue to lay it out manually at a pace to match the boat’s. Having enough scope is important in Med mooring as it is in conventional anchoring. A scope of at least five to one is necessary; we Americans are often teased about putting more out, and I like to use seven to one when I can. 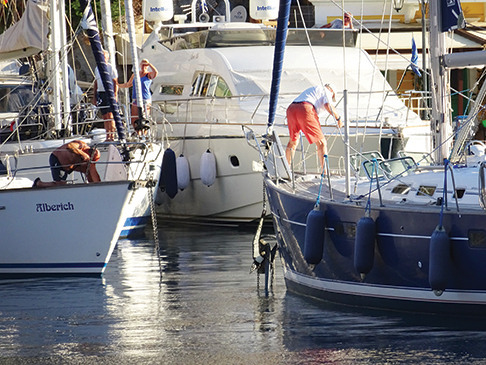 We toss the stern lines to waiting hands ashore, and I get back to the bow to tighten up the anchor chain once the stern is secured. In this way we can learn whether the anchor is set properly, as well as making sure that it’s tight enough to prevent surge damage. I rig the snubber, and we meet in the cockpit for our celebratory glass of good white Greek wine.

Often, the tiny harbors of the Greek Islands are crowded with boats, and “anchor chain spaghetti” is often on the mooring menu. As yachts come in to moor, they often cannot avoid laying out chain over the top of chains of earlier arrivals. Whenever a boat departs, the possibility of entanglement is present.

There’s no use shaking a fist; just try to keep your good humor and stand by to take appropriate action. This may involve raising our fouled anchor up with the windlass and getting a rope under the chain that overlays ours. We lift up the fouling chain as much as possible and cleat off the lift line, then raise our own anchor underneath it, guiding the chains with a boat hook as needed. Once our anchor is up, we release the chain we’ve lifted up. All while keeping the boat clear of others! This can be tricky when the wind is up, when there are several chains involved or when the ferry is coming in! 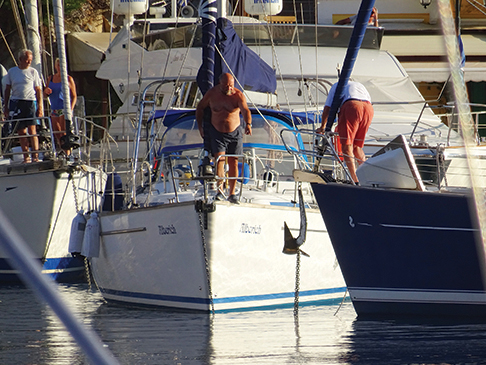 In some small harbors, it may also be necessary for yachts to raft up, since no space for mooring on the quay exists. We were one of the earliest boats to arrive in the lovely, tiny, crowded port of Hydra, and we got the last spot on the quay. As the day went on, one boat rafted up off the bows between us and our neighbor, and another to him and so on, until boats were rafted four deep from the quay! Fortunately for us, the folks on the outboard boats walked over our neighbor’s boat to get to shore, rather than ours.

Again, this is clearly described in the cruising guides, and it’s best to stay cheerful. I’ve found it more fun to offer newcomers a little glass of wine rather than shouting. It’s a delightful surprise for them, and you will meet the most interesting people. Who knows, it may be your boat that comes in last to raft up when you finally arrive in magical Santorini! It’s all part of the wonderful adventure of cruising the Med.