Halfway across the ocean, their spinnaker came down and got tangled in the keel, rudder and prop. Here’s how they got going again.  (published July 2013)

So, this was a fine mess we’d gotten ourselves into. We were in the middle of the Atlantic Ocean onboard Azure, a 40-foot cruising boat—with no sails up. The only sail we had flying was now wrapped under the keel and possibly around the rudder and propeller as well. The trade winds were blowing a steady 15 knots and friendly four foot seas rolled beneath us.

ON PASSAGE
Let’s go back half an hour or so to a more agreeable situation. It was late morning on a beautiful day 800 miles southwest of the Canary Islands, and we had made a good start on our trans-Atlantic voyage. Azure’s owner, Dr. Harold Kernodle of Chapel Hill, North Carolina, had bought the Pacific Seacraft 40 six years earlier and achieved a lifetime dream of sailing her from the United States to the Mediterranean. He and his family had cruised the Mediterranean, Adriatic and Aegean Seas over the last few years and were now headed home.

I had offered to join Harold, together with his life-long friend Dr. Donald Mundy and Kevin Gallagher from Washington, D.C. for the passage to the Caribbean and this was to be Kevin’s first ocean passage. Azure was now on the last leg of this odyssey, and everything had been planned for the 2,900 miles of open ocean to St. Lucia.

We had departed from La Gomera, one of the southern-most islands in the Canaries archipelago. The island was the stepping-off point for Christopher Columbus on his first voyage, and we had indeed visited the church where Columbus genuflected before the altar over 500 years earlier, also praying for a safe voyage.

The voyage had begun well as we found the steady trades that allowed us to broad reach down our course at nearly hull speed, pulled along behind our Parasailor spinnaker. Occasionally we were joined by pods of porpoise crisscrossing through our bow-waves. Things could not have been more perfect.

Sometime later, we heard a loud pop from the masthead and before we could react, our super spinnaker was gracefully floating down into the Atlantic Ocean as Azure continued at seven knots directly over it. Seven months of meticulous preparation and here was the first crisis.

After a minute, someone remembered that the transmission had been shifted into neutral a day or two earlier and the rapidly turning prop was greedily devouring our beautiful sail. An ominous silence from the no-longer turning transmission confirmed this. We were alone with just the swish of trade wind driven seas sliding past our stricken vessel.

SHRIMPING
The Parasailor is a symmetrical sail designed to enhance a cruising boat’s downwind performance, without the use of a spinnaker pole. An ingenious system of interchangeable guy lines allows the sail to be flown from a broad reach on one tack, through a dead down wind run to broad reach on the opposite tack. The sail jibes very smoothly and is rated to be flown in apparent winds of up to 30 knots. It’s a multipurpose downwind wonder sail that can be flown without the aid of the mainsail. Now, it was under the boat and we were doing what racers call “shrimping.” 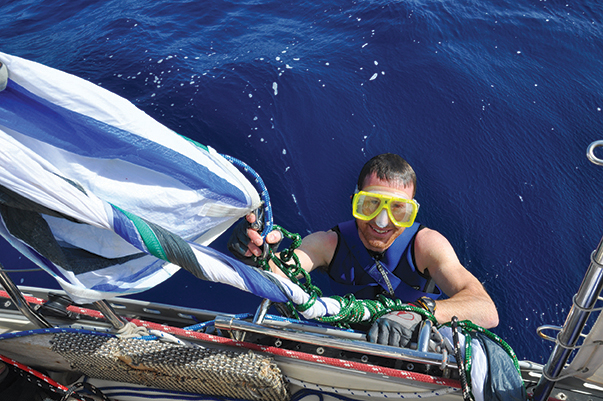 We gathered in the saloon to put together a plan to retrieve the sail. We had no other sails up and could not start the engine because of the fouled propeller. Kevin Gallagher, our super-fit crewman, offered to go overboard with a knife in his teeth to take care of the problem, so we needed to plan how he could do this in the safest way possible. We needed to stabilize the yacht’s movement, so we decided to heave to.

First, we had to hoist the mainsail so we could round the boat up into the wind before setting the backed genoa. Of course, the wind direction was not cooperating. The boat was lying nearly stern to the wind, which made hoisting the mainsail difficult since the sail slides and battens were pinned against the mast and spreaders.

As we rolled laboriously, we stored the lazy jacks to allow the mainsail to be raised, and then set about hoisting it. With 75 percent of the sail hoisted, we slowly got underway. It was also necessary to roll out 50 percent of the genoa to give us enough boat speed to turn upwind with the big sail dragging beneath the hull. We slowly brought the boat head-to-wind and tacked over-without releasing the jib sheet to get the half rolled out genoa to backwind. By reversing the helm so it was angled to steer up wind, the boat gradually settled at about 60 degrees off the wind and virtually stopped.

Kevin donned a harness and diving mask and we then carefully lowered him over the windward side of the boat into the water. He was secured to the boat by a 30-foot line that was led forward to prevent the boat from slow sailing away from him. 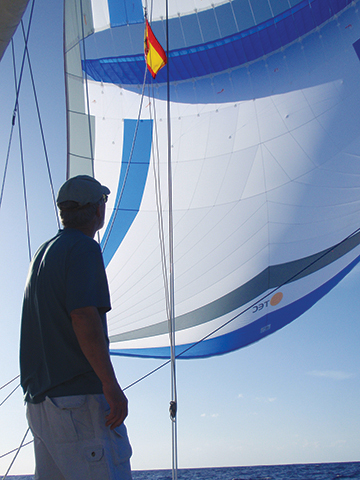 Two crewmembers carefully controlled the line while Kevin worked five feet under the water. Kevin repeatedly dove down to clear the tangled mess, holding his breath for long periods. Twenty minutes later, he emerged triumphantly with spinnaker clew and lines intact. We hauled him and the undamaged Parasailor back on board and celebrated by getting Azure underway again with well-earned sundowners raised in our diver’s honor.

Tony Wall is a professional yacht captain, delivery skipper and sailing instructor based in Florida.

On trade-wind passages, once you are well offshore there is no going back the way you came.  It isn’t until something causes you to stop and turn around into the teeth of the relentless trade winds and waves, that you realize how alone you are out there.

The consequences of making further mistakes can be sobering. What if the overboard crew is injured in the process? Although Azure was hove-to, there was still a considerable motion in the swells. What if the crew becomes disconnected from his lifeline?  Spotting a swimmer wearing a charcoal colored wetsuit in dark blue-grey seas would have been problematic to say the least. In addition, we had extremely limited maneuverability to attempt a man overboard rescue.

But a repair had to be attempted. The way things were, we had a fouled propeller and a possibly destroyed spinnaker with 2,500 miles still to go. A willing and able crew, a little bit of luck, and a sound plan to tackle the problem, all made for a successful outcome.

Here are the lessons we learned and what we did wrong:
• We carefully put a plan together with everyone assigned a role, using good signals and communication.
• Heaving to gave us a stable and secure platform from which to execute the repair.
• We did not go into panic mode when the spinnaker fell, situations such as these could easily start a cascading series of problems.
• We secured Kevin with a forward-facing halyard but not the spinnaker halyard since we could not get a fair lead for the halyard over the side of the boat.
• We were equipped with a snorkel, mask and sharp knife. A serrated blade is best.
• The partial wet suit was useful; however, a brightly colored swim cap might have helped locate our diver if he became detached from the vessel.
• Had we had a double-reefed mainsail hoisted before the spinnaker came down we would have had directional control more quickly.
• We decided to move the transmission into neutral, which allowed the propeller to freewheel. Usually, I move it into reverse under sail. However, make sure you check your engine and transmission manuals for the manufacturers’ recommendations.