Concluding our cruise of the Cyclades on the island of Milos, my husband and I did the usual Med moor to tie up at the quay in the port of Adamas. Making our lines fast, we casually asked our Swedish neighbor for his opinion of the location.

“Terrible!” he answered, recounting how his beautiful, self-made fiberglass sloop had been dashed against the quay a month prior when the nearby ferry powered off at full engine. The stern had been holed against the concrete structure, and the Swede was able to repair it only after undamaged boats on either side winched his stern just above the waterline. Now he was back to make a quick passenger pickup.

Naturally, this information made us reconsider our plans. We had our minds set on a convenient quayside location from which to prepare for our upcoming passage to Malta. Anchoring in the gusty harbor seemed impractical and exposed, so we noted the ferry schedule and tied very long lines to the quay, shuttling ourselves across the gap with our dinghy, which also served as an emergency buffer. Twice a day, we were on board, suspiciously eyeing the ferry with our engine running. Unfortunately, one of the departure times was 01:00, making us feel like we were keeping night watches without the solitude and quiet of the open sea!

We threw in the towel after two sleepless nights and anchored instead. 30-knot winds gusted and wailed, but we were safe from the worse of two evils—the ferry wash. What a difference! The dinghy trip was not all that inconvenient after all, the anchor held reliably, and the distance was worth the privacy we gained. For the novices that we were then, it was a revelation. From then on, we usually chose to keep our distance from the seductive siren call of land. Thanks to the Swede, we did not have to learn this lesson the hard way! 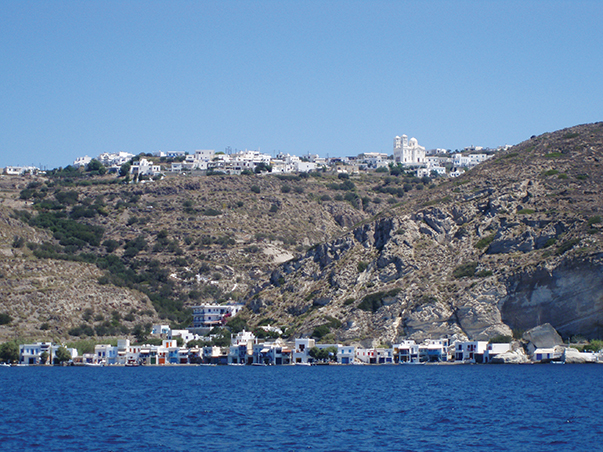 And what draws those ferry passengers to this particular island? Milos offers all the charms of other Aegean islands without the overwhelming crowds of Mykonos or Santorini. An inexpensive public bus service connects the whitewashed towns and beaches of the U-shaped island, while spooky underground catacombs offer a respite from the summer heat. Sailors can stretch their legs by exploring quiet ruins dotting the rocky hillsides—including the discovery site of the graceful Venus de Milo, one of the great masterpieces of Hellenistic art (alas, like many of Greece’s art treasures, she was crated off to Paris two centuries ago and now resides in the Louvre).

Otherwise, we found everything we wanted in Milos: friendly, patient people, stands serving tasty gyros, and endless views of the glimmering blue sea. Not to mention the cruiser’s lifeline to weather and news—the Internet café. The only thing we were looking forward to leaving behind in Milos was the ferry!

View all posts by Nadine Slavinski