Keeping your battery bank charged and in good condition so you always have enough 12 volt and 120 volt power is a key element of modern cruising. Without question, the energy system designed to provide modern cruising boats with energy independence over the long haul ends up being the most complex and interdependent system on the boat.

MONITORS
A quality battery monitor will be a useful tool to keep an eye on the health of your battery bank and monitor the charging systems that you have working to maintain the bank’s charge. While you can get by with simple volt and amp meters that will give you the basic information you need—voltage levels and amp draw—a dedicated monitor will provide a lot of useful data on the charge state of the bank, its history and its potential for holding a charge going forward.

A good monitor will be able to track charge cycles and will help you monitor the gradual degradation of the battery bank over time. Plus, you can keep an eye on the draw against the bank and the time you have before you will need to charge the bank again.

There are several monitors that are popular in the cruising fleet, including the LinkPro, Blue Sea Systems, Mastervolt and Argus. All of these will keep an eye on voltage, amps and amp hours, and all need (and come with) a shunt for measuring amps. Plus, you can monitor your alternate energy systems—wind, solar and water power—so you will know how efficiently these useful tools are topping up the battery bank.

SMART CHARGING
A standard alternator that comes with a marine diesel will have a low output alternator designed to maintain the starting battery. But, cruising boats have many electrical needs and are always fitted out with large house battery banks that require a lot of charging via a shore power connection or by a high output alternator.

Your shore connection will require a 30 or 50 amp rated cable and connections and a battery charger that can deliver the amp output that you will need to keep your battery bank topped up. The size of the battery bank in amp hours and the frequency of charging will dictate the size of the battery charger you install. If you leave the boat at the dock most of the time, the batteries will want to be trickle-charged by a low output charger—say 20 amps. If you are against the dock occasionally, you should opt for a high output charger of 50 or so.

You also want to take into consideration the type of batteries you will be charging since the acceptance rate—the amperage the batteries can accept—varies. Wet cell batteries can accept about 25 percent of the bank’s total, while gel cells accept 30 percent and AGMs can accept up to 50 percent. A gel cell battery bank of 300 amp hours can take up to 100 amps at 14.1 volts, but for dedicated shore power charging, 50 amps will be plenty of output from the charger.

Long-life marine batteries will survive the longest and deliver the most reliable energy supply if they are charged using the “Ideal Charging Curve.” This is also called “smart charging,” because the charger delivers the charge at voltage levels that optimize the battery bank’s acceptance rate and then maximizes the top end charge to achieve a total charge of more than 95 percent.

Smart charging will rapidly replace the battery bank charge to very close to maximum and then maintain the full status for as long as you remain plugged into shore power. All top of the line chargers will be set up with three-stage smart charging capabilities. It is worthwhile to make sure the unit you choose also has a battery temperature sensor that will shut it down if the batteries start to overheat.

INVERTERS
Adding an inverter that converts 12 volt DC to 120 volt AC to the boat’s electrical system will allow you to quickly charge cell phones, cameras and computers and will enable the use of a television, microwave oven, hair dryer and power tools. Inverters come in a wide range of outputs, from small units that put out 100 watts (which will charge battery-operated devices) to units that put out up to 4000 watts (which will run a small air conditioning unit).

For most cruising boats, 1000 to 2000 watts will be plenty of output, but you will have to audit the consumption of the gear you want to run on the inverter to get an accurate forecast of how many watts you need to supply.

Inverters are divided between modified sine wave (MSW) and true sine wave (TSW) units. MSW devices are less expensive and tend to output a less than uniform flow of AC current. If you have low demands and will not be running sensitive equipment such as a laptop or stereo, then an MSW inverter will be suitable. But, if you will be running a television, laptop, stereo or other devices that need a constant, even voltage, then opting for the slightly more expensive TSW inverters will be the right choice.

An interesting solution to the charger and inverter question is to go with one of the large charger-inverters on the market. These tend to be sophisticated three-step charging devices married to a high output inverter. The inverter output from these combined units will run from 1000 to 4000 watts. 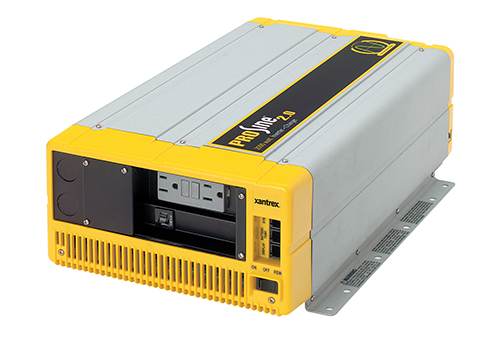 If you know that you will have a lot of 120 volt AC demands but want to avoid the cost and maintenance that go along with a diesel-powered generator, you might want to look into building an extra-large house battery bank and installing a high output charger-inverter that will charge the batteries quickly when plugged into shore power and will run all of your appliances and a small air conditioner off the inverter.