Of all the islands in the South Pacific I’ve sailed to since 1974, tiny Mopelia (Maupihaa in Tahitian) is the most unforgettable. Lying 150 miles west of Bora Bora, Mopelia is a cruiser’s dream come true, but it can be a real challenge.

A classic coral atoll, the island resembles a necklace of islets studded with coconut palms on the windward side and a 60-foot wide, half-mile long coral pass into the lagoon on the leeward side. The pass can have up to a 9 knot continual ebb current with a wall of breakers across the entrance, but at other times we’ve measured a 1 knot flood and glassy calm conditions. Once inside the lagoon, there are several anchorages to choose from depending on the wind strength and direction. In normal trade winds (12 to 15 knots east-southeast) we generally head to the far southeast corner of the lagoon where there is little fetch and a fairly secure anchorage in 12 to   30 feet of sand among coral heads.

This island has a lot appeal to cruisers; clear 85 degree water, a few friendly Tahitians living ashore, no government representatives or radio, and for those who’ve run out of time on their French Polynesia visitor’s visa, this is very welcome. There’s also plentiful fish in the surrounding waters and lobster and reef fish inside.

Mopelia’s most notable visitor was a WWI German pirate-adventurer, Count Felix von Luckner. In the early days of WWI, von Luckner disguised his heavily armed sailing ship, the Seeadler as a merchant vessel and sank 15 Allied ships in the South Atlantic, mostly unarmed trading schooners. As he was a true aristocrat and gentleman, von Luckner would entertain his captives in fine style after stripping their ships of cargo and supplies, and sinking them. He even shared champagne after capturing a French ship loaded with it. When he got too many captives aboard, he would set them all on a captured ship to make their own way to the nearest port. One of the captured ships carried a substantial amount of gold bullion, and this is the start of the mystery of Mopelia’s missing treasure.

When he learned that Allied ships were closing in on him, von Luckner ducked around Cape Horn and hid out in the Patagonian canals for a few months before setting off for warmer climes in search of food and water. He briefly shelled Papeete, Tahiti then anchored off Mopelia’s pass, going ashore in Seeadler’s 18 foot motor launch to happily discover the island had no radio transmitter but did have a crew of three Tahitian contract workers who were there to raise pigs and chickens and collect turtles and copra (dried coconut).
The Tahitians put on a huge feast for Seeadler’s hungry crew with pigs, chickens, lobster, fish and coconuts. One day while ashore collecting food and water, a passing squall caused Seeadler to snap her anchor chain and drag ashore onto the inhospitable coral reef where she was holed. Von Luckner and volunteers rigged a longboat with sails and made it 1,500 miles to Fiji before being captured. After WWI, von Luckner returned to Mopelia on his private sailing yacht but we’ve never heard if he was able to retrieve the missing gold. 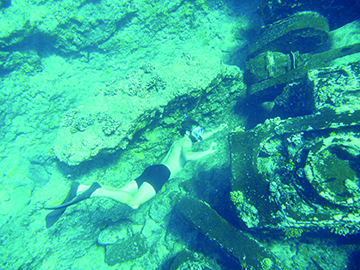 Amazingly today, 98 years later, there’s plenty of Seeadler wreckage left: anchors, windlass, the rudder, shell casings, piping and tanks, and a large, two-cylinder engine—all in under 15 feet of very clear water, just south of the pass entrance. We’ve anchored just outside the pass next to the wreck many times and swum with our inflatable to explore the strewn remains.

My first visit to Mopelia was around 1980 and at that time 30 people lived on the island. I spent an amazing week getting to know a just-married young couple, Adrienne and Marcello who had left their home island of Maupiti, 95 miles away to have a grand adventure and start a family. At night following beach bonfires and potlucks we went hunting for lobster on the outer reef and during the day I helped them weave fronds to build their dream thatch huts on stilts overlooking the lagoon.

Years later I learned a cyclone had leveled the island and when I anchored off Adrienne and Marcello’s property the only trace was the crumbled remains of their cement cistern. Last year when I caught up with Marcello, after 35 years, he said that they’d received a warning the cyclone would hit. In preparation they each climbed several coconut trees and chopped off the top to reduce windage, emptied out the deep freezer, punched holes in the top, put their two small children inside and tied it securely to a coconut tree. Then they each climbed a coconut tree and tied themselves to the trunk. The island was completely washed over, and only a very few frondless palm tree trunks remained. But they survived. The French government in Tahiti had sent a ship from Tahiti to take the inhabitants back to their home island of Maupiti, located 30 miles west of Bora Bora.
For many years Mopelia’s only inhabitants were Hina, a young, attractive and strong Tahitian girl from Maupiti plus a reclusive Frenchman named Freddy and his Tahitian wife, and occasional groups of copra workers from Maupiti. Hina loves the diversion from working copra that visiting cruisers bring, especially when someone is a guitar or chess player. Every time we’ve visited in the past 20 years we always ask if we can have a potluck dinner at her place and she always says yes, reminding me to bake a huge batch of brownies. An open invitation is given to all the yachts in the anchorage to also bring musical instruments and on our last visit, Edgar, a Tahitian guy living a little ways down the beach, brought coconut crabs and Hina had gone free diving on the outer reef for lobster. It’s an evening no one will forget.

I always ask Hina if she needs anything—sometimes she’ll ask for cooking oil, onions or garlic, but inevitably, she’ll say, “And don’t forget to bring ice cream next year!” As she has only a tiny Honda generator she uses for lights, anything cold must seem a real treat. Amanda always teases Hina, saying, “We’ll bring taro and coconut ice cream” to which Hina turns up her nose, saying, “chocolate!” This year we remembered, and brought Hina ice cream bars from Bora Bora. Polynesians think it rude to eat while guests are present, so I had to repeatedly urge her to enjoy her ice cream before it turned into a puddle in the 85 degree heat.

After enjoying our recent visit with Hina, a windshift to the northwest caused by a passing cold front turned the normally protected anchorage into a choppy lee shore, so we motored three miles upwind, dodging occasional pearl floats to anchor off Adrienne and Marcello’s compound. They’ve now built a couple houses, have a backhoe, speedboat and truck on the beach and were as friendly and outgoing as they were 35 years ago. They’ve now been joined by two daughters and a son, and having seen us enter the pass they were planning a feast, unfortunately the frontal passage meant that soon the wind would be out of the west, possibly making the pass impassible. We wanted to stay longer, in fact Adrienne tried tying Amanda to a coconut tree to get her to stay, but we had to settle for a short visit and sad goodbyes.
The pass turned out to be a true maelstrom and getting through without bouncing off the reef on either side required total concentration with quick helm inputs. Amanda gave the bow thruster control to one of our crew to give even more control at the narrowest part and we took two walls of standing green water over the bow before we were clear of the breakers. We were very thankful for our trusty 95hp engine and 3-blade Max Prop. 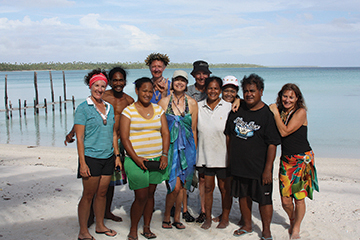 If you plan on sailing to Mopelia, first stop by the mayor’s office on Maupiti and ask Hina’s father, who works there and owns a little store across the street, if there’s any supplies that need to be taken to Mopelia. And if you have a freezer aboard, try to squeeze in a container of chocolate ice cream to surprise Hina with!