As a bit of a tomboy, I’ve always felt somewhat deficient around women who can knit hats and effortlessly produce pastries, all without mussing their glossy hair à la Nigella Lawson. So when I put to sea in a primitive sailboat without even an electric anchor windlass, let alone an inverter capable of powering a hair dryer, I thought I’d found a good excuse for not being Nigella. Instead of testing my perfect caramel flan while letting my smartphone softly illuminate my lightly powdered cheeks and rouged lips, I crawled into the lazarette of our 38 foot classic—and ancient—Sparkman & Stephens cutter Heretic to replace the equally ancient propane hoses.

Afterwards, I generally produced one-pot chilis or paellas. Then I met cruising women who baked cakes and sewed their own courtesy flags. The best I could do with a needle was to stitch our aging mainsail back together. I actually enjoyed baking, but I didn’t have an oven so I couldn’t compete with their beach potluck contributions.

My husband and I did fine without refrigeration or baked goods for the first three years of our circumnavigation, but one day we were out of bread and rather peeved about it. We were anchored within a mile of the town on Cocos Keeling atoll in the Indian Ocean, which, despite its remote location 2,000 miles from Australia, does sell bread. But consistent 25-knot winds discouraged frequent trips in our eight-foot rowing dinghy. So I opened up Hal Roth’s How to Sail Around the World, where I found his bread recipe. The recipe is for a pressure-cooker loaf, but our pressure-cooker hadn’t worked properly for years, so I adapted it for my hard-anodized frying pan.

The loaf was so tasty—and so simple to make—that we were never without bread again, even on the notoriously windy crossing to South Africa. I often experimented with sweet and savory variations and dreamed up two of my favorites on precisely that passage. 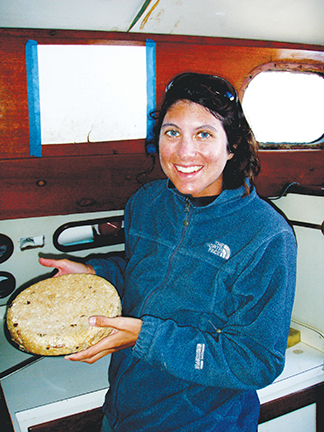 Method:
In a large mixing bowl, dissolve sugar, salt and yeast into the warm water. Let stand 5 minutes. Stir in flour with a wooden spoon.  Knead the dough for at least 5 minutes, preferably 10.
Cover bowl with a clean dishtowel and place it in a warm corner of the boat, away from drafts. Let the dough rise until doubled, about 1.5 hours.     Grease a large, deep and heavy frying pan. Hard-anodized aluminum or cast iron is best. Teflon won’t retain enough heat. Sprinkle the greased pan with uncooked oatmeal.
Punch down the dough and place it in the pan. Cover and let rise again until doubled, about one hour.

Place a heat distributor (flame-tamer) on your gas burner and put the pan on top. Turn the burner on low. Cover the pan with its lid and insulate the lid with potholders to retain heat. Bake for 45 minutes to an hour.  When the bread is done, a knife stuck into it will come out clean.

Note: This can also be baked in an oven. Just grease a traditional bread pan instead of the sauté pan and bake at 400°F for one hour.

Sweet: add a little more sugar to the initial yeast mixture and add a few handfuls of raisins, chopped dried figs and chopped walnuts to the dough before kneading. Omit the oatmeal coating on the pan.
Savory: add eight to 10 chopped and pitted black olives and a handful of fresh rosemary (stripped from the stems) to the dough. Include the oatmeal coating. I made this in Cape Town for a cruiser get-together and the entire loaf was gone within 15 minutes!