NOAA recently announced that the U.S. government is discontinuing printing of the traditional lithographic paper charts in April, 2014. The reasons given include the popularity of e-charts, and more to the point, the NOAA print on-demand (POD) paper charts have now gained wide acceptance. Agents who can sell both types of paper charts sell some 80% more of the POD than of the traditional litho charts, in large part because when they get back to the ship the navigators know the charts are up to date. “Federal budget realities” was also mentioned, but this is not a predominantly economic decision, even though traditional litho charts have been heavily subsidized.
At the time of writing, this transition is still six months away, so we do not know what options will arise between now and then. But it is clearly a change in direction that could be expected given that many books are now published in this manner, and the percentage is growing steadily. As prices go down and quality goes up, even more books will be printed this way. It also has the virtue, similar to nautical chart printing, that even rarely sold books can now be printed and made available without increased costs, not to mention that each printing is the latest edition or version of the book. Only the master file has to be changed. In contrast, traditional book printing yields warehouses full of books, with or without known errors in them.
At present POD charts cost a few dollars more than litho charts (same as in book publishing), but the masters are updated weekly and the charts are readily available. Granted, there are not many authorized sales agents who have the printing capability in house, so we will not have as many places to walk in and buy them, but they can be purchased by mail order or online from authorized agents. Another trend that is not unfamiliar.
We already took one big hit in chart distribution when the printing of nautical charts was transferred to the Federal Aviation Administration in 2000. In recent years, the FAA proceeded to close all but the largest chart agents. This will be another step in that direction. But we still have need for conscientious chart agents who provide advice on selections and who might stock samples of the charts for us to view in full form—or they will guide users through the excellent online chart viewers at NOS. Then after selection, they either print the chart on the spot—if they have the facilities—or they order online to be shipped either to the store or direct to the customer. Chart selection is an important part of navigation, so we look forward to keeping the agent support we have grown accustomed to.
The POD chart process has been long tested, but it can still improve, and it likely will. Up until March of 2012, there was only one NOAA-certified print-on demand provider (oceangrafix.com), but now there is also East View Geospatial (geospatial.com), which offers not only updated NOAA charts, but also nautical charts from around the world. These two companies, both based in Minneapolis, MN, have different options and paper choices.

LITHO VS POD
We will have to see how things develop. For now, one sample of an early OceanGraphix POD paper we tested is not as durable as the litho charts. It definitely tears more easily, but it responds to multiple folds in about the same way. Water runs off this POD paper more readily, but it did not respond well after being wet for a long time. Traditional litho charts, on the other hand, can be soaked in saltwater and wadded up, then dried out and ironed, and they look remarkably good. Neither type of chart likes to be rubbed when it is wet, but this sample POD chart liked it a lot less. You can easily make smears that obscure the printing. If they get wet they should be carefully patted dry and then set to dry thoroughly.
The main difference we detect is how they erase. If anything, they take pencil lines even better than the litho charts, but some do not erase well at all. Normally we recommend not erasing past routes as you might go there again and benefit from your past tracks, but we all make mistakes in plotting, and these mistakes are very difficult to remove on some POD charts. Again, I refer to the present paper in use by just one company. Once POD is the only option, we expect the technology will improve. Or maybe someone will invent a special pencil for writing and plotting on POD nautical charts. East View Geospatial has four paper options, and we will test these with a follow up report as soon as possible.
The UK and Canada also offer POD charts, and I understand they have also been well received, and may use a different type of paper.
If you have not used one of these charts in the past, you might find it valuable to buy your next chart in that format to see where we are headed. Maybe try a sample from each outlet. If you really want a set of the latest and last litho charts for your region, you may want to buy them now. There is a chance they have already stopped printing some charts and are relying on existing stock, knowing there is no new edition on the horizon. You can stay informed on the chart news by monitoring the excellent nauticalcharts.noaa.gov website or by following @nauticalcharts on Twitter. 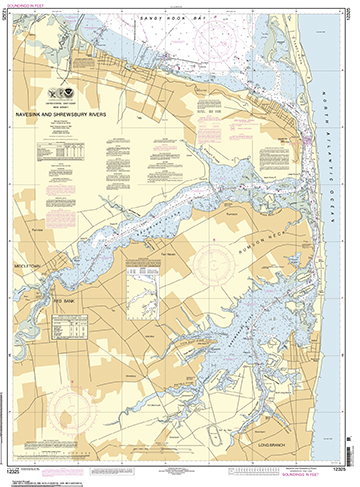 From a practical point of view for many mariners, paper charts are a back up to e-charts. And it won’t be long until the back up to an electronic charting system (ECS) is a second ECS. NOAA has already begun producing free tablet apps to read their e-charts as well as the GPS and display relevant Coast Pilot data at places of interest. There are numerous commercial ECS apps that do this as well. Nevertheless, mariners are rightfully conservative and do not want to be 100% dependent on electronics, so some form of printed chart will be with us for a long time, and with other new changes at NOAA we have related options.
NOAA now offers free high-res PDF files of the full nautical charts. It is a brand new system and we have to see where this goes as well. But now we have options of our own. In principle we could print our own charts, but large size color printing is very expensive (about $7.25/sq. ft. or about $80 for a 3 ft. x 4 ft. chart). In lieu of a full chart, we can crop a PDF and just print the part we need. In some cases for local sailing you might need just one corner of the chart. Or print the chart on 11 x 17 inch paper in sections and make a custom booklet. 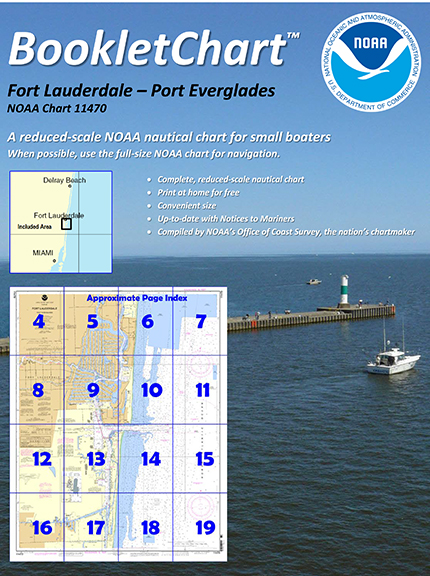 If you do want the full chart in printable pieces, NOAA has had this option for several years, though now these are updated automatically, just as the POD charts are. They are called BookletCharts. These are very nice products, and you can print them on letter size or tabloid size (11 x 17) paper and have a nice set of chartlets.
On the other hand, if we are thinking of backups, then we could use a gray-scale print, and these are more like 75 cents per sq. foot. A gray-scale chart would be about $9, much less than they are now in color (about $20). This would not be a good choice for routine navigation, because so much information is in the color, but it would serve as a good back up.
Once we do print our own charts, or buy some that we do not want to replace with every new edition, then we should look into the process of updating the charts ourselves. Recreational vessels have this option, but some commercial vessels are required to carry the latest edition, and needless to say, we recommend using the latest editions or updating if not.

This is an easy process. The corrections are all online (www.nauticalcharts.noaa.gov/index.html), and well organized by chart number–and by chart edition, if you have to go back several editions. There is also an option to print out a text list of the corrections that you can take with you if you don’t get to the updates before departure. Normally it takes just a few minutes to update a chart from one edition to the next, which is a big savings, and a worthwhile exercise. The more you get involved with the charts you use, the better off you will be when you need them.
The changes listed in the above link are all those made since the last edition. They are incorporated online weekly into the latest PDF or POD chart; they just do not appear on older editions. The changes listed are called Critical Changes, which relate to safe navigation. New editions, when offered, will also include the accumulated Non-critical Changes, such as newly surveyed shoreline boundaries in non critical areas, new structures on the land, soundings in non-critical areas, or maybe slight compass rose adjustments, and so on.