Technology has vastly changed the way sailors look at almost every aspect of the cruising lifestyle. Some sailors cringe at the thought of learning about the latest onboard technological advances, while others happily lap up each new product as it hits the shelves of their local chandlery. In reality, most sailors these days fall somewhere in the middle. We want to be able to safely and comfortably cruise our boats while keeping some of the modern conveniences that make life onboard a little easier.

The truly hard part in keeping tabs on the latest and greatest in the sailing tech world is wading through the limitless amount of information to figure out what is right for your boat, crew and the type of sailing you do. From onboard Internet access that allows for quick and accurate weather updates to safety equipment that will help avoid collisions at sea, we have identified just a few products that will aid in your overall enjoyment aboard, as well as some that will ensure your safety during a passage. 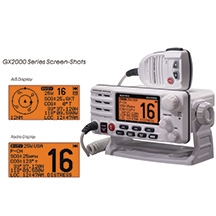 Standard Horizon GX2150
A VHF radio is an essential piece of cruising equipment. Whether you are hailing a bridge on the ICW or the bridge of a large freighter, sailors use VHF radios in numerous situations at sea. Standard Horizon has taken the VHF a few steps further by integrating it with AIS. Their GX2150 is a receiver VHF/AIS that runs off a single antenna. It has a built-in screen that allows you to track targets at varying ranges, giving you their speed, course and closest point of approach. Another benefit in having AIS built into the radio is that it allows you to call a target with the push of a button, putting you in direct contact to warn them of your position. The GX2150 can also be connected to your chartplotter, allowing you to locate and track targets directly on screen. Standard Horizon also sells a handheld RAM mic that can be mounted in the cockpit. It has its own small screen, which shows you the same information as the GX2150. ($399.99/westmarine.com) 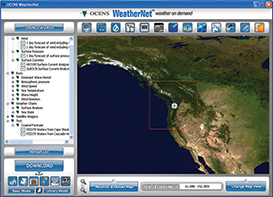 OCENS WeatherNet3
If you are looking for accurate, easy-to-use weather data while cruising, look no further than WeatherNet3 by OCENS. WeatherNet3 is a comprehensive weather data tool that gives you access to GRIB weather and ocean data, classic weather charts, buoy information, radar and satellite imagery, tidal, ice and current data, and much more. This wide-ranging collection of information allows you to make real time decisions based on any number of variables you chose to pull from. And that is one of the best parts of WeatherNet3—by using the tool’s Content Wizard, you are able to customize the information you get, which eliminates the need to hunt and peck to piece together everything you are in search of. Once you have chosen the info you want in Content Wizard, you can download the files to your computer through a wireless connection or by plugging into a satellite phone. WeatherNet3 is now available for Mac users and OCENS has a host of other products ranging from sat phones to software. (Visit ocens.com for pricing.) 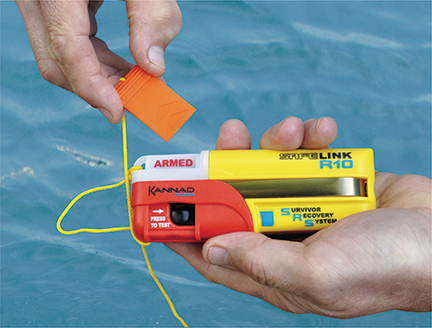 KANNAD SafeLink R10
Losing a crewmember overboard is a legitimate fear for any oceangoing sailor, and in the unfortunate event that someone does go into the sea, getting the boat back to the person in the water is of critical importance. Kannad has made overboard recovery easier than ever with their Safelink R10 Personal AIS Survivor Recovery System. The Safelink R10 is a small personal beacon that attaches to your PFD and transmits back to your ship’s AIS receiver when it is activated. Not only is the Safelink AIS capable, but it also has a built-in GPS that tracks your position as time passes. That way, if you lose a crewmember overboard in any amount of current, the Safelink will track their every move on the ship’s chartplotter, where you can then place the cursor to get an exact location, range and bearing. Once activated, the Safelink R10 will transmit for a minimum of 24 hours and also has an LED strobe light. This is a serious piece of safety equipment that could prove very useful in an emergency situation. (Visit kannadmarine.com for pricing and dealers.) 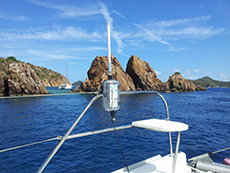 NautiCloud
I’m pretty sure boat owners would spend more time aboard their boats if they had a reliable and fast Wi-Fi connection. That is exactly what the makers of NautiCloud envisioned when setting out to develop a Wi-Fi booster that would work onboard. What they came up with is basically an onboard hotspot contained in a pelican case that can be mounted to the boat’s rail and plugged into a 12v outlet. The NautiCloud searches out other hotspots, links up with the strongest one, and extends Wi-Fi access up to 25x further than a phone or tablet. Another nice feature is that you don’t have to plug it in via a USB cord; once the NautiCloud is plugged into power, you are good to go. ($649/ store.nauticloud.com) 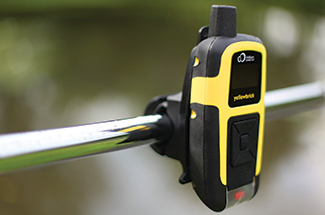 Yellowbrick 3
If worldwide tracking capability is what you’re after, the Yellowbrick 3 may be the answer. Yellowbrick takes GPS fixes and transmits them over an Iridium satellite network to a web-based viewer that can be followed by your family and friends. You can choose to have it take one fix a day or it can continuously update your position. The Yellowbrick 3 can deliver 2,000 fixes on one battery charge—that’s over 80 days of transmitting one fix per hour. I followed friends on Yellowbrick as they won the Vic Maui race this year and they said it was just as easy for them to use onboard as it was for me to follow along at home. (Visit yellowbrick-tracking.com for pricing.) 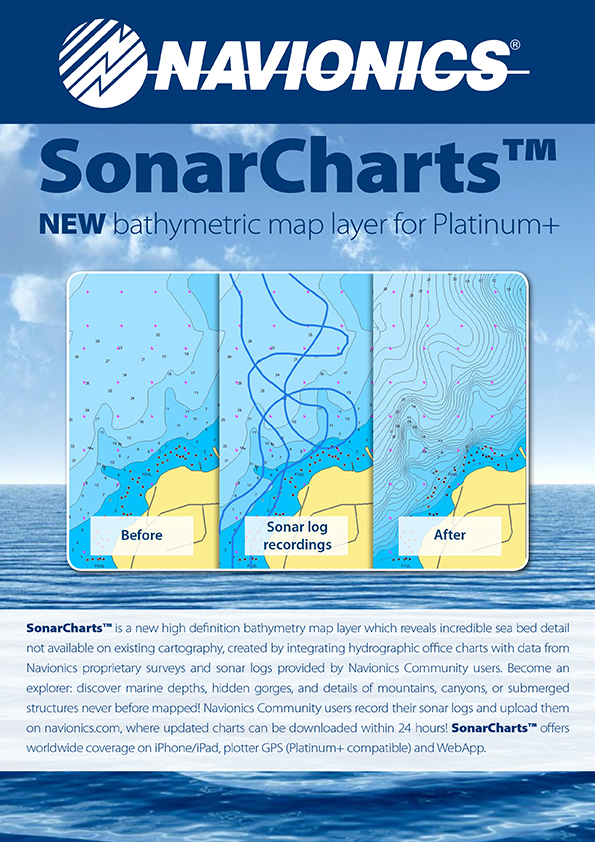 Navionics SonarCharts
Depth soundings have long been a reliable tool for the prudent navigator, and they just got a lot better looking with Navionics’ new SonarCharts. SonarCharts are a high-definition layer for iPhones, iPads, charplotters and web apps that show the seabed in extreme detail. Navionics has integrated hydrographic charts with data from their own surveys and user-provided sonar logs to create a mapping system that shows the viewer every marine depth, hidden gorge, underwater mountain or submerged structure in incredible detail. I could see this used as an aid to navigation when operating in areas where shoals or reefs pose a problem or for the serious diver looking for their next big find. (SonarCharts that support Platinum+ cartography are currently in beta testing and free to existing Freshest Data customers. SonarCharts for the Apple iPhone and iPad are priced at $4.99 and $9.99 respectively, and will be available later this year to existing app users.)

GOPRO Hero3: Silver Edition
Sailors have been recording their adventures for decades and the new GOPRO Hero 3: Silver Edition makes shooting cruising footage even easier. With an ever-increasing need to share our experiences with family and friends, the Hero 3’s professional quality and numerous mounting systems will allow you to capture your favorite cruising moments.  The Hero 3 is smaller and lighter than its predecessor the Hero 2, is Wi-Fi enabled, and comes with a free downloadable app that allows you to preview and playback footage using your smartphone or tablet. The camera comes with rugged waterproof housing, rechargeable battery, USB cable and mounting hardware. ($299.99/gopro.com) 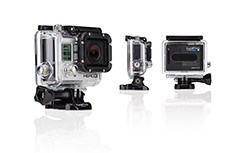 FUSION 700 Series
Whether it’s while enjoying a sundowner at anchor or beating to windward, every sailor likes to listen to some good tunes now and again. I was fortunate enough to get a tutorial on FUSION’s new 700 series marine grade stereo that seemed to do everything onboard besides trim a sail. The unit conceals an iPod inside its waterproof body, is Sirius Satellite ready, includes an AM/FM and VHF tuner, and can be synced with your boat’s navigation system using its FUSION-Link system. This allows you to control the stereo from a chartplotter while you’re sailing. Plus, the unit itself acts as a repeater, giving you information like speed, depth and course. Another unique feature is the user’s ability to break the vessel into several distinct listening zones that can be controlled independently. If entertainment and ease of use are what you’re after, this might be the ideal system for you. ($499.99/fusionelectronics.com)

Andrew Cross is a USCG licensed captain and US Sailing certified sailing and navigation instructor. After putting thousands of miles under his keel on the East Coast and in the Caribbean, he and his wife Jill now reside in Seattle on their Grand Soleil 39, Yahtzee. Catch more of Andrew’s expertise in each week’s edition of www.cruisingcompass.com.