It was time to move on. The major and violent front had passed at 4 p.m., and my wife Vicki and I were ready to leave in its wake. We had been weather bound in Sturgeon Bay on Wisconsin’s beautiful Door Peninsula for far too many days. The various forecasts indicated now would be a favorable time to cross Lake Michigan, with diminishing winds and waves.

My main weather worry was a slightly smaller squall line behind the first, which I could clearly see on the handy radar app on my iPhone. It could spell trouble. However, it appeared the second system was likely to split in two, and pass to the north and south of our intended track towards Sleeping Bear Point and the Manitou Passage, about 55 nautical miles to the east.

So, our immediate intention was to stick our noses out into the open lake to see if the conditions were manageable. If they weren’t, we would, of course, turn back to the Harbor Club Marina to wait for a better weather window. Lake Michigan—as all of the Great Lakes—is never to be taken lightly in adverse weather.

After passing through Sturgeon Bay’s three busy bascule bridges, we raised our main and staysail in the sheltered ship channel. When we came out of the narrow waterway, the wind was out of the southwest, and the open lake had eight-foot ocean-like seas with a decent, longer interval.

We could handle that. Without the extreme short-and-steep wave train, for which the Great Lakes are rightly infamous, going downwind in longer eight-footers is manageable for our boat, Freelance. It’s a classic 1981 Pearson 36 cutter, which is classified as a moderate ocean cruiser. Soon, we were on a course towards the eastern shore of Lake Michigan. Our plan was to eventually pass through the Manitou Passage, go north to Grays Reef Passage, and then turn east towards the Straits of Mackinac.

The apparent wind was about 10 to 15 knots. We had a long way to go, and with a forecast for weakening winds and waves, we elected to motorsail to make it a faster passage. Our progress towards our eastern waypoint was good, often exceeding a speed of seven knots, and occasionally surfing the larger waves a bit. Freelance’s motion was very reasonable, especially given it wasn’t as natural as under sail alone. But its motion certainly was at a level where we didn’t want to use the propane stove to make a hot meal for our dinner. We would have to make do with our usual heavy weather sandwiches and snacks.

The below-decks autopilot was holding the course well, but I choose to hand steer as much as possible, just for fun. Vicki and I took turns doing deck watches and sleeping in the cabin. One of the valuable lessons I learned a long time ago when I served in the Danish Air Force is that you should always rest when you can, otherwise, being overly tired can lead to major mistakes.

The Weather Service’s predictions were that the seas would gradually smooth out, but they remained pretty much in the same eight-foot range all the way across the lake. However, as I expected, the secondary front did split in two. There were heavy thunderstorms passing to the north and south of us, with us sailing in the large gap between them. The flaming sunset, which was visible between the two weather systems, was outright gorgeous.

At dusk, we neared the Michigan side of the lake, and could gradually make out the lights at Point Betsie and Frankfort. This was where the Weather Service—which is never in doubt, but often wrong—had predicted that the seas and winds would settle down. Any change was barely perceptible.

It was pitch black, but the stars were shining bright, when we made our final approach to the Manitou Passage. Vicki was beginning to feel the motion of the boat. She did not have a horizon to keep her well oriented.

“Look at the stars. There is Cassiopeia,” I suggested, pointing to the constellation. It didn’t do it for her.

The wind began shifting around, and then disappeared. The waves became confused. It was impossible to keep the sails filled on our northeastern course through the passage. So, I turned on Freelance’s deck lights, clipped my tether on the starboard jackline and went forward to take down the sails while Vicki handled the boat. The sails came down quickly and smoothly, but Vicki was becoming increasingly nauseated. Until the wind died, the force on the sails had stabilized the boat, and without them, we were being uncomfortably tossed around by the seas.

“Which side should I throw up over?” Vicki calmly asked. We had our lee cloths up on both sides of the cockpit, and one would have to be removed.

“Just do in the cockpit. It’ll be safer,” I replied. We were, after all, in pitch darkness, and rolling severely. Besides, the cockpit is easy to rinse out.

We were making an advance of about five knots under power. The motion became even worse in the gap between South Manitou and North Manitou Island when the wind returned. We now had 15 to 20 knots of breeze and five-foot swells, which came in from the northwest. It was definitely not what we had expected or hoped.

It took us two hours to get through the Manitou Passage. When we emerged, the wind increased and shifted right on the nose. That obviously was a serious impediment if we wanted to keep going north towards Grays Reef.  So, remembering the immortal words of Nancy Reagan (“just say no”), we altered course towards the lights of Leland, directly to the east. All along it had been one of our possible bailout ports in case it should become necessary. It is always good to plan for contingencies.

Now, I will never go into an unfamiliar port in darkness and heavy seas.  Fortunately, though, we had just visited Leland two weeks before, so I knew the approach well. Its narrow harbor entrance was recently dredged to 13 feet and opened to the south. It would be well sheltered and deep enough to handle our boat’s 5.6-foot draft.

Until we arrived at our destination an hour later, we rolled heavily in beam seas. They didn’t bother me, but they were hard on Vicki. Due to the darkness, it was difficult to estimate the wave height, but they were probably in the four or five-foot range, though they could have been higher.

Radar and GPS are certainly nice to have, but at the harbor entrance we used our handheld searchlight to verify that the breakwaters were where we expected them to be. It was still blowing hard and was very dark, but the waters inside the channel were calm.

The time was now 4 a.m. We carefully entered the harbor basin and looked for a place to tie up. Usually when coming into a harbor after hours I head to the fuel dock, but a larger Beneteau named Miss Higgins already occupied that spot. So, we slowly went through the basin to see if there happened to be any vacant spaces. There wasn’t, and there really wasn’t a suitable place to drop our anchor either.

We turned back to the fuel dock, and illuminated Miss Higgins with our searchlight, while loudly hailing it at the same time. A crewmember that had been sleeping in the cockpit popped his head up and said: “just a moment. I’ll get the captain.”  I spun Freelance in a few tight circles in the basin while Miss Higgins’ crew of five came on deck.

“Can we please raft up to you,” I politely asked. “We’re coming in from Sturgeon Bay.” Leland is designated as a harbor of refuge, and it is common for boats to be rafted up in this critical port.

The skipper quickly and kindly agreed, and we soon had lines and fenders ready on both boats. We made the usual slow, gliding approach—carefully watching that we would not foul the spreaders—and the two boats were soon rafted together.  We thanked the crew of Miss Higgins, and chatted a bit before we all turned in for the rest of the night. 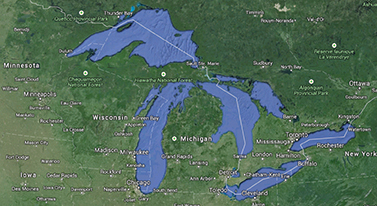 It had been a 12-hour crossing from Surgeon Bay, and although we didn’t keep going towards the Straits of Mackinac that particular night, we had made nearly 70 miles of progress towards our homeport in Lake Superior’s Apostle Islands. All in all Freelance handled the conditions very well, but it would obviously have been a much more pleasant passage if the weather had been as foretold.  As it was, our cross-lake passage became a bit more on the adventurous side—and Vicki and I are sure some of the sailors at Leland thought we were nuts to have attempted the trip.

Niels R. Jensen is originally from Copenhagen, Denmark. He is the Commodore of the Great Lakes Cruising Club, and usually sails his Pearson 36 cutter on Lake Superior. A journalist by trade, Jensen writes for the international boating press and is a regular speaker at boat shows. He holds a USCG Master’s license.