Daylight lengthens, and rumor has it that the weather is getting warmer further to the north. It’s time to leave the tropics in favor of northern summers  (published May 2017)

Aquamarine water and pastel sunrises, warm breezes amidst softly swaying palm trees and the sound of tree frogs chirping: it all brings the tropics to mind. Whether you have spent the winter there or just arrived by plane, May is the time to start moving boats back to the north. Getting back north may not be quite as straightforward as getting down south was in the fall, however. One size does not fit all.

Winter weather patterns are often still in effect with the summer jet stream pattern not completely sorting itself out until mid-or late June. The shoulder season can be particularly treacherous as the jet stream and associated surface low pressure systems track erratically, more northerly with one system and further to the south with the next. Fall departures from the north can often be cold and breezy, but the worst situations can often be avoided by merely waiting for a better weather pattern to develop. Once further south, the weather will often improve with the anticipation of a warm and sunny arrival adding to the crew’s mounting enthusiasm. Heading north from the tropics in the spring will almost certainly include a pleasant, warm departure, but it can often provide a cold, stormy arrival compounded by strong headwinds. It’s best to be prepared at departure rather than be seduced by the pleasant conditions at the outset. Both boat and crew should be ready to deal with adversity regardless of when that might occur. The worst conditions could very easily be at the end of your passage north. In the North Atlantic winds can be a grab bag with wind speeds and directions almost anything imaginable while in the North Pacific along the North American coast, delivery crews will no doubt have their tacking skills tested unless they decide to leave Mexico and arrive in San Francisco via Hawaii. In any case, they will want to watch the weather as they go up the coast, passing valleys that disgorge inland winds seaward and ultimately approach Point Conception further to the north. 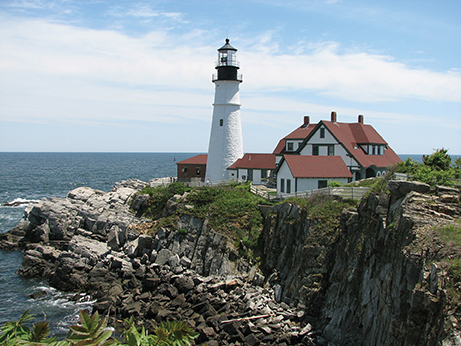 Getting to the Caribbean from New England in the fall can have its own set of rigors and idiosyncrasies, of course, but the arrival of the trade winds in the fall at least provides some degree of consistency. Routing boats to the north in the spring will often require a myriad of solutions based on destination and the actual weather conditions that prevail prior to arrival.

Boats heading from Florida to New England will have a sleigh ride in the Gulf Stream if they depart on wind directions out of the East, South or West, but they should beware departing with a northerly headwind, bucking into the seas and strong current of the northward flowing Gulf Stream. If their final destination is to be Newport, RI or ports in Maine, they may opt to remain in the Stream as it flows northeasterly beyond Cape Hatteras, but that decision will best be made dependent upon the forecast wind direction at the time. If the wind goes to the northeast, they will want to bail out of the Stream, heading north and hopefully getting lifted to their destination. Getting the weather routing right can be an art form, making the trip a joy to remember. Get it wrong, and the trip can provide memories of a different sort.

Boats departing from further to the south in the Caribbean and heading to the Carolinas or Chesapeake Bay can have different options along the way, although they may face similar situations further to the north and closer to their destinations. If they face the unusual circumstances of northerlies early in their trip from the islands, they may elect to head west and go up the Old Bahama Channel, assuming that the northerlies are expected to shift to a more easterly direction prior to getting to the Channel. One doesn’t want to be heading north in the Old Bahamas Channel with northerlies blowing, and, even worse, one doesn’t want to be caught attempting to get north, past Miami and Ft. Lauderdale in northerly winds. Tacking in the Old Bahama Channel would be frequent and inefficient, and the sea state in the Gulf Stream off Florida wouldn’t be pleasant in northerly winds, to say the very least. A better route might be to try to get north to “Hole in the Wall” at the entrance to the Northeast Providence Channel and make your way through the Bahamas and the Northwest Providence Channel. If winds are holding out of the north or northeast, one could always delay in the Bahamas, waiting for a suitable weather window to get into the Stream and continue north. Once into or across the Gulf Stream north of West Palm Beach, Florida there are plenty of places to hold up and wait out recurring northerly winds if that becomes necessary. Jacksonville, Savannah, and Charleston to name but a few as crews make their way to the Carolinas or Chesapeake Bay.

Boats heading to New England from the Caribbean have a completely different set of options, but getting back home to the north in the spring is still quite a bit different than it was heading south to the islands in the fall. Ideally, heading south in the fall, boats would have passed about 50 miles to the east of Bermuda at Bermuda’s latitude in order to set themselves up for the expected trade winds to the south. Heading north towards Newport, RI in the spring, as an example, boats would be well advised to protect against the possibility of northwesterly winds on their final approach. In that case, heading to a point about 200 miles to the west of Bermuda at Bermuda’s latitude on the northbound trip would give crews the option of heading straight north and still fetch the opening to Narragansett Bay without a great deal of tacking. If, as the crew approaches Bermuda’s latitude, they have reliable weather forecasts that imply a southwesterly prevailing wind, they can cut that corner and head straight for Narragansett Bay or their final destination. Setting up early in the passage for a worst case scenario means that one is prepared. If that scenario doesn’t look like it will develop, a more efficient and direct route can be employed. 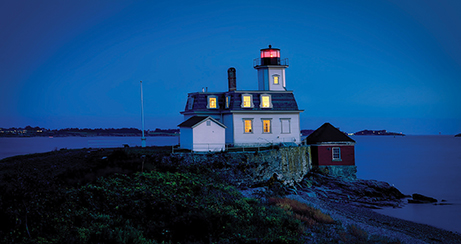 If forecasts imply that heavy weather is going to be present for the last few days of a passage to New England, boats often elect to stop in Bermuda to wait out the weather. On the trip back north, ideally they would probably prefer to stay a bit further to the west at that latitude, but Bermuda is an option. It’s a decision that only the skipper and crew can make based upon their own particular assets and liabilities. The experience level of the crew, the condition of the boat and sails and the degree to which the weather is going to develop, all factor into the decision. The overall schedule should not. Serious accidents often happen because someone is in a hurry to get home, get back to work, or other outside factor. Safety first is a healthy perspective.

Gulf Stream crossings can be serious affairs, especially during the shoulder seasons of spring and fall. Wind against current will raise square, breaking waves, and if you’re on the wind in those conditions, the shock loading on the rig and other equipment on the boat can be quite severe. It’s better to sail conservatively with runners, inner and baby forestays in place than risk a rig failure. Knowing the weather and expected location and direction of the Gulf Stream will go a long way towards making the passage safe and pleasant.

Of course, getting north from Mexico in the North Pacific can be similarly daunting even without the presence of the Gulf Stream. I’ve had the pleasure of doing some of those deliveries myself, and subsequently thought that the owners of the boat must have called me because they thought that guys on the East Coast wouldn’t be aware of how bad it can be to tack up the Mexican coast. Decisions need to be made about whether you will hug the Mexican coast or head further offshore. Usually, people stay in, but still there will be inland winds funneling down valleys and pouring seaward to contend with, and the headwinds and tacking can be relentless. For boats heading north past Southern California, there is also Point Conception to deal with, and winds there will often exceed expectations as it funnels and accelerates around that corner of the mainland. Knowing the weather and understanding the micro-climates will help to prepare for the conditions and avoid problems.

With the tropics a fading memory, the rigors of the northbound delivery can reawaken your senses. Those few days of cold water and brisk nights can provide an exhilaration all their own. Preparation and awareness will make those memories to savor, and the summer ahead will be at least as pleasant as the winter was in the tropics. Enjoy it all.