Preparations for the Bermuda Race are about to commence, but getting ready for an offshore passage isn’t unfamiliar territory despite the myriad possibilities that lurk in the future  (published June 2016)

I just made my flight reservations. Moondance, the Swan 56 we brought to Spain last June is now in St. Martin and needs to be brought home to New England in preparation for the upcoming Bermuda Race this June. Michael Johnson, Moondance‘s owner, Tom Carrol, Dana Bolton and I will deliver the boat to the Jamestown Boat Yard (JBY) in late April. Most of the crew have already taken their Safety at Sea Seminars and the boat and crew were thoroughly prepared for the transatlantic last year despite the fact that it was the first transat for most of those aboard.

Moondance will again be re-inspected and fawned over prior to our departure from St. Martin in a couple of weeks, but that trip north will provide us with ample opportunity to refine the JBY worklist, prepare for the official Bermuda Race inspection and generally reacquaint ourselves with the boat prior to pushing her harder in race conditions. Being over-prepared is a concept that it totally beyond my comprehension.

In fact, it really doesn’t matter whether you’re preparing for a mid-winter passage up the East Coast of the U.S., a Newport to Bermuda Race, Pacific Cup or just a long cruise, getting your preparation wrong or inadequate can add to the risk and almost certainly will diminish the enjoyment of the trip. Happily enough, and unlike most of the deliveries that I make, most people have more than a couple of days to prepare for a passage.  Regardless of the amount of time necessary, though, the bare bones of preparation remain much the same for everyone.

STARTING PREPARATIONS
Despite the fact that I’ll again be loading up my backpack and lugging my sea bag through airports and parking lots, Charles Nethersole is already onboard making sure that Moondance is ready for sea, and my own mind will be working out the offshore details.  At least this time I have the luxury of knowing some of what we’ll be in for when we arrive in St. Martin. 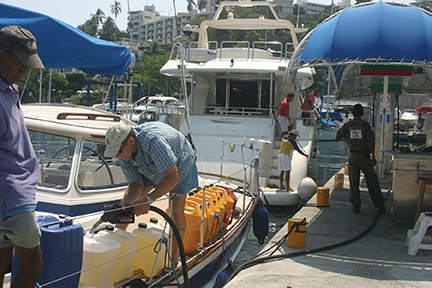 Regardless of that fact, however, my first task will be to survey the actual onboard situation and confer with Charles and Michael.While I poke around in the nav station, locating ship’s papers, charts, and tools and trying out the Iridium phone, computer and various other instruments, I’ll ask the usual questions. “What does it look like for fuel and water?” “Have you been able to check all of the through hulls?” “What have we got onboard for sleeping bags?” The questions will begin to roll off my tongue as fast as they can be answered. “How well is the dinghy secured?” “What’s the situation with the tools that we have? How about the sail repair kit we had onboard last summer?” More questions will follow as I get into full-on data collection mode and I refer to my generic pre-departure check lists.

THE BENEFIT OF LISTS
After the initial overview, we will complete an accurate list of everything we need to purchase.  Simultaneously, we will create a list of things that need to be done on the boat prior to departure. We will break down into two teams of two or three people each, one team to do the shopping and the other team to remain onboard for the day, preparing the boat for departure. If the preparation team thinks that they will need a few things to complete a particular task such as particular tools, we will add that to the list of things to purchase prior to going on the “shopping spree”.

Generally speaking, I tend to break tasks down into various departments: nav area, sails, deck hardware, mechanical, provisioning, safety and so on. I have a rather generic list of tasks that should be addressed prior to departure, and a pretty complete list of tools that I would want for long passages. Neither list is totally complete. But they provide a good start in the thought process. Some things on the lists apply to a particular boat or passage, and some things don’t apply.  Together, they provide a good starting point from which to build an accurate list that will help us get a boat from Point A to Point B, anywhere on the planet. For short races, we may want a minimalist approach to spares and tools, but on long passages and races, we will want to have a more comprehensive bag of tricks from which we can solve a wide variety of potential problems.

Once offshore, we know there aren’t any malls, chandleries, sail lofts or machine shops.  We’re it. And we’ll have to make do with whatever we have with us or learn to do without it. We’ll have to fix it or forget using it once something is broken. And things do break. Spinnakers blow out. Racor filters need to be replaced. Hose connections leak. Winches start to rattle. Lines chafe. You will try your best to take care of most of those things prior to departure. You’ll check lines while underway. You’ll take care to reef early and downshift your headsails conservatively. But problems will occur anyway.  And the thoroughness of your preparations will determine how successful you are in overcoming those problems. 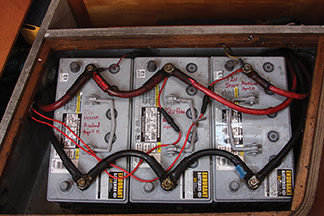 When the shopping team returns with the purchases, the items will be stowed and updates provided by both teams. If the onboard preparation team needs more time or equipment to complete necessary tasks, the shopping team can pitch in or fetch the necessary equipment. When we’re ready to leave, the final remaining tasks will be to top off the fuel and water tanks. We will leave the marina dock, head to the fuel dock and finally head offshore. If one of the water tanks has a leak in the top, the previously purchased and stowed quick setting epoxy can be used to take that off the list of tasks. When we fuel up the main tanks, we will also fill up four five-gallon jerry cans and one of the two two-gallon jugs that we previously purchased.  We will keep one of the two-gallon jugs empty to use for waste oil if we need to change oil while underway. And we will use the two gallons of diesel fuel for things like topping off Racor filters, coating gaskets or other small tasks if necessary and avoid using a large five-gallon jug while bouncing around in an engine compartment. Prior and in addition to topping off our tanks, we will all take a ride to the local West Marine or other chandlery to see if there is anything that any of us thought necessary to bring.  I want everyone’s mind engaged in this process so we don’t leave anything critical behind merely because it hadn’t occurred to one of us.

TEST SAIL
If we have the luxury of time with an unfamiliar boat, and as part of our preparations for the Bermuda Race, we will take the boat out for extensive testing weeks prior to the final preparations, seeing what might need readjusting or additional attention.  Sea trials are a valuable learning tool, and it’s better to discover your weaknesses during trials than to discover them 500 miles from shore. Onboard Moondance, we’re fortunate that we will be doing our pre-race sea trials during our delivery up from St. Martin. We will have a couple of full crew sea trials in May and June to look for additional tasks and to help the rest of the crew become reacquainted with the vessel.  We were all onboard last June, but that doesn’t mean that a little “refresher course” isn’t beneficial this year.

Our preparations for this next trip will be exceptionally quick and efficient, thanks in large measure to the efforts that Charles is currently undertaking.  Having someone familiar with the boat and on site prior to the rest of the crew’s arrival will be a critical element in the process this time.  Engines will have been run, oil changed, and things carefully surveyed even prior to most of us getting to St. Martin.  Diligence and focus by everyone involved will ultimately make it all possible through the Bermuda Race and Moondance’s eventual return home.

Few passages are completely problem-free, but hopefully the ending back in New England will be with the boat in better shape than prior to our arrival in St. Martin.  If we’re able to accomplish that goal, it will be because of preparation and the efforts that the crew put forth throughout the campaign.

TO DO LIST
Throughout the preparations we have broken the process down to a number of relatively simple steps: 1) assessment of current situation of the boat, 2) organizing what needed to be purchased and accomplished into lists, 3) purchasing and finishing the necessary tasks by the assigned teams, 4) re-evaluating the situation with everyone’s input 5) reacquainting the full crew with the boat.  We will test things while heading out from St. Martin, and hopefully, we will renew our familiarity with Moondance while making her a safer, more efficient vessel.