About six months before leaving for full time cruising, we decided to spend some time practicing with our spinnaker. We had almost two years of sailing on what should have been our full suit of sails, most of which were then brand new: main, mizzen, 135 percent genoa, Code Zero, storm jib, storm trysail and spare Yankee foresail. We just had not had much opportunity to work with the spinnaker. It was a beautiful rainbow symmetrical in very good condition which had to be flown with a pole. Racers clearly we are not. We found the “pole dance” to be just a little bit taxing what with rigging all the guys and stays and then changing it all over to gybe the sail.

Upwind we were set with the choice of the jib or Code Zero. We could muster a reasonable boat speed with as little as six or seven knots of true wind at 50 to 70 degrees off the bow with the Code Zero.

Downwind, we could run jib ‘n jigger (jib and mizzen) from 60 to 150 degrees or in lighter winds, wing-on-wing from 150 to 180 degrees with our Forespar extending whisker pole holding the jib out to windward.  We had also rigged a sturdy preventer system for the main with half-inch lines led to the bow through 60-Series Garhauer blocks and back to clutches on the port and starboard toe rails at the cockpit. These could be quickly tied onto lines fastened to through-bolted padeyes at the aft of the main boom and hung on the sides of the boom forward to near the mast where hammock hooks held them with a loop of bungee cord through the eye splice of the line.

But downwind in light winds, say 10 knots or less, we just could not get going fast enough to matter. We anticipated plenty of light downwind sailing in the Pacific so we knew we needed a solution. The symmetrical spinnaker and its pole was just too much work.  We started researching asymmetrical spinnakers, furling spinnakers, and other “cruising” solutions.  Then suddenly the Parasailor appeared in our web searches. 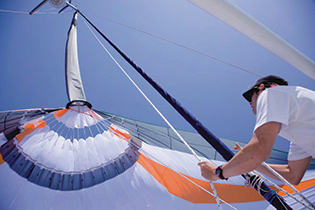 PARASAILOR
The Parasailor is a symmetrical spinnaker that is deployed from a snuffer but with one unique feature— a wing that flies horizontally in front of the sail. This wing looks just like the high performance parachutes you might see ridden into football game halftime shows. To provide the wind to inflate this wing, the sail has a window cut all the way across it about two thirds of the way between the foot and head of the sail.  The wing and the window create all the magic.

When flying a spinnaker, one of the common problems is planting the bow of the boat.  On the Parasailor, the wing provides lift which actually pulls the bow up. The wing also serves as a structural beam to support the sail and hold it open.  If the winds die for a moment, the sail does not collapse as quickly as a normal spinnaker.  And when the sail “pops” back open, it does so gently with little risk of blowing out the sail. The window in the sail acts like a safety valve, allowing air to pass through the sail when it is overpowered.  It is said that the sail can withstand 25 knot winds because of this.  (Try that with a normal spinnaker).

The Parasailor is also most commonly flown without a pole, using a sheet and guy to each of the lower corners of the sail. The guys run through blocks at the bow, typically on the tip of the anchor roller, and back to the cockpit, either on the boat’s centerline or along the stanchions.

GET READY, GET SET
Before purchasing this sail, Jill and I traveled across Florida to Tampa for a few hours of training on the sail (included in the purchase price), with Martin Town who is the North American distributor of this German-made sail.  (You can see a video of one of these training sessions on YouTube. Search for “Parasailor University”).  The training is, as one might expect, as much about launching and recovering the sail as it is about sailing with it.

First we learned about the Easy-Snuffer™ (aka “sock”) that comes with the sail. It has several features that the sock of our prior spinnaker lacked.  First, there is a Velcro opening at the top of the snuffer to allow one to access the connector between the sail and the top of the snuffer. The normal connector is a large stainless link.  We upgraded ours to a large soft shackle to avoid any possible wear.  At the base of the snuffer is a very large fiberglass boot or funnel. On either side of this are pockets which hold snap clips to secure the port and starboard cringles at the foot of the sail.  This keeps the sock from rising on its own while you are setting up the sail and before you are ready to deploy it. Lastly, the sock has red and green stripes on it to correspond with the sides of the sail—there is after all a front and a back to this sail—the wing must be in the front, so keeping track of the port and starboard sides of the sail is very important, but easy with these stripes to reference. The sides of the sail also have these colored stripes with the foot having a white stripe.

On each side of the sail, the guy and sheet are both joined to a single snap shackle with a large bale that provides enough room for the two eye splices.  We set ours up with red and green sheets and black guys. The sheets run through the same blocks we use for the Code Zero, mounted in the aft corners of the boat, and back to our spinnaker winches. We cleat off the jib sheets and use the jib winches for the guys.

After the sock is hauled with a spinnaker halyard, in front of all other sails, the guy can be pre-set for the anticipated tack.  After unclipping the safety clips, and stowing them in the pockets provided in the sock which protect the sail from the clips, I hauled the snuffer line on the foredeck while Jill hauled a bit on the leeward sheet to help open the foot of the sail—then whoosh!—the sail deployed and the snuffer all but disappeared aloft.

Dowsing the sail is just a matter of hauling the snuffing line down while the sheet is eased a bit.  The whole rig fits into a custom bag which has six compression straps which make the bag considerably smaller and easier to store than our prior spinnaker.  It even just fits down our forward hatch and into the V-berth. 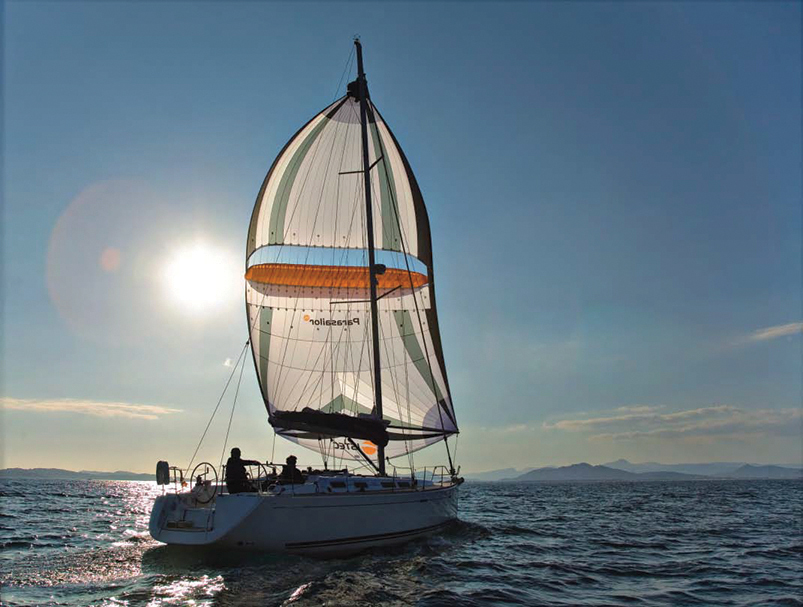 TEST SAIL
There were fairly light winds on the Tampa Bay that Saturday morning but we managed to try the sail on a few points of sail. It easily takes over from our Code Zero as it can be sailed from 70 degrees to 180 degrees.  With the wind on the beam, the active guy can be better replaced with a collar strap around the jib which keeps the tack of the sail right at the jib with the guy providing the vertical control of the tack while a Barber hauler can be used to bring the sheet down and in. What’s more, once on a run the sail can be easily gybed around the bow by simply letting out on both sheets a bit, letting off the active guy and hauling the lazy guy. No more pole dancing for us! We were sold and took the sail home with us.

Months and months passed before we had a chance to use the sail on our boat.  As we entered the Bahamas, we had more wind most days than we needed—reefed mains and jibs or jib ‘n jigger was the daily rigor. Finally, a day with light winds aft of the beam availed itself.  We had a run from Black Point to Lee Stocking with only 10 knots from the north forecast.  That day we never saw much more than 10 knots of true wind and our apparent angle was 150 to 160 degrees.  Having taken the Code Zero down the evening before at anchor, it took about 30 minutes to rig for the sail, running the sheets and guys and preparing the snuffer to be raised while underway. Once the Parasailor was up, we killed the engine and enjoyed five to seven knots of through the water boat speed with an apparent wind of about the same speed and at times, amazing us, even lower than the boat speed. The rest of the “fleet” motored that day on the same leg.

While the Parasailor is the most expensive sail on our boat and takes an additional investment for the necessary rigging (sheets, guys, blocks, shackles, splicing, Barber hauler, jib collar), and it may not be the sail seen most often flying on our boat, since it is so easy to deploy and retrieve and offers the safety of being able to handle unexpected increase in wind speed, we know we will get it out anytime we have light and moderate winds and plan to move downwind and we expect it will be the sail that makes for a great Pacific crossing.

Over the last several years we have watched Pete and Jill Dubler’s restoration and refit of their Pearson 424.  They now cruise aboard S/V Regina Oceani.