When I tell the story of a recent storm encounter, most experienced sailors wonder how we got caught in the first place. Didn’t we listen to the forecasts before leaving and have NOAA weather reports on board? Couldn’t we get information from sea buoys? Didn’t we have Garmin weather satellite? The answer to each of those questions was yes—we had all of that and more.

My Pacific Seacraft 37, Cool Breez’n, had a crew of three: Alex, my 17-year-old son; Bryan, a good friend and experienced sailor; and me. Before leaving Port Angeles, Washington, NOAA reported an intense low-pressure cell in the Gulf of Alaska heading south at 26 knots. It was packing a real punch, with seas of 30 feet and winds in excess of 50 miles per hour. I put this information somewhere in the recesses of my head; I didn’t think we had to worry about a storm a thousand miles away. Besides, we had a schedule to keep. I’ve since learned that a schedule is the most dangerous thing you can have on a boat.

We fueled up at Grays Harbor on Tuesday. When we crossed the bar on our way out to sea, the swells were picking up. The wind was out of the northwest at 10 to 20 knots and we sailed “full-and-by” (main sail and genoa full and sailing with the wind off our starboard aft quarter) for the next 24 hours. Wednesday’s log shows our watch schedule, position and sea conditions. We were keeping four-hour watches during the day and three-hour watches at night from 9pm to 6am.

We turned on the engine to charge the batteries for a few hours. We were making good time and I was thinking about heaving-to to give the crew a few hours of extra rest, but decided to continue on. Periodically, we checked the sea conditions ahead of us. Sea buoys reported favorable winds and seas as far south as San Francisco. I never queried the sea buoys to the north to see what was behind us. If I did I might have freaked out.

The only entry in my log for Thursday is a questionable lat-long position. I entered “N 40 23.2, W 125 15.0.” It was probably N43 23. We were about 50nm offshore of Coos Bay, Oregon. Sometime in the early hours of Thursday the storm caught us and entries in the logbook went to hell—we had our hands full managing the boat.

On Thursday morning we rolled up the last bit of the genoa and set the staysail. Alex and Bryan went forward to deploy the staysail while I steered. It was dangerous work and they were both tethered into the jacklines. While they worked my attention was drawn to a deep trough that was opening up to starboard—it must have been 20 feet deep! As I steered to avoid slipping down, I was amazed to see a whale as big and wide as our boat surface in the bottom of the trough. It took one deep breath and disappeared into the dark water. The crew came back to the cockpit and I told them about the whale they missed. Bryan told us that while he was on the foredeck he saw two porpoises jet out of the vertical face of a wave and dive down the abyss into the trough 15 feet below. They were playing “Top Gun” in the storm; if a control tower had been in the area, they would have buzzed it.

After the excitement, we settled back into our watches. The mainsail had already been reefed as far as possible. We were sailing with the wind, doubling hull speed when we surfed up the face of the waves. During Alex’s watch we hit 16 knots surfing one wave. The wind was blowing a consistent 40 knots out of the NNW. The barometer had been falling for the past day and showed no signs of hitting bottom. We changed our watch schedule to three hours on day and night, but as the weather conditions deteriorated, Bryan suggested we set watches to one hour on with two crewmembers on watch at a time and only one hour off. 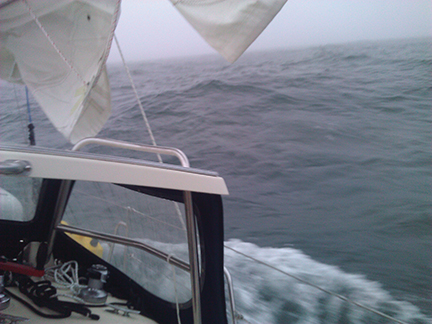 We doused the mainsail and continued sailing with only the staysail.  Steering took so much concentration that we couldn’t keep it up for more than an hour at a time. When we got off course, the staysail flogged so violently that we thought the stay would be ripped right out of the deck. Late at night when we had only the illuminated compass dial to watch, it mesmerized us. Despite the noise, breaking waves sending cold water into the cockpit, and banging motion of the boat, we were able to fall asleep. At one point I was so tired I told Bryan that I didn’t think I would be able to stay awake during my watch. He and Alex both took an hour of my watch so I could get some sleep. I don’t remember actually falling asleep, but the two hours of rest set me up for my next watch. I returned the favor by taking Alex’s watch earlier so he could get some rest, and I let Bryan sleep later, too. I’m pleased to say that crew cooperation and morale never fell with the barometric pressure.

We had been taking the odd wave into the cockpit by now, and more than six times the cockpit filled up with sea water. The crew on watch was clipped into two tethers to hold them steady, and no one had any dry clothing left. Thursday evening I put on my last dry shirt and socks and went on watch. My foulies were zipped up to my eyeballs and cinched at the sleeves to keep the water out, but an errant wave blasted over the rail and sent gallons of water into my face and down through my hood into my jacket. I was literally soaked from head to toe.

HINDSIGHT
Sometime between Wednesday and Thursday, the bronze hanks on the staysail began to break. Bryan called me on deck during his watch to tell me that one hank was gone. I found a stainless steel carabineer and crawled out to the bow to cut off the remains of the old hank and put in its place the carabineer. It seemed to hold.  But later, we lost three more hanks and decided to strike the staysail and motor under bare poles.

The VHF radio periodically broadcast warnings from the Coast Guard about dangerous sea conditions that night. No kidding. Later, we heard a DSC message about a ship that was sending out a distress message. Their position showed they were quite a ways north, a direction we could not go without running head-on into steep seas, so we continued south.

Before dawn on Friday the winds were exceeding 50 knots. The swells were huge, but the breaking waves at the tops of them seemed flatter. The wind must have been leveling them. In these seas, we reached maximum speed when a wave would start to lift us, then at the top of the wave we’d slow down and the wave would pass us. Thankfully we never slid down a wave’s front face.

I began wondering how long our stamina would keep us going. The storm was showing no signs of letting up. We hadn’t eaten much of anything for a day and hadn’t slept a wink, unless you count the seconds of sleep induced by the compass light while on watch. I started to question why I had not heeded the warnings that NOAA had given about the storm in the Gulf of Alaska.

SURVIVAL SAILING 101
Realizing you are in survival sailing mode can be useful—it gives you time to plan your next step before you are faced with a dead engine, a broken hatch or a leaking thru-hull valve. You make a mental note of your strategy to cope with each event before it happens. I knew that Bryan was going through the same mental exercise. He’d been out in these conditions before and his actions gave me great confidence that he was one step ahead of the next situation. I asked Alex if he was concerned about the storm. He said he wasn’t, but he was getting tired and the watches were starting to drag on for too long for him. He was ready for the storm to be over; we all were.

Sometime before dawn on Saturday the barometer hit bottom and remained steady. By dawn it actually began to rise slowly and we noticed that the winds were dropping to 35 knots, then 30 knots. The storm was winding down. But then the barometer began to drop again and the winds grew steadily to 35 knots, then 40 and finally 45 knots. The crew’s mood changed. We zipped up our jackets, tightened our hoods and resumed our grim determination to fight the battle. The storm was not finished with us.

Finally, the barometer began its slow journey up the scale to normal weather. By 10am Saturday, the winds fell below 20 knots and the seas began to subside. We were approximately 100 nm northwest of San Francisco and began thinking about passing under the Golden Gate Bridge. We made something to eat, but I don’t recall what it was. The crew returned to normal watches. The storm had finally run past us.

You learn a great deal about people when you go through a difficult time like this. It tests your mettle and brings out your best and worst qualities. I’m very happy to say that my crew showed a great deal of tenacity, courage and cooperation. I was proud of how my son worked his watches throughout this leg of the voyage. When Bryan left the boat in San Francisco to return to Seattle, I felt fortunate to have had the opportunity to get to know him better. I found him to be a solid, reliable friend and a steadfast sailor.

In the words of Patrick O’Brian, “I’d share a mess with either of you again and I’d be all the better for it.”

Craig’s voyage from Gray’s Harbor to San Francisco was the beginning of a year-long sabbatical from his work at Seattle City Light. The author lives in Woodinville, WA with his wife and son. Most summers the family heads up to the San Juan Islands or the Canadian Gulf Islands aboard their sailboat Cool Breez’n.

View all posts by Craig Lukin