Waves of rising heat seem to distort visions of the distance, and the sounds of insects seem to increase as everything else grows more silent. The surface of the water has assumed a flat, patchy appearance. Wind speed has dropped below 5 knots and appears to be headed through the floor! It’s time to dig deep into the bag of tricks if you’re going to win this one. Whether you’re cruising with the family and trying to coax a few knots and miles out of a passage or you’re racing against friends, summoning up a few light air racing tricks will help to increase your spectrum of options.

If you know that the race is going to be run in light air or you’re going to be crossing through a high pressure ridgeline, you may already be further up the learning curve. Set the boat up accordingly, and only take necessary equipment and a minimum of backups. One design boats will want to set up their rigs for the expected light weather. Keeping your boat light will pay big dividends, and the longer the passage, the greater the payback. Kenny Read, now President of North Sails and former World Champion J-24 sailor, suggests easing the upper shroud tension to 500 lbs. and the lowers to 250 lbs. on a Loos Gauge for expected wind speeds of three to four knots on those smaller One Designs. The resulting six to eight inch of headstay sag will add shape to the 150% genoa, add prebend to the lower part of the mast and flatten the bottom of the main. Shroud tensioning on One Designs acts much the same way as runner/check stay tension on larger boats in helping to control sail shape. On smaller boats, the shrouds need to be tensioned in concert with one another to ensure maximum performance from both main and headsail, and that can only be done prior to the race. On larger boats you will want to pay attention to how your backstay, runners and check stays are offset to your headstay, inner forestay and baby stay if you have those mast control options. Ultimately, the shape of your mast will influence the shape of your mainsail, and for light air sailing you will want a fuller, more powerful main to take advantage of every wisp of wind.

Current and tide also play an increasingly important role in winning races as the wind drops off. If the current is favorable and is expected to remain that way for some time, obviously, the smart racers will try to spend the most time in the strongest current. If the current or tide is foul, it may become critical to find shallow water towards the mark with less current and keep open the possibility of anchoring rather than drifting backwards if the wind completely shuts down. Passagemakers will also find that current plays an increasingly significant aspect in their daily runs as the wind goes light. With boat speed through the water reduced by light winds, the amount of speed over the ground gained in favorable Gulf Stream currents, as an example, will provide a larger component to the overall speed over the ground. The wind speed may only grant you a knot or two of speed through the water, but with a favorable current of three or four knots, your overall speed over the bottom will keep you moving towards your destination at five or six knots.

The proper angle of heel

While working to weather, it’s important to keep sails “quiet” and consistently working at their optimum. The boat may need to be heeled over to a 10 or 15 degree angle of heel by moving crew weight to the leeward side and centering them in the middle of the boat in order to help hold sails to the leeward side. Each boat has its own preferred attitude and weight distribution, but generally, keeping the weight centered helps to reduce pitching in the left over swell or waves and may get the stern out of the water, reducing wetted surface. Read says, “J-24’s are a little different from most One Designs. They tend to drag their sterns, so in light air it’s important to keep the weight forward and low. Sometimes we’ll have most of the guys down below on the leeward side. When we’re in flat water, one or two of the crew may even be forward of the bulkhead.” He goes on to mention, “Over heeling is not fast for the keel on a J-24. We try to only heel the boat enough to keep the sails out. Even if there’s a little lee helm, it’s better to fight a little lee helm than to induce drag in the keel.” Bigger boats operate in much the same way, although each will have its own characteristics. Keeping the sails “flopped out” to leeward with wind quietly and smoothly flowing across them will help to get the most out of each puff. 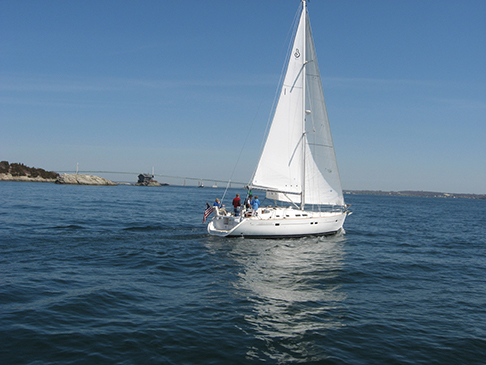 In order to power up the sails, the Apparent Wind Angle may need to be increased to as much as 50 degrees as the wind drops to drifting conditions, but in order to achieve maximum performance on the race course, on larger boats keep a record of wind speed, wind angle, and the resultant boat speed in order to develop accurate light air polars. If you’re lacking electronic instrumentation, you may not be able to generate highly accurate data for good quantitative analysis. But the theory remains the same. Sail the boat to achieve the greatest velocity towards the mark or your intended waypoint, keeping in mind that you don’t need to make the boat go the fastest in the fleet. You just need to get to the mark first or better understand how to get the most out of your boat on a light air passage.

As the wind angle is opened up to keep the boat moving the sheet lead will need to be moved outboard and forward in order to open the slot between the genoa and main and keep sails at their peak performance. If the sail cloth is too heavy to allow good, consistent sail shape in the Light Number 1 range, it may become necessary to change to a wind seeker or drifter in less than four knots of breeze if you have that available. Keep the Light Number 1 in a position to go back up quickly, especially if there is a leftover sea that causes surge loading in the sails as the boat pitches off of a wave; the drifting sails can be easily damaged. More sails or larger sails do not necessarily result in more boat speed in light air. Staysails seldom work well in conjunction with larger headsails in light air. However, having said that, sometimes smaller sails with less fabric weighing them down, have the ability to fly when other larger sails merely droop and only interfere with air flow across something that is working.

Throughout sail changing maneuvers, crew movement must be kept to a minimum, and walking softly is required. Jarring motions on deck translate into wild gyrations at the masthead, shaking wind out of sails and slowing the boat down. 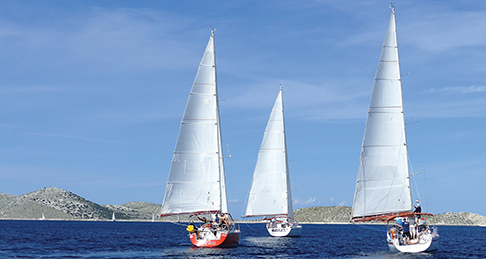 Just as tacking angles widen in light air, jibing angles also widen. If your destination or the mark is located directly downwind, it gets progressively more difficult to get there as the wind gets lighter. On one hand, to keep the boat moving, it is necessary to get the apparent wind forward; on the other hand, tactically, it is better to maintain a deeper course. The way to balance these two mutually exclusive conditions is to bring the wind forward of the beam, generate boat speed and more apparent wind, and bear away closer to the desired course while keeping the spinnaker up and pulling. Movements with the pole need to be smooth in order to keep from shaking the wind out of the sail. In the lightest conditions, sometimes keeping the outboard pole end low will help to steady the luff of the sail. Choking down the sheet may also help to close off the leech of the sail, keeping the sail inflated, and it may help to hold the sail away from the boat as additional heel is induced. Under normal circumstances it may not be the ideal way to trim the chute, but light air sometimes requires innovative solutions. Occasionally, in the lightest conditions, the only way to fly the spinnaker is to reef or drop the main, allowing at least one sail to work properly.

The helmsman can help the whole process by moving the rudder as little as possible. Tiny moves made gently will help to keep the boat going. And to help the helmsman and trimmers know where the wind is and what it is doing, wool telltales taped to the shrouds 10 feet apart will help to indicate both wind speed and direction and how the wind shear is affected at various heights up the mast. Trimmers can trim to the greater wind aloft or to the greater sail area lower down on the sails.

As the wind drops to nil, try to get to the side of the course from which the new breeze is expected. Look for wind under clouds; frequently the clouds set up their own circulation and boats underneath can be ghosting along while others are parked on a mirror. We have used the technique of “connecting the dots” below the clouds on several round the world races as well as other transatlantic passages. The light breezes may be indicated by “cats’ paws” on the surface of the water, but that is not necessarily the case. Occasionally the wind is higher aloft due to the wind shear, and it may not be indicated on the surface. When cold water and warm air are present, as in Marblehead to Halifax races or early season sailing in the Great Lakes, wind shear will be at its maximum. The cold water sets up a buffer of cold air at the water’s surface – a marine layer of air – that keeps the warmer air from getting all the way down to the water’s surface. The result is that your instruments may indicate 15 knot winds at the masthead but your sails are flopping from side to side in drifting mode. Identify where the wind is actually working and try to trim to that.

Above everything else, remain patient and work consistently while battling the light conditions. Winning a light air race and getting where you’re going frequently requires more technical skill than racing in moderate conditions; enjoy the challenge. And if the other guy loses his patience and starts spinning the helm from lock to lock, you’re certain to win!