While kayaking back to the boat after a hike ashore, I decided to do a lap around the hull to take a look at the condition of our bottom paint at the waterline. As I neared, the paint towards the bow section appeared to be in good condition, but upon closer inspection I could see a slight tinge of blue through the black paint. I instantly knew what it was: our old blue bottom paint was appearing through the one coat of black we had put on two years prior. It was time to paint. 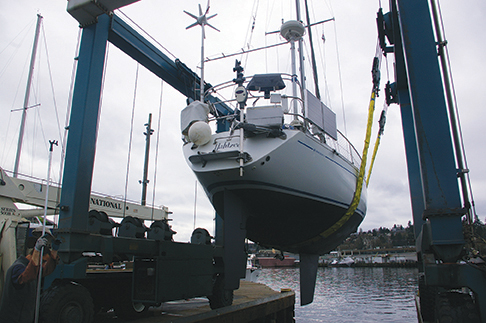 I quickly booked a haul out and spot in a good do-it-yourself boatyard in Seattle and started researching paints. A month later I stood and watched in anticipation as Yahtzee was hoisted from the water. Having been two years, I wasn’t sure what to expect from the one coat of ablative paint we had put on. I knew it was thinning—as any good ablative bottom paint should do—but would the bottom be covered in slime, barnacles and other growth?

To my pleasant surprise, the bottom looked great and after being pressure washed and put on jack stands to dry, there were only a few spots where blue was showing through—most notably below the waterline at the bow. A small part of me considered just slapping on a new coat of paint around the waterline, but that would only get me so far and would bring me back to the boatyard in a shorter amount of time. Also, the keel had a few blemishes that needed to be addressed, so I decided to paint with three coats after fixing those spots. 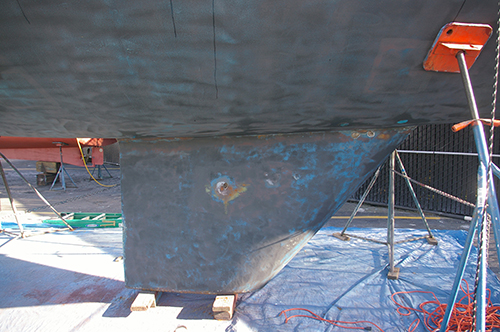 THE PREP
Before I could paint anything, I had to address the keel issues and prep the bottom. There were a few blisters on the keel and one golf ball-sized spot where galvanic corrosion had eaten a divot in the iron from being in what was presumably a hot marina for a few years.

I considered several ways of fixing these and decided to go with a combination of primer and filler before painting. An alternative would have been to completely strip the keel and barrier coat the whole thing. Epoxy barrier coats are an excellent way to seal your bottom and there is a good argument, especially for older boats like ours, to completely take the bottom down to the gel coat and apply one of these before putting on any paint. The best way to achieve this, though, would be to have it professionally power sanded—maybe next time.

To prep the spots, I grinded them out and then used a vacuum sander to clean around the edges. I then used acetone to wipe any remaining dust out of the spots and then let them thoroughly dry.

For the barrier coat I went with Sea Hawk’s two-part epoxy, Tuff Stuff High-Build, mixed it together in a small mixing container and brushed a generous coat on each spot. It was easy to mix and apply, and it set up fairly quickly. When that was dry, I used Sea Hawk’s epoxy system, Hawk Epoxy, and microfiller to mix a putty that would adhere to and fill the spots. Again, this was a simple mixture and I let it sit overnight to dry before sanding it.

The filler had completely hardened by the following morning and I sanded the areas flat and smooth before applying one more coat of Tuff Stuff primer. Once dry, these spots were ready to paint. 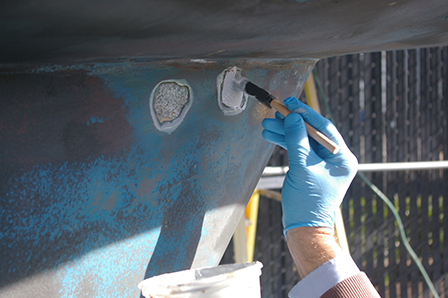 To prepare the rest of the bottom, I taped off the waterline then used the vacuum sander to remove and even out the old paint. I was reluctant to keep adding more paint on top of the older coats and the sander did an efficient job of fairing out the bottom. Also, it didn’t take me as long as I thought it would—partly due to the good condition of the bottom—and it wasn’t as messy as I had anticipated. 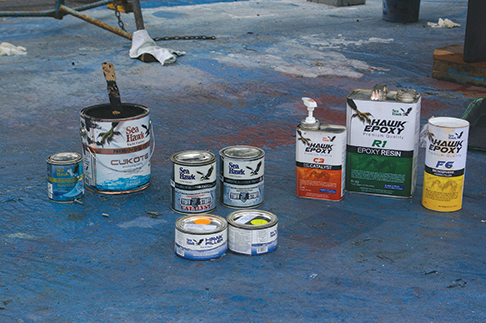 Two years ago we used Sea Hawk’s Cukote Biocide Plus on the recommendation of the boatyard manager and since it turned out so well, I wanted to stay with the same product. Cutoke is an ablative paint, which means it will polish itself as the boat moves, releasing more slime-fighting biocide in the process. This is a good choice for boaters who get off the dock frequently or for those who haul the boat out for the season, as ablatives don’t lose effectiveness when they have dried out and then go back in the water. (For a full rundown on paint choices for your boat, see the article “Bottom Paint for the Long Haul” in the April 2014 issue of BWS.)

When I went to the boatyard to find the paint, though, they didn’t have it in black and when I asked if it could be ordered, I was surprised to learn that Biocide Plus is no longer available (unless it’s still on the shelf). This is because the slime reducing additive Irgarol®—which is made by the chemical company BASF and has proven quite affective—is not accessible to paint companies anymore.

This seemed odd, as Irgarol is purported to still be in use, so I called Sea Hawk and talked to CEO Erik Norrie about Irgarol and Sea Hawk’s solution to not having it available. Erik said that it is a bit of a mystery as to why it is no longer available to them and others, but the theories range from environmental issues to simply not being a federally registered product any longer. And it may be the result of one of BASF’s plants shutting down, which means the product could be available again at some point. Either way, Sea Hawk cut it out of their paints and instead created a replacement additive called Biocop TF that can be mixed in with their Cukote, AF-33, Tropikote and Talon paints before applying it to your boat’s bottom.

Products like Irgarol and Sea Hawk’s TF are biocide additives that are designed to stop slime from growing, which if it does, leads to barnacle growth. The most popular biocide in bottom paint is cuprous oxide, which ​is released from the paint over time to continually ward off hard growth. Paints will contain various levels of cuprous oxide and it is worth knowing before you buy.

The bottom paint market seems to be a constantly changing atmosphere as environmental policies concerning their use are enacted and enforced. Metal-free bottom paints with Econea continue to be looked at as the wave of the future, but real-world tests are now showing these to be generally less effective than their counterparts.

After looking into using various paints and their additives, I decided to stick with what worked for us before. What I ended up with for Yahtzee was three gallons of Cukote in black and three pints of the Biocop TF additive in gray as a replacement for the Biocide Plus. Through Sea Hawk I was also able to connect with their West Coast representative, Tony Bulpin, who was hugely helpful in walking me through the process of how to mix and apply the paint and additive I had chosen.

Whatever paint you choose to go with, it’s important to understand the ingredients that are in it, how they work to protect the bottom of your boat and how long they will last in your local waters. So do your homework, talk to professionals and those at your local chandleries and boatyards who regularly see the results of many different types of paints and additives. 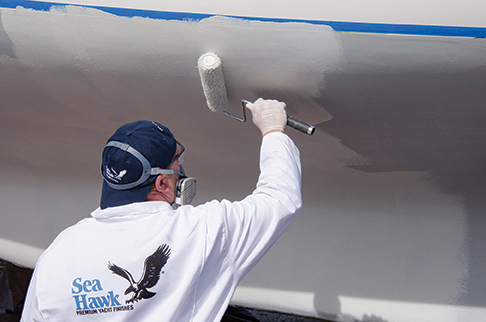 TIME TO PAINT
When it finally came time to roll on the new paint, I simply poured a gallon of the Cukote into a large mixing bucket and then mixed in the additive with a wooden stir stick. At first I was somewhat concerned that the gray Biocop would turn my black paint to a dark gray, but once thoroughly mixed and applied, it didn’t end up changing the color much.

As happens in the boatyard, I was a little behind schedule to get three coats of paint on before being splashed. I did my first coat in the morning then came back in the evening to do the second. The paint was completely dry by then and I ran a damp rag over it to remove any boatyard dust that may have settled in the interim. I let that second coat sit overnight and asked the boatyard to reposition the jack stands first thing in the morning. For my third coat I put more emphasis on the waterline, keel, rudder and over the spots where the jack stands were previously placed.

I let this third coat sit until the boat went back in the water that afternoon. The paint was dry when it did, but the lift operator insisted that we put pieces of paper between the lifting straps and paint so it wouldn’t blemish the new bottom or rub off on the straps.

END RESULTS
After two years and one coat, I was very happy with the results of my original paint and am hoping that we can stretch that number even longer with three coats. I like to go with what I know, and am confident that the Cukote with the new Biocop TF additive will be just as affective as the Cukote Biocide Plus that I had used before, if not better.

Looking to the future and knowing that our keel may need continued attention, I am going to look into the price of sand blasting and re-doing the entire bottom. Because keeping a clean bottom is not only essential to cruising performance, it’s also a lot less work in the long run, which means I can spend more time sailing and less time in the boatyard.