Preparation will help you avoid emergencies and turn them instead into adventures. And the lessons learned through these experiences are worth sharing with others.  (published April 2015)

Alone on deck at 2:15 a.m., the Caribbean night was quiet as Lia Ditton slept below on her side of the catamaran and the boat moved steadily along at 8 knots. Suddenly, a bang sounded on the port side deck that was vaguely reminiscent of the noise made by rod rigging. Without hesitation, I bolted out of the door leading to the deck, and somehow, Lia was only a few steps behind me. Such was the start to another “learning experience”, as we took initial action to reduce loads on the rig, secure the flailing rod rigging that was still attached to the top of the mast and later affect a jury rig so we could complete the final 800 miles to the U.S.

The lessons learned would serve us well on more than one occasion, and the stories told and re-told have provided others with a basic understanding of emergency procedures when the unlikely inevitably happens. Because if you sail long enough, everything happens—even the unlikely.

While I still sail in quite a few races and deliveries with full crews, I’m now sailing with an increasing number of people who would like to improve their own shorthanded or singlehanded sailing skills. Some are successfully retired business people, living a dream that kept them going while working and raising a family. Some are couples putting in an effort to polish their skills so they can better help each other. And some are friends on their own adventure. At one time or another, each of them will find themselves alone on deck. I’m lucky to know and sail with them all, whether we’re sailing offshore on their C&C 35 or something a bit larger.

What does it mean, though, to be alone on deck, totally self-reliant or relying on only one other person? In reality, we can enlist support prior to departure and even have shoreside support while we’re underway, so it’s not really necessary to be totally sequestered any longer. Help can be a satellite phone call away. And yet, those are still only “words of wisdom” that are being offered. The shorthanded sailor still needs to be a jack of all trades at times. Meals, maintenance and repairs, sail selection, navigation and communications schedules all still need to be attended to, and it ultimately falls on the one or two people on board to do all of that.

Equipment failures are not the only things to prepare for, of course. On one occasion I had been the person asleep during an off watch. With the boat pounding and lurching at high speed, I came on deck to find a crew concerned about the speed but unfamiliar with procedures for slowing the boat down since we were already under reduced sail. A few minutes spent preparing and deploying warps from secure points aft not only comforted everyone onboard, but it’s lessons like these that have helped prepare them for years of long distance cruising in remote places.
Even regular sleep offshore is something of a learned art. How does one remain alert despite the fact that we all need rest? When sailing doublehanded with Lia and others, we often utilize a four hours on, four hours off watch schedule. With some doublehanded projects or when conditions are unsettled, I’ve done three hours on and three hours off so the watches aren’t as long. Of course, that also implies that the sleep periods are also shorter. In heavy weather when forced to hand steer, we have even experimented with two on, two off and sleeping near the helmsman to facilitate quick awakening if conditions require two people.

Singlehanders have a somewhat more difficult situation when it comes to watch keeping. As singlehanders, we are still responsible for the safe navigation of our vessels. It can certainly be argued that if the only person aboard is asleep, it is an irresponsible way of maintaining a watch.  It can also be argued that with radar detectors (which have their own limitations), proper sleep management and regular visual observations, a good watch can be maintained by one person.

When I did my first singlehanded passage, I ate a modified macrobiotic diet in order to reduce the amount of sleep that I required. I only needed to sleep between four and six hours per day, and those times were generally in mid-morning and early evening. At night, I would meditate, reducing my own energy consumption while remaining aware of my surroundings. There are more sophisticated approaches, and Dr. Claudio Stampi has pioneered sleep awareness training for many singlehanders. His method of short naps has enabled Ellen MacArthur, Giovanni Soldini, J.P. Mouligne and many others to safely and successfully race singlehandedly around the world.

When I am doublehanding with someone, I always request that if they have a question or a problem while I’m off watch, they should wake me up early to help with the situation. I find that it’s quite a bit easier to avoid a problem rather than fix a problem or equipment failure. Whether encountering oncoming vessels in the middle of the night or deciding about a sail change, it’s usually better to have a couple of sets of eyes and ideas than only one. And if fatigue is an issue, doublehanders are often only four hours away from the next nap. It’s usually better to sacrifice a little sleep rather than the safety of the vessel, equipment or other person on board.

Sail changes are usually easier and more efficient when done early, whether sailing alone or with one other person. Of course, a hasty sail change may need to be reconsidered, but with roller furling headsails, changing down can often be relatively easy. If we’re going into the nighttime with unsettled conditions, I’ll often suggest reefing the main while daylight is still present. If less sail area is required later that night, rolling up a headsail can be quickly and easily executed—usually from the cockpit. And of course, clipping one’s harness to jack lines or a hard point can prevent a personal disaster when going out of the cockpit in unsuitable conditions.

Lessons learned in practice situations or with sailors experienced in heavy weather sailing can become invaluable over time. Years ago, when Peter Bourke was preparing for his first Bermuda One-Two race, he and I would practice sailing in heavy weather, delaying our practice sessions until conditions were sufficiently adverse to provide credible heavy weather. If the wind wasn’t blowing over 35 knots, we wouldn’t bother to practice heavy weather sailing skills. Of course, those sessions were undertaken after we had spent pleasant, calmer days setting storm sails and practicing the art of reefing alone. When he was preparing for his entry in the OSTAR, a single-handed transatlantic race a few years later, we timed and monitored maneuvers in heavy weather conditions during our delivery to England prior to the start of the race.  Even if practice doesn’t make perfect, it certainly helps when the weather conditions go down the drain.

Storm sails should be set early. The first things we practice when I’m sailing with people who are new to shorthanded sailing is setting the storm trysail and jib. While sailing in 10 to 15 knots of wind, we’ll actually put the storm trysail up in order to make sure that the gate on the main sail track works properly and is located in a convenient position. If there is a separate trysail track on the mast, having the gate a couple of feet above the bottom of the track will allow the trysail’s sliders to be put on the track from above. The sliders can be stacked without the need to hold them up while “loading the track” with the sail’s sliders. If you’ve only got one hand for the task and you’re trying to hold on to the boat in heavy weather for your own safety, you will appreciate making the task as easy as possible.

Often, if there isn’t a separate trysail track on the mast, having the gate located well above the stack of mainsail sliders is a good place to have access for the storm trysail. If the only way to get the mainsail track open for the trysail is to insert the sliders from the bottom of the track, that implies that before the trysail is put up, the main needs to be completely taken down off the track. In storm conditions it can be problematic to have the luff of the main detached from the track. Figure out how you’re going to set the storm trysail quickly and easily while you’re in comfortable conditions. When you need to do it in a hurry, you’ll be glad to know that any difficulties have been resolved beforehand.

Heavy weather can always present a challenge. Practice setting heavy weather sails, deploying warps and think through emergency procedures while sailing in good weather. You will have enough on your agenda when the weather turns bad, and there’s no need to be running through heavy weather tactics for the first time when storm conditions actually occur. A friend of mine once told me that if you sail long enough, everything will happen to you out there. Preparation will help avoid emergencies and turn them instead into “adventures.” 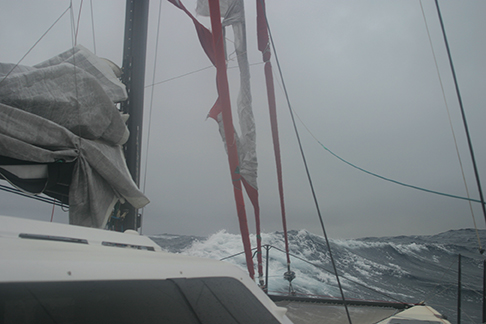 When doing long passages, I’ll often go aloft prior to the trip or during benign conditions to inspect the rig. Hopefully, that will save me a trip aloft during storm conditions to fix a problem that could have been avoided in the first place. Singlehanders of course can still get aloft using self-ascending units such as ATN’s Top Climber.

Landfall is an occasion that we all look forward to. We know it’s coming. And we all know there can be some questions that need to be addressed. What kind of sea state will we encounter as we get into shallower water? Will there be fishing boats or other traffic in the area? Will it be a daylight or nighttime approach? Will the weather be good or bad?

We will be able to best deal with these questions and the situations they imply if we’re well rested and fed prior to making landfall. Rest up, charge batteries, and make sure quick and easy meals are readily available as you make your approach for the final day or two at sea.

When you’re single or shorthanded sailing, you still have assets you can draw upon. You—and your crew—are still the most valuable assets aboard your boat. Take the time to practice procedures, and if possible sail with people whose skills are beyond reproach. You will then be able to sharpen your own skills early and have taken care to protect your most valuable assets: you, your crew and your boat.