In the 2011 Fastnet Race, the mega maxi racer Rambler was leading the fleet when they rounded the infamous Fastnet Rock lighthouse. Then, the keel fell off and the big boat rolled over and turned turtle. The crew in the cockpit managed to crab their way upwards as the boat rolled but the rest were trapped below decks or thrown into the water.

With heroic efforts, all but four of the crew were hauled onto the overturned Rambler. The four who were not able to get back aboard drifted away with the current, arms linked. The EPIRB and all of the PLBs on Rambler were inside the overturned boat, except one. Mick Harvey of Newport, R.I. had his PLB in his fanny pack and was able to set it off.

The signal reached the COSPAS-SARSAT satellites, was transmitted to the Irish Coast Guard and the crew of Rambler was saved. Even the four who drifted away were found and rescued. All because of one little $250 Personal Locator Beacon. Without it, the end result for the whole crew would have been tragically different.

WHAT PLBs DO
The ingenious little beacons that are on the market have three basic signaling functions. The basic signal is a 406 MHz signal that is broadcast to the satellites that are always in view on earth’s orbit. The signal is the same frequency used by conventional EPIRBs. As in the incident above, the distress signal received by the satellite is then transmitted to the worldwide network of search and rescue teams. This all takes about three minutes.

When you buy a PLB in the U.S., you register it with NOAA, which then enters your information into a database that is available to all search and rescue operations. The data includes your name, address and contact information so the services know who they are looking for and who to contact ashore for more information about you.
PLBs also have a GPS receiver built into them that provides your location within 100 meters to all who receive the distress signal. So when Mick Harvey set off his PLB, rescuers knew immediately who was in distress, what boat he was on and exactly where he was near Fastnet Rock.
PLBs also have a local homing beacon built into them that broadcasts on 121.5 MHz. This signal allows rescuers, who already know your coordinates, to actually home in on your beacon and you. This secondary beacon makes the final moments of the rescue a lot easier and quicker for the rescue team.
Finally, PLBs have a built in strobe light that will give rescuers a visual signal that can be seen for up to five miles. With the GPS coordinates, the 121.5 homing beacon and the visual strobe light, rescuers have the information they need to find and save you. 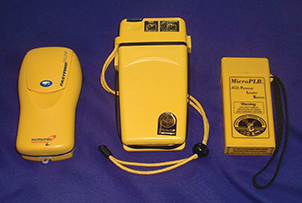 PLB BRANDS
The leaders in the PLB field in the U.S. are ACR and McMurdo. ACR has been in the safety business for many years and is a leader in EPIRB technology. The company pioneered adding GPS to EPIRBs and thus was in a great position to develop PLBs with 406 MHz technology coupled to the GPS location data. ACR has several PLBs on the market with the ResQLink 406 and ResQlink 406 +plus being the most modern iterations of the ACR devices. The 406 +plus is the same as the 406 but has a case that floats and the ability to broadcast an “I am Okay” text message to anyone following your progress. The ResQLink units retail for about $250.
ACR also produces the AquaLink 406 and the Aqualink 305C View. These are heavier and larger units. The 305C View has a LED screen that shows you that the unit is working, that the battery is charged and will give you a “time for service” message. The Aqua Link 406 and 305C View units retail for $430 and $499 respectively.
McMurdo also has been in the safety at sea business for a long time and has several PLBs on the market that work well for sailors and cruisers. The FastFind 220 has a buoyant case and is waterproof to 30 feet, both good features. The 220 has a battery life of about 30 hours. The FastFind Max G is similar to the 220 but has a five year battery storage life and will broadcast on 406 and 121.5 MHz for 48 hours. The 220 and Max G retail for about $250 and $550 respectively.

A company called Ocean Signal has come out with what they tout as the smallest PLB on the market. It fits in the palm of your hand or a shirt pocket but still has all of the signaling capability of the larger units from ACR and McMurdo. The Ocean Signal RescueME PLB1 retails for $370.

AIS LOCATOR BEACONS
With the advent of Automatic Identification System (AIS) technology in the world’s shipping and now pleasure fleets, the opportunity to use the VHF based AIS technology in personal locator beacons became evident. The AIS beacons combine GPS location data with the AIS signal, so a person in distress can activate the beacon and all vessels within about four miles that have AIS receivers will see a distress icon on their chartplotters or AIS screens. Scroll over this icon and you will see the GPS coordinates, range and bearing to the beacon, making the rescue maneuvers much easier.
Kannad has introduced the Safety Link R10 that has a 24 hour battery life and retails for about $300. The McMurdo Smart Find S10 retails for about $250.

Whether you choose to go with a 406-satellite beacon or the newer AIS locator beacons, every crewmember on your boat should have a PLB in his or her pocket every time they go on deck, particularly if the weather is bouncy and the boat is lurching over the waves. A small handheld PLB saved the crew of Rambler. One could save your life, too. Since the COPA-SARSAT satellite system was deployed in 1982, more than 25,000 souls have been saved by the EPIRB and PLB technology.