In the Gulf of Vietnam, they were chased by pirates and barely got away. Here’s what happened and what they learned  (published May 2017)

“Rebecca, QUICK, I need another flare from the hanging locker!”

The jib alone was just barely pulling Brick House southward at a pace slower than a lame lamb, but there was no hurry, we were saving diesel fuel. The south west coast of Vietnam was 100 miles to our east and the coast of Thailand lay 125 miles to the west. Here at the southern edge of the Gulf of Thailand, the hundreds of traditional wood fishing boats have thinned to a very few.

From several miles away, I monitored our approach to a group of three anchored fishing boats. Depending on the type of fishing they do, some boats anchor during the day and fish at night.

With the slight wind out of the north west, I adjusted the Monitor self-steering’s windvane to sail a safe quarter mile off their sterns, in order to pass the boats on our starboard side. As Brick House slipped by, I could see that the 65-foot long mother ship had the two smaller fishing boats tied by lines, streaming off its stern.

But soon there was a puff of black smoke from the mother ship and the boats began to move in a counter clockwise circle. This soon put them on a perfect broadside collision course with us. There were at least four fishermen on the forward deck of the mother ship who were watching closely as our tracks converged. There were no friendly smiles or hand waves. Shining my high intensity green laser at the people on deck and at the wheelhouse did nothing to persuade them to change their course.

The mother ship was straining from its tow causing it to list hard to starboard as it struggled to turn toward us and narrow the distance. In the fluid maneuvering, they had now set up an approach to bring their port side to come along our starboard side.

One towed boat was actually attached to a long line fastened forward of their port midship and, possibly because its rudder was turned, was being thrown out to the side like a water skier in a turn. If they continued what looked like a docking maneuver, or if Brick House slowed down, that tow line would soon rake into our backstay creating all sorts of havoc.

Quickly, I hit the starter key on our diesel and throttled up. This lamb suddenly shed its sheepish coat. Certainly, these guys were out to cause us harm. It was a very serious chase in slow motion like a conch after a sea urchin. Because of the drag of their tow, we held our slim distance, but then very slowly we pulled further ahead. 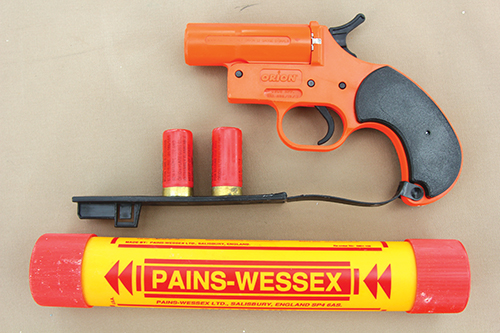 This gave me time to have Rebecca hand me an expired parachute flare. With our boat on autopilot, I pressed my legs against the stern rail for support. Aiming the parachute flare, I pulled the safety pin and let the hammer mechanism fly. Nothing: the expired flare was a total dud. We had one more flare close at hand. Quickly, the end caps were unwrapped, I then aimed toward the boat, which was following behind, and pulled the trigger.

There was a loud KABANG, that rung Rebecca’s ears and sent our ship’s cat flying into a dark bunk. An eight-foot diameter explosion of gray smoke obscured the stern of Brick House. The recoil was not much in my left hand but the disappointment was great. Holding the flare slightly higher than horizontal, the drop rate was so great, the flare only went 50 feet before boring into the sea. It needed to fly an additional 100 feet to hit where I hoped. But the effect put a smile on my face. The pirates on the foredeck went running to the wheelhouse and, at the same moment, all forward movement of the fishing boat stopped.

I would have loved to fire another flare landing it with greater accuracy but our supply is very limited, plus, what if they decided to ignore the warning, drop the drag of their tows and come after us again? We had to think ammo conservation.

We continued to quickly motor sail south. Rebecca kept a binocular watch on the fishing boats. It was a relief to see them circle into the wind and anchor as they had been a short time before. And all was back to normal.

There is a superstition among fishermen in S.E. Asian countries that a fishing boat can wipe away bad fishing luck by passing close across the bow of another moving vessel. Cruising sailboats become an easy mark for this dangerous maneuver. To dissuade boats from doing this,  I shine a powerful green laser light at the wheelhouse. Four out of four fishing boats hit with my laser made an abrupt turn, figuring it would be better luck to pass astern of our sailboat.

When the pirate mother ship picked up anchor and maneuvered in our direction, it became obvious they could not reach us in time to pass across our bow so I assumed they would turn to cross our stern. All my innocent misunderstandings of their true intentions allowed the tense situation to suddenly develop. As they tried to come alongside, it was immediately more important to avoid a collision.

With that problem solved, the priority became protecting ourselves and stopping the pirates in their pursuit. If we had a gun on board, a couple of shots across their deck or into the wheelhouse would certainly have scared them away. If these pirates were able to gain a proximity so close they would then board our boat, that becomes quite a different level of anxiety and heightened defense on our part.

The Gulf of Thailand is not known to be a “pirate” area. In hindsight, these were fishermen who became pirates of opportunity and did not appear armed. If someone in our situation decided to wound or kill these unarmed pirates, while they were still on their own boat and someone was left in condition enough to tell what happened, there could be serious consequences awaiting the cruiser in their next port. It is not unusual for victims in many countries to then become the criminal for defending themselves with excessive force. Plus, it is highly illegal to possess firearms in many countries.

In our situation, what if I had burned their boat or harmed these pirates with my flares and they were able to claim to officials that they were simply having mechanical problems with their steering, or they just wanted to sell us fish? I do not want to deal with corrupt foreign court systems and predatory lawyers. Our goal was to stop the piracy without causing further problems for ourselves. We could ratchet up our defense as needed. Hopefully these pirates have gone away learning that not all sailboats are easy targets.

There are known pirate areas like the waters between the south-eastern Philippines and the north east coast of Borneo. If a high-speed powerboat full of men, in dark T-shirts with the word “Police” across the chest, approaches a cruising boat in this area, a cruiser’s best option is to immediately cut loose with rocket propelled grenades.

Waiting for clarity in these waters can prove disastrous as it has for the crew of commercial shipping and cruisers. This past November, a German couple were attacked on their sailboat. The wife was killed and the husband was being held for ransom and then decapitated when no money was provided. Such attacks have become a pattern. Obviously, most cruisers find it prudent to steer wide of known pirate areas.

Using a yacht’s distress signaling equipment, like flares, to ward off the bad guys, has proven effective for a number of world roaming cruisers. Twelve gauge, pistol-fired flares like the orange colored Orion flare launcher will fly 100 yards with the proper trajectory. These flares will burn underwater so if one should land on the deck of a boat, it cannot be easily extinguished.

Parachute flares launched from a tube can fly 300 yards. In a defensive situation, the first flare launched should have a trajectory of 45 degrees for ranging purposes. The expired handheld flares used in our pirate encounter expired February 1996. So far, we have a 50 percent failure rate with that vintage. In a tense situation, to pull the pin on a flare being gripped in your hand, only to have nothing happen, is a real “Oh sh*t” moment. 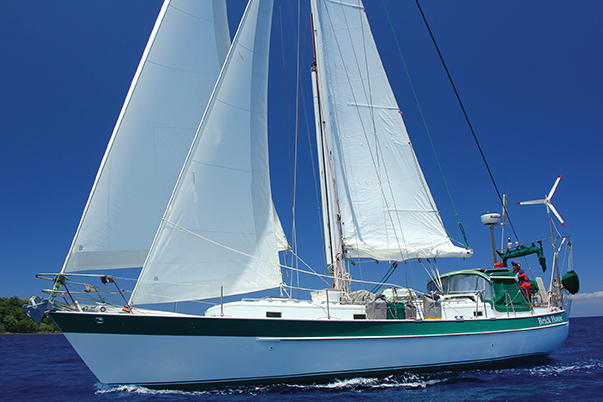 Contributing Editors Patrick and Rebecca Childress live and cruise aboard their Valiant 40, Brick House. Originally based in Newport, RI, they have been slowly sailing westward on a projected circumnavigation for the past 10 years.