With each ocean passage on board Horizon, our Hans Christian 38, we’ve made a conscious effort to improve our sailing performance. Our sailing skills got better over time, of course, but a simple tool designed to measure our performance actually enhances the overall experience of the voyage as well.

In our early passages, we noted our position, course and speed (usually on a yellow Post-It® note) in eight-hour intervals and transferred the 24-hour position onto our charts within a rough log kept in a spiral notebook. It was incomplete at best. We gradually crammed more and more information onto those little sticky notes until we ran out of space and, on more than one occasion, we’d lose one for several days when it inadvertently stuck to something else.

All of this led to the development of a passage performance worksheet, upon which we are able to record relevant information for several days on one sheet. This material is later transferred into our daily ship’s log for a permanent record.

In addition to logging our position, speed and course (true and/or magnetic), noting the barometric pressure in eight-hour intervals provides an at-a-glance look at trends. Gradually increasing pressure could indicate lighter sailing conditions, while falling pressure generally presages unsettled weather. In either case, such information is a valuable tool in our decision-making arsenal. Slight changes in barometric pressure near the equator have greater significance than those at higher latitudes and must be carefully observed.

We found that asking ourselves to make note of the direction and speed of the wind, sea state and cloud cover caused us to be more aware of specific conditions. Is the wind building in strength? Has the direction changed in the past 36 hours? Have the scattered altocumulus clouds of yesterday turned into broken cumulonimbus clouds today? It’s easy to get lulled into complacency, particularly in trade wind sailing, and greater awareness of cloud formations keeps us on our toes.

SURVEY SAYS…
During our recent pass through the South Pacific, we met sailors from around the world and discussed their methods of charting. This informal survey of both professional delivery skippers and non-professional cruisers on boats ranging from a 70-foot Oyster to a 27-foot Vancouver revealed that professionals require their crews to take positions from an hourly to four-hourly basis, recognizing the importance of monitoring weather/sea conditions and keeping accurate records.

According to Eric Bell, a delivery skipper who had just delivered a 70-foot Oyster to Papeete with a crew of four, this has two benefits. First, keeping an hourly log containing position, wind speed and direction, course, sea state, cloud cover, air temperature, barometer and sail configuration required his crew to be actively aware of the sailing conditions at all times and kept them from becoming “bored” during easy sailing spells. He also noted the importance, particularly when sailing on the East Coast, of monitoring the sea temperature, which gave valuable information regarding their proximity to the Gulf Stream. Of course, if a problem occurs with the electronics, he has the ability to use paper charts if necessary.

In our discussions, there were as many variations of charting schedules and the elements they included in their logs as there were boats. Delivery skippers generally maintained a strict charting schedule, where private yachts tended to be more flexible due to smaller crews and watch schedules. Many of the newer private yachts (sailed by the owners and their families) were equipped with electronic chartplotters, and folks were comfortable relying on them to record their positions. Some took their positions as often as every four hours and included course, speed and weather elements, others would take notes “occasionally,” and the majority simply noted their position, course and speed via their chartplotters in 24-hour increments.

While many of the yachts that relied on their chart plotters carried planning charts, few actually utilized them on a daily basis during passages. The few cruisers we spoke with who didn’t have electronic chartplotters tended to maintain more rigid schedules for noting position, course and speed, and all plotted their positions on paper charts every 24 hours. 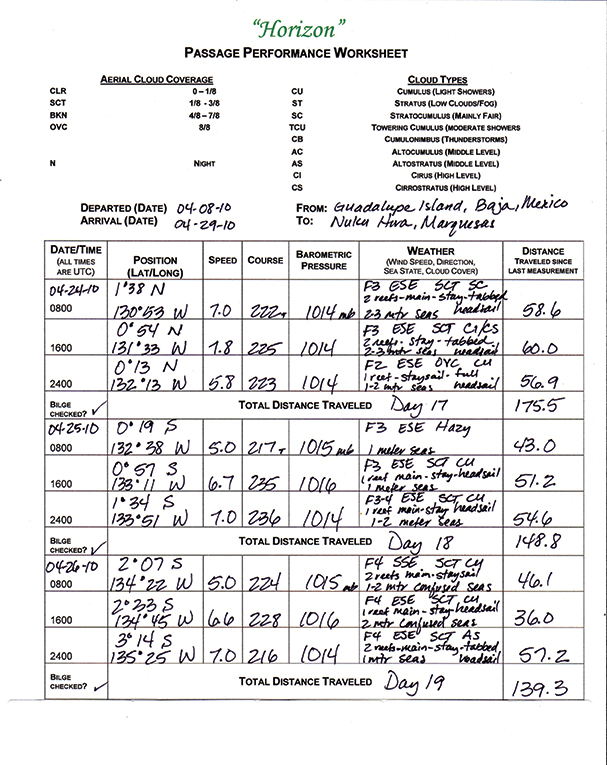 CHALLENGING OURSELVES
While we rate ourselves conservative sailors, preferring to arrive at our destination with minimal damage and stress to ship and crew, we also can’t resist a bit of personal competition. If the daily average during our last passage was 135nm, why not see if we can do better? We reset our Garmin GPS at 0000 UTC each day, so it’s easy to get the exact distance traveled when we take our eight-hour recordings. Of course, your first eight-hour segment may be “long” or “short” depending upon your actual start time.

Our passage performance worksheet has been a valuable tool in capturing relevant information in eight-hour intervals, enabling us to track the trends and changes of several days on a single sheet. You can create a similar worksheet using whatever hourly increments suit your style of cruising as well as information relevant to your location. A similar worksheet could be used when coastal sailing as well. For example, on shorter voyages the crew could be tasked with placing greater emphasis on the swell direction (is it setting you more toward shore?) and significant land features visible when the positions are taken.

In our case, the task of collecting the information challenges us to be more cognizant of current weather conditions by comparing what we see to what was forecast and helping us stay focused on the task of efficiently moving the boat toward our destination. Having accurate measurement of the distances traveled provides a clear snapshot of our daily performance, all without the clutter of sticky notes.

Over the last 10 years of sailing, Marci and Joseph Paravia have covered more than 50,000 nautical miles throughout the Pacific between Glacier Bay, Alaska, Tauranga, New Zealand, westward to the Philippines and into SE Asia aboard Horizon, their 38-foot Hans Christian cutter. Their latest voyage set sail from their homeport of San Diego, California in 2010. They are currently embarked on a circumnavigation and are somewhere in the Atlantic.

View all posts by Marci Paravia