During our crossing of the South Pacific Ocean, we learned of at least two boats that suffered fires caused by short-circuited batteries. Weeks of constant motion can chafe insulation off of cables. During our refit in New Zealand, we were determined to eliminate this potential catastrophe from our Corbin 39 cutter. What originated as a circuit breaker project grew into a major revamp of our electrical system, which now provides for all of our requirements and usually gives us energy to spare.

Cormorant’s house battery bank consists of five group 31 AGM (absorbed glass mat) batteries of 105 amp-hours each. (A good argument can be offered that it would be more efficient to use fewer, larger batteries; however, after I turned 60, I was no longer willing to lift group 4D or 8D batteries.) A normal “OFF-ONE-BOTH-TWO” selector switch allows for starting the engine from the house battery bank or the engine start battery. 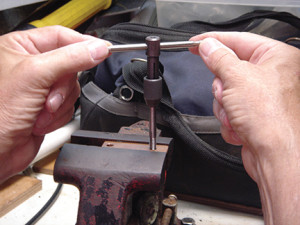 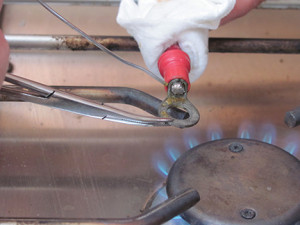 Interconnecting bus bars made from 1/8 inch thick (3mm) by 3/4  inch (19mm) wide solid copper connect each circuit breaker to the positive bus. Each battery is connected to its circuit breaker with a 4 AWG (25 mm2) tinned marine quality cable and soldered ring terminals. Insulation (use the adhesive-lined heat shrink type if possible) must be placed on the terminal shanks to protect against short circuits. This will also help guard against corrosion.

The proper terminal lugs (tinned solid copper) were selected to match the gauge of the wires and the bolt or stud sizes on the batteries and circuit breakers. High quality rosin core solder (Kester 44 or equivalent) was used exclusively. (Never use acid core solder on electrical work.) Extra rosin flux was applied to the bare cable to assist the soldering process.

Some useful tips when soldering battery cable terminals:
1. Wrap a wet paper towel around the cable about one inch (25mm) from the end of the insulation to limit the molten solder from wicking up into the cable. This will also help prevent heat damage to the insulation.
2. Using vise grip pliers, hold the battery terminal over your heat source (stove or propane torch) and fill the cable cavity with solder. When full, insert the cable and add solder until it overflows. Cool quickly with a wet paper towel.
3. Coat the soldered terminals with silicone grease and cover them with heat shrink insulation for maximum corrosion protection.

The circuit breakers are available from Buss, Blue Sea Systems, Ancor, etc., and come in surface mount or panel mount designs. The battery circuit breakers can be manually tripped should it be necessary to disconnect a battery from the system. This is a useful feature for isolating each battery when equalizing or measuring individual battery voltages: just press the red button to open the circuit breaker and isolate the battery.

Most metal working shops can supply copper flat stock cut to your specifications. Use 1/4 inch (6mm) copper bolts, nuts and washers to connect the copper bus bars to the circuit breakers and to connect the various wires and cables to the positive and negative buses. Coat the fasteners and mating surfaces of the bus bars with an anti-oxidant such as OX-Gard. Both of our buses were fastened to the plywood base using insulators cut from scraps of Starboard. Take the time to label each wire and cable as you connect it to the bus. You and the next owner will be glad that you did.

Time spent pre-planning this project will pay handsome dividends:
1. Select a protected place with adequate access to mount the circuit breakers and bus bars that requires no more than one meter (39 inches) of cable between the farthest positive battery terminal and its circuit breaker.
2. Make a sketch of all of the 12-volt consumers and sources that will be connected to the positive and negative bus bars. Add at least 10 percent more for future growth. Also plan for the addition of one or two more circuit breakers. (You will thank yourself for this sooner than you might think! I added one circuit breaker and battery before the project was completed, and have since added one more circuit breaker for a dump load controller for our wind generator.) If you must “double up” on some of the connections, place no more than three ring terminals on one bolt or screw, and stack the terminals carrying the heaviest current next to the bus bar.
3. Remember that you are going to have to be able to add and remove wires from this system, so allow adequate access space.
4. When constructing the bus bars, drill and tap all of the holes for the cable terminal screws, including the 10 percent spares. The bus bars must be thick enough to provide three full threads contact with the bolts. Snug the screws for the 10 percent spares in place—otherwise, you are not likely to remember where you stored them a year from now! 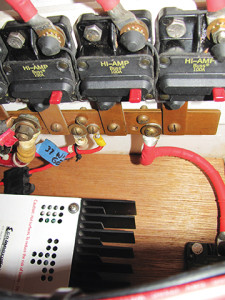 Power sources include a 100-ampere engine driven alternator with a Xantrex smart regulator, three 75-watt solar panels and an Aero6gen wind generator. Each solar panel is individually fused and a single pole on-off-on switch directs power to a solar panel regulator or to the house battery bank. A similar switch directs power from the wind generator directly into the house battery bank or shorts the wind generator to ground to act as a parking brake. The volt and amp meters provide for status monitoring with a selector switch to read individual battery voltages.

Our Aero6gen wind generator provides so much power that we had to add a Xantrex C40 load controller to keep from overcharging the batteries. This device is a smart regulator with a battery equalize feature. Excess power is absorbed by a 12-volt heater element in the water heater. The C40 is connected to the house battery bank with a 50-amp circuit breaker.

We now have six years of operating experience on this configuration, and can finally say that we have a fully developed on-board power system, with power to spare.

Harry Hungate and his wife Jane completed this upgrade to their Corbin 39 cutter Cormorant while in New Zealand in 2004, and have since made the inevitable additions. They are now headed to the Canary Islands from Morocco.

View all posts by Harry Hungate