In the ever-evolving age of modern marine electronics, the humble VHF still stands out as one of the most simple and effective communication tools we have aboard. Whether using it to hail for a bridge opening, to call a buddy boat or, in a worse case scenario, to call for help, a fixed-mount or handheld VHF is an absolute necessity on a cruising sailboat.

THE BASICS
The basic principle of VHF radio communications is that, unlike an SSB, you can only send or receive messages on a line of sight signal. So, if you’re sitting in Road Harbour, Tortola, and are trying to get ahold of a friend over in Great Harbour, Jost Van Dyke, there is going to be a mountain blocking that signal. The same goes for distance, as the curvature of the earth will eventually impede your signal.

A VHF radio has an average range of five to 50 miles depending on your antenna height. In general, the higher the antenna you have, the greater distance you will be able to transmit and receive messages. It is a good idea, then, to mount your fixed-mount VHF’s antenna on top of your mast to give you the greatest possible range.

Every VHF, whether handheld or fixed-mount, will have the same 55 channels that you are able to listen to. But there are only 12 to 15 channels that recreational mariners are allowed to transmit on. The rest are reserved for emergency services, government use and commercial shipping. 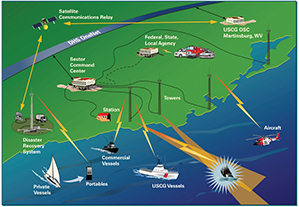 While VHF radios are helpful in a variety of non-emergency situations, at their core they are a life saving device. And the most fundamental safety feature on a VHF radio is your ability to call for help. Channel 16 has been set aside as the international hailing and distress channel and it is important for all crewmembers to know how to make a distress call. Besides being able to hail the Coast Guard on channel 16, there are a few other key safety components to a fixed-mount VHF.

In the past few years, the Coast Guard has set up a new coastal search and rescue system called Rescue 21, which effectively eliminated previous VHF coverage gaps. The system currently covers the east and west coasts of the U.S., the Great Lakes and a few major rivers. Rescue 21 is able to pick up on and triangulate distress signals up to 20 miles offshore with extreme accuracy. The only caveat to this system, though, is that it only works if your VHF is setup to optimize its Digital Selective Calling (DSC) capabilities.

Every new fixed-mount VHF sold in the U.S. today is equipped with DSC, yet this function seems to be largely unknown to most users.

By connecting your VHF to a GPS source and registering your unit to obtain a Maritime Mobile Service Identity (MMSI), you are able to send and receive emergency and non-emergency position updates. You could potentially use the non-emergency function in an instance where you are cruising in company with another boat and want them to know your exact location. Simply send them a message using DSC and they’ll instantly have your coordinates.

How it works in an emergency is that when you hit the DSC “DISTRESS” button on your VHF, it will send out a digital MAYDAY message on channel 70. That message will be sent to all other vessels in the area, as well as the Coast Guard. The information they receive will include your GPS coordinates, vessel ID number (MMSI) and message stating the nature of your emergency. The emergency messages you can send are sinking, undesignated, grounding, capsize, fire, flooding, adrift, abandoning, piracy and MOB. Once the following information has been transmitted, the radio will automatically switch itself to channel 16 so you can have a voice conversation with whomever may be around to provide assistance. 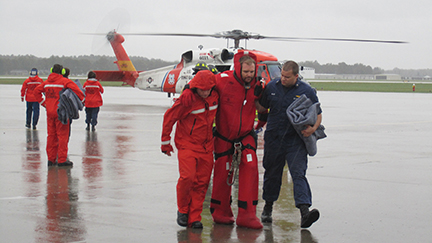 The major problem with the Rescue 21 system cited by the Coast Guard is that about 9 out of 10 VHF owners do not register their units in order to obtain an MMSI number and/or they aren’t properly connected to a GPS source. This is astonishing when you consider that by hooking your VHF to a GPS source, getting an MMSI number and knowing how to operate it will basically turn your radio into a shorter range EPIRB, perfect for inshore and coastal emergencies.
If you are in the market for a new fixed-mount VHF it is important to note here that the Standard Horizon Matrix AIS/GPS and Raymarine Ray260 AIS/N2K VHF radios are already equipped with GPS, so all you’d have to do is register for an MMSI number to make the unit compatible with Rescue 21.

Over the past few years, several VHF manufacturers have come out with Automatic Identification System (AIS) capable units. These fixed-mount radios have an AIS receiver to pick up AIS signals from other vessels, and a small LCD screen that allows you  to view any potential targets. This adds a whole new dimension to your VHF since you can monitor the speed and course of a vessel that might be on a collision course with you. Then, you can call them by name on the radio to make safe passing arrangements. 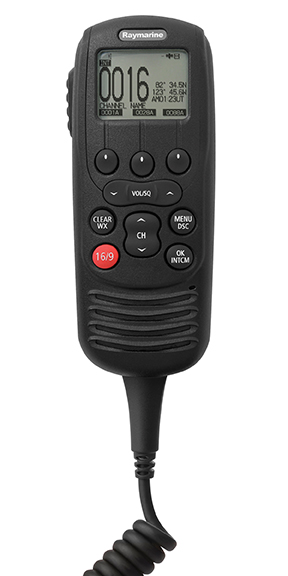 While having a fixed-mount VHF with an antenna mounted as high as possible is important, it is equally as important to have a handheld VHF as a backup. The limitations of a handheld are mostly going to center around the unit’s relatively short range, but they are great to take in the dinghy, to throw in a ditch bag, or to have in the cockpit if you don’t have a mic that connects to your fixed-mount VHF. And, if your house batteries go out, a handheld may be your last resort.

Standard Horizon, ICOM and West Marine all make handhelds with a built in GPS, which makes them DSC capable as well. This could be particularly useful if someone fell overboard with the radio, as they could push the DSC button and not only call the Coast Guard and other vessels in the area, but send their position to the fixed-mount VHF aboard the boat they just fell off.

Lastly, a VHF radio’s ability to provide you with up to date weather information is always important. Though we have phones, tablets and other devices to get weather information while sailing coastally, the marine weather radio may be the only thing you are able to get when out of cell range. Most, if not all, radios have a weather warning alert that will beep when an important weather message is being broadcast and 10 weather stations you can scan to get the latest coastal forecasts.