A couple takes their first sailboat from Argentina to Virginia, bringing their passion for fishing along for the ride  (published September 2012)

The first leg was fast and furious; the second was filled with drama and tension as Escapade fought upwind for 11 days; and the third was a majestic climax that the crew dubbed “the best sail ever.”

That’s the concise version of our 5,000 nautical mile journey from Buenos Aires, Argentina to Rodney Bay in St. Lucia—a month-long delivery trip up the South Atlantic that my husband Neil and I made on our new Antares 44i catamaran.

Sure, this was slightly out of our comfort zone, but we have always enjoyed activities that are a bit adventurous. Sea kayaking in the Sea of Cortez, trekking Peru’s Inca Trail to Machu Picchu, summiting Kilimanjaro, skiing double-diamond runs—this was yet another adventure for us. We are in the commercial real estate business, and these trips reinvigorate us and provide a great escape from work-related pressure.

While Neil had some experience crewing on a 19-day delivery across the Atlantic in 2008, I had never sailed more than nine hours at any given time, and always in fairly protected waters. And while we both have years of deep sea fishing experience in rough conditions, unlike any of our fishing trips, there wasn’t any going back to the dock at the end of the day. Although challenging, we enjoyed figuring out everything on the boat, setting our course, and generally fending for ourselves on the high seas.

SWITCHING TEAMS
Our journey actually began two years earlier when we decided to buy a liveaboard boat. We originally had our sights set on a trawler. We’ve owned powerboats for the past 24 years, ranging from a 20-foot Boston Whaler to a 33-foot Grady White that we used mostly in the Chesapeake Bay and Potomac River.

Our good friend Warren suggested that we consider a sailboat instead. He further suggested that Neil join him for a long distance passage to “test the waters.” Neil signed up to crew aboard a 50-foot catamaran for an Atlantic crossing. As soon as the engines were turned off and they were under full sail from the Canaries, Neil was hooked—and after a class in Tortola with the Offshore Sailing School, my reaction was the same.

The process of touring sailboats at numerous boat shows coupled with a great deal of research and sea trials lead us first to prefer catamarans, then to choose the Antares 44i. Antares Yachts exclusively builds the 44-foot cat in a dedicated facility near Buenos Aires, and the prospect of a delivery trip up the coast of South America appealed to us. The 44i is designed for blue water sailing, with liveability, comfort and safety at the forefront. All things considered, we found it superior in quality and liked its manageable size. We chose to have our boat fitted with Selden’s in-mast powered furling main. For a 44-foot catamaran and our particular needs, we concluded there was no close second.

AN UNWELCOME BUNKMATE
My original plan was to participate in only the second leg due to job commitments, but the opportunity to learn from our first leg delivery captain, Pikin, for a week was too good to pass up in spite of the language barrier. Pikin is a highly regarded Argentinian sailor whose expertise and knowledge of the South Atlantic and familiarity with our Antares made him indispensable.

With winds generally 20+ knots from astern, Escapade made excellent time to Santos, Brazil, completing the first leg in just seven days. This was Pikin’s 69th delivery from Buenos Aires to points north and he said it was one of the best (if not the best) in terms of favorable wind conditions. As expected, we learned a great deal from Pikin and it was sad to say goodbye. Joining us in Santos was Warren, and continuing on with us for the full journey was John, an experienced sailor from South Carolina.

Our good fortune turned on the second leg of the trip (1350 nm to Recife), when the wind changed directions to point right on our nose. There’s no way around it—11 days to windward, with high winds and waves, was very challenging and we were all feeling the same discomfort. But with our established routine of three two-hour watches and assigned tasks, the crew stoically endured the demanding trip and even found a little humor here and there.

One night, while Warren was reading with his head lamp in the forward cabin, a large flying fish flew through the open porthole and landed on the middle of his bed. What are the odds? He had no idea what happened, but in the fury that followed in the dark, he was able to catch the fish and toss it back out. We laughed for days about this.

NEW TRADITIONS
While the second leg was certainly dramatic, the trip wasn’t an endurance test the entire time. We stopped at two harbors—Cabo Frio and Maceio—before reaching Recife. Granted, these overnight diversions were fuel-driven, but the brief anchorages were a welcome relief. In Maceio, about 150 nm from Recife, our sightseeing trip was a search for the illusive diesel source. Apparently there is little cruiser activity in this large port city of one million people, as evidenced by the absence of a fuel dock. Access to the main road was through a very poor, eight-block shanty town, where we found a man with a flat bed cart to help facilitate the two one-mile hikes to the gas station with six jerry cans. To my surprise, people smiled at us as we walked by, no doubt curious or amused by our venture.

Following our landfall in Recife, I left Escapade with Neil, John and Warren for my flight home. My replacement was our good friend, Dietmar. After monohull sailing his entire life, Dietmar took special interest in his first catamaran experience. He would later conclude that the sailing speeds and overall comforts were excellent. The four guys departed the following day, turned the corner of South America and finally had winds in their favor. They spent the third leg of the journey sailing downwind with the trades. This particular leg included passing the powerful waters of the Amazon and crossing the equator.

It must have been really awesome to see the chart plotter read 00˚00.0. Neil and crew decided to forgo the traditional equatorial line-crossing pollywog/shellback ceremony and instead set a new tradition: they jumped in the water and swam across “the big black line in the middle of the ocean.” 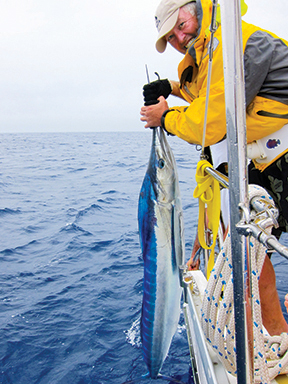 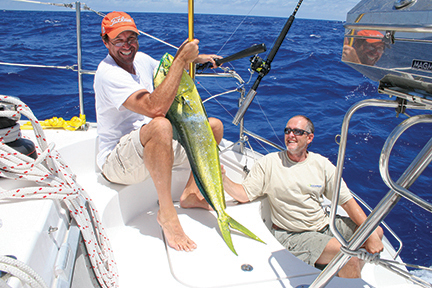 Throughout our delivery trip—and now, during most of our current time on Escapade—the boat sailed at the perfect speed for trolling with rod holders mounted on either side of the transom. Fishing has always been a passion of ours and continues to be a highlight while sailing.

“Let’s face it—for offshore fishing, it’s hard to beat a fly bridge, outriggers and the large cockpit associated with sport fishing boats. That said, we caught plenty of fish off the coast of Brazil, had mahi or tuna most nights, and seldom lost a fish, so we rate fishing on the Antares very good. With a 22-foot beam, we were able to run quite a wide spread of lures, and had plenty of room to land and filet our catch,” explains Neil.

So, what qualifies the third leg as “the best sail ever,” as dubbed by the crew? Well, for starters, 13 days of good fishing, consistent 15 to 18 knot winds, a following sea, flying the Parasailor for 36 hours continuous hours, and landing a white marlin under the shadow of the spinnaker.

Since taking delivery of Escapade, we have been focused on bringing her back to Virginia. We left her at Rodney Bay in St. Lucia in December after the first three delivery legs. We returned in April to move her to Tortola and again in May to participate in the Atlantic Cup Rally to Bermuda and on to Hampton.

Joining us on our fifth and final leg was sister ship Field Trip, which was launched only three months after Escapade. The competition was fun, and we might have given them a better run for their money if, on day four, the cry “fish on” hadn’t been shouted. In the middle of a squall, our reel started screaming and losing line. We were down to 10 wraps before we were able to heave-to. We fought a 70-pound white marlin for 25 minutes, watching more than 20 acrobatic jumps before releasing it at the transom steps.

Our cruising grounds for the next several years will primarily be the Caribbean, the Bahamas and the Chesapeake Bay, but as everyone knows, all boating plans are written in Jell-O. It’s probably more accurate to say that the rest of our sailing adventures have yet to be written.

When not seeking out double diamond runs in Aspen or marching up Peru’s Inca Trail to Machu Picchu, Shaun Sullivan divides her time between her hometown of Fredericksburg, VA and sailing with her husband Neil aboard their new Antares 44i catamaran. With the delivery trip from South America behind them, Shaun looks forward to exploring the Caribbean at a more leisurely pace.

View all posts by Shaun Sullivan