The 2013 Salty Dawg Rally, which sailed from Hampton, VA to the Bitter End Yacht Club (BEYC), Virgin Gorda, B.V.I, wrapped up in mid-November with the fleet arriving at their destinations safely and soundly. The SDR 2013 was the largest sailing rally ever to depart the East Coast with 116 boats registered. 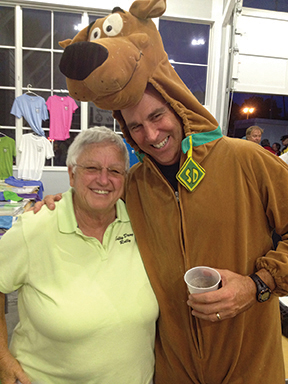 The majority of the fleet gathered at the BEYC on November 21st for the big-end-of-the-rally party with more than 150 Dawgs in attendance. Rally founders Bill and Linda Knowles hosted the party and invited all of the sailors to reflect on the rally and to offer comments in order to make the event even better next year.

With the SDR being run as a free, volunteer event, there were a lot of people to thank including weather router Chris Parker, Doo Dah net radio coordinators Dick and Judy Giddings, rally coordinator Tatja Hopman, Ron and LeAnn Marchman, and Joan Conover.

The rally started in Hampton, VA, Beaufort, NC and other ports with most boats staging out of the Blue Water Marina in Hampton. There, the marina had a pavilion (dubbed the Dawg House) that for a week became Salty Dawg headquarters where sailors could register, buy SDR hats and shirts and gather in the evenings for social events. 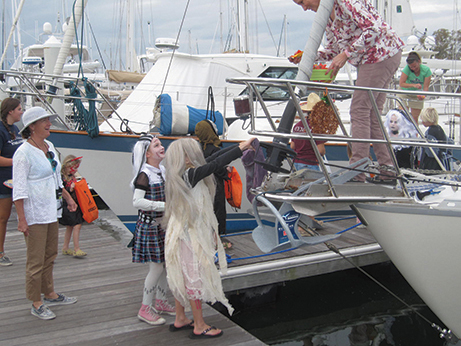 On Halloween, the Hampton Tourism and Convention Center sponsored a Dark ‘n’ Stormy Cocktail/Costume Party complete with Caribbean steel drum music. The children of the SDR got into costumes and trick or treated up and down the docks and then everyone gathered for the evening shindig. The following night there was a whole pig roast, with entertainment by Mike and Amy Aiken and painkillers were graciously provided by the skipper and crew of Rum Runner, a rally entrant. And, on November 2, the fleet gathered for the last time for the big send off dinner and raffle. Many valuable prizes had been supplied by rally sponsors and the winners went away happy.

The SDR does not have an official start because entrants are encouraged to set off on the passage to the B.V.I., or whatever destination they choose, when the skipper and crew deem it right. November 4 was a target date to leave but definitely not a start date. The rally provides free detailed weather forecasts and routing from Chris Parker, sponsored by Blue Water Sailing, so each skipper has the information he or she needs to decide when to leave.

Because the fall weather patterns were filled with advancing warm and cold fronts and low pressure systems, finding a good weather window in the first week of November proved difficult. Boats began departing on November 2 and continued to set off through November 8. Everyone knew the first few days at sea and crossing the Gulf Stream were going to be windy and bouncy, and they were not disappointed.

The bulk of the fleet was heading into the Gulf Stream when a front that was passing quickly stalled and intensified. For those in the stream, the wind howled and waves became large and confused. Over that night and the next day, four boats had rudder problems, two boats were dismasted and in the end, two boats (one with a lost rudder) had their crew air evacuated by the Coast Guard. The dismasted boats and one of the boats with steering issues made it back to the U.S. under their own power and the Coast Guard towed in two of the boats with rudder problems.

As the storm cleared, the rest of the fleet carried on in a seamanlike fashion, making repairs at sea where necessary. Several boats went to Bermuda for a rest and a few others headed for the Bahamas, Spanish Virgins and U.S. Virgins.

The 1300-mile passage took most of the boats about a week and boats started rolling into the Bitter End Yacht Club from November 9 onward. The BEYC generously provided free moorings and the use of their facilities for SDR boats at the end of the rally, which turned out to be a great place for the fleet to gather.

Many of the crews had tales to tell from their trip south including quite a few bumps and bruises from the first few days, to low fuel worries due to excess motoring, to a large number of fish caught and devoured. Tom Wiegand on S/V Want To, who won a handsome fishing pole and rig at the raffle in Hampton, caught a whopper wahoo that fed the crew for days. 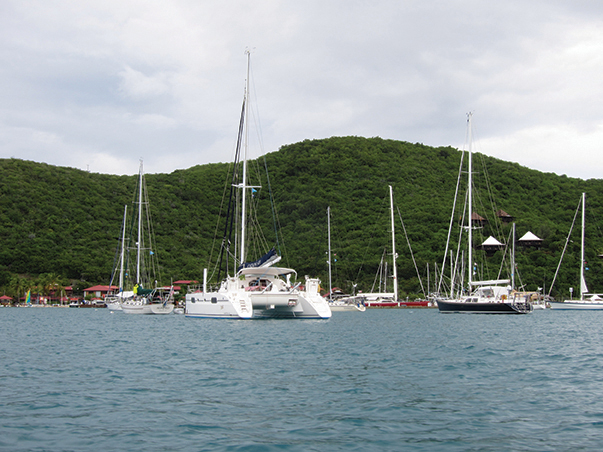 The attitude amongst the fleet was positive and supporting as crews tidied up their boats and made arrangements for repairs. The 2013 SDR burgees were flying all over Gorda Sound as the crews that had sailed in company spent time getting to know each other better as they were bound together by their shared adventures.

The Salty Dawg Rally is a free event open to experienced offshore sailors. The rally is a 501c3 non-profit organization based in Rhode Island. The association runs the fall Rally to the Caribbean, a spring rally from the Caribbean to the East Coast, a Fourth of July gam in Bristol, RI and offers seminars during the Annapolis Sail Boat show and in the days preceding the fall rally. For more information log on to www.saltydawgrally.org.