Seasickness is one of those things that sneaks up on the unprepared sailor and threatens to ruin an otherwise wonderful time on the water. While many address the problem by swallowing a pill or sticking a patch behind the ear, medications for seasickness often have wearisome and sometimes serious side effects. These drugs are not always effective either and should neither be considered the first nor only means of defense. Before gulping down whatever anybody suggests as a quick fix, it’s prudent to first understand the causes, symptoms and drug free options available.

CAUSES
The body perceives motion in three different ways. First, we have the balance nerve system, located within the inner ears, interpreting crucial information such as up and down, right and left, backwards and forwards, faster and slower. Second, the eyes are detecting motion. Third, specialized nerves called proprioceptors located in the muscles, ligaments and joints, are also simultaneously registering movement. When movement is relatively volatile, such as while sailing in heavy or confused seas, the signals the brain receives from these three sources can be confusing. The body quickly responds to the conflict between these senses as though poisoned and seasickness results. Unpleasant odors, sounds and other distractions are additionally overwhelming and cause symptoms to worsen. 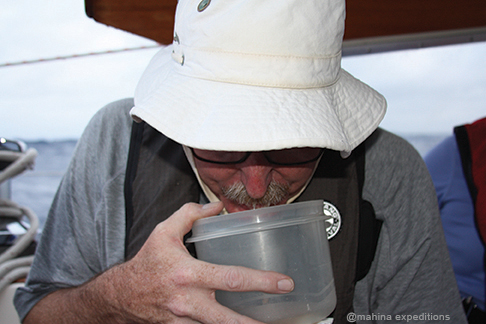 SYMPTOMS
Most people don’t recognize the symptoms of mild seasickness, which is identified by repeated yawning, sudden drowsiness and the victim becoming withdrawn or quiet. These early warning signs are rarely mentioned or written about anywhere, but it’s important to spot them and start addressing the problem right away while the condition is highly treatable. Without immediate attention, some people will find themselves stuck in this stage the entire time they are out on the water.

Moderate seasickness comes with feelings of lethargy, nausea and sometimes chills. The victim may lie down or request to lie down as the overwhelming sensations exhaust the mind and body. Color begins to drain from the face and extremities as the body sends blood to the core and vital organs. The victim may also experience cold sweats, light-headedness and perhaps flatulence. Various immediately “unnecessary” functions begin to shut down, including the digestive process. Now, the victim realizes they are sick, but it’s usually too late for a fast or full recovery. People sometimes remain stuck in this stage as well. Moderate seasickness is treatable to some extent, but heading for calmer water or returning the victim to the dock is preferable if symptoms persist.

Severe seasickness begins when the victim is about to vomit, which is a natural response to being totally overwhelmed. Immediately before throwing up, a telltale watery taste usually shows up in the mouth. The victim should know this means they are ready to throw up. Doing so is best accomplished in a bucket, over the leeward side, or somewhere down below so long as they return topside immediately afterwards. After throwing up, many people report feeling better. Color might return to their face and they might sit up straight and start talking again. The body has completed shutting down the digestive system, has expelled the contents of the stomach and perceived “poison,” and is often ready to take on the world again.

Dry heaving, a less common symptom, does not yield the same feelings of relief. People can get stuck in the severe stage of seasickness incapable of holding down water and are at risk of severe dehydration. Seasickness will not kill you, but serious enough dehydration can be deadly. A person stuck in this stage for too long should definitely be brought to protected waters or to shore.

TREATMENT & PREVENTION
There’s no reason for shame or embarrassment because of seasickness. It has nothing to do with how intelligent you are or how “strong” your stomach might be. Adaptation to various movements of the sea or any new motion is a gradual process that takes time. While repeated exposure to the same type of motion will usually condition the mind and body to manage that type of motion, most people would rather prevent feeling ill during this adaptive process. So what alternatives are there rather than resorting to medications? Natural remedies, seaworthy tricks and wristband devices offer several combinable choices.

NATURAL REMEDIES
A number of natural supplements and products based on them provide varying degrees of relief. Ginger has been used since ancient times to settle an upset stomach and is the most popular of these options. Digestion of the root works to a certain extent and even better when concentrated. Be warned, if you read the labels you’ll find most ginger ales and ginger snaps have an extremely low percentage of actual ginger in them. Try straight ginger slices, candied ginger, pickled ginger or ginger gum instead. Ginger pills can work, but don’t always settle in the stomach quite right. People often report an uncomfortable hollow awareness of their upper digestive tract after taking these capsules. Some prefer peppermint and other herbal remedies to ginger. Oils mixed into homeopathic products containing ginger, peppermint or other herbs, can help with absorption.

SEAWORTHY TRICKS
Pay attention to what you eat and drink 24 hours before going sailing. In particular, refrain from heavy meals, do not drink too much alcohol and try to get a good night’s sleep. These measures ensure the body is well rested and more capable of handling stresses from ocean movement. Once aboard, try not to worry about getting seasick, as worrying will actually contribute to the problem. People swear by all kinds of things that help them relax when they first get aboard. I once met a doctor who claimed a single beer does the trick for him. Try to calm down however you can. Next, remember to remain above deck with a clear view of the horizon. Doing so helps enormously by providing the eyes with a relative plane. Then refrain from any task that involves shifting attention away from the horizon, such as cooking, reading, making repairs underway, handling lines, rigging fishing gear and so on. Don’t hesitate to tell your crewmates when feeling seasick so they understand you’re not just being lazy.

When first starting to feel sick, take a proactive approach. Steering the vessel helps enormously because it forces you to focus more on the horizon and visually perceive the cause and effect of the wind and waves. Breath deeply to ensure the brain is adequately oxygenated. Remain clear of any unpleasant or distracting smells. And avoid going below deck unless doing so to go to sleep, which sometimes helps by eliminating movement perceived by the eyes and diminishing movement sensed by the body. Many go with the sleeping tactic as a last resort, but then completely miss out on the sailing experience.

For the vessel, eliminate unnecessary noises and distractions such as gear and supplies banging around or loud thumping music. Always remember to keep the mainsail centered even in little or no wind to minimize rocking from side to side. At anchor or on a mooring, deploy a stabilizing device such as a Flopper Stopper. For adventures lasting several days, some say it actually helps to spend the first night in a somewhat exposed anchorage and let the boat rock so people can adjust to the ocean movements during sleep. But this can be risky, so keep a calmer backup anchorage in mind and have a stabilizer rigged and ready to go in case somebody actually gets sick. 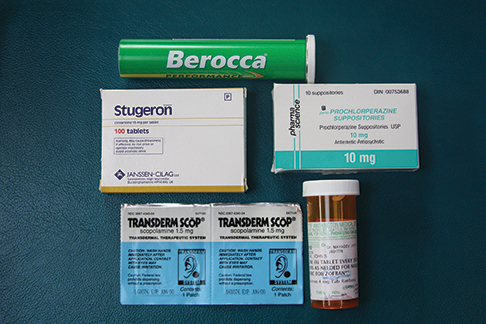 WRISTBAND DEVICES
Studies conducted at Humboldt State University have shown that applying pressure to an acupressure point on the underside of the wrist reduces the symptoms of mild motion sickness. Over the counter non-electrical wristband products that do so, such as Seaband and Magna Band, may prove beneficial enough for passengers on cruise ships, but these products are usually minimally effective aboard private yachts where movements are more extreme.

The FDA approved Relief Band is perhaps the most effective drug free product currently available for treating seasickness and is one of few remedies that will help once somebody is already moderately to severely seasick. This remarkable device uses two small electrodes to apply an electric pulse to the P6 acupressure point on the underside of the wrist. Doing so is theorized to regulate the signal between the balance nerve system and the nausea center in the brain through a process called neuromodulation. This product has also shown to restore the normal rhythm of the stomach muscles once disrupted. People usually start feeling better within a few minutes of strapping one of these on, but it requires exceptionally clean skin, conductivity gel, and sometimes some repositioning or tightening to work. When working correctly, a bizarre tingling sensation should be felt all the way through the palm and middle finger.

Relief Band Voyager is the model currently available without a prescription online or in stores such as West Marine. Relief Band also comes in three prescription strength versions each FDA approved for post-operative nausea, morning sickness or queasiness from chemotherapy. The device is not currently recommended for children, those allergic to latex, or for use anywhere on the body other than the wrist—especially on or near the chest for those with pacemakers. Skin irritation is possible, but usually goes away.

BEST PERSONALIZED SOLUTION
Here we have briefly reviewed a number of more popular drug free remedies for seasickness. Should additional help be needed, these solutions can be coupled with medication, such as prescription Scopolamine. Speak with your doctor before taking any drugs for seasickness and understand all the possible side effects and risks, even if only considering an over the counter product, such as Dramamine or Bonine. Know that medications for seasickness are dangerous for people with specific problems such as urinary trouble, glaucoma, difficulty breathing or dementia. Not all of them are safe for children or pregnant mothers either, and not all possible side effects are always listed on the labels.

Regardless of which approach is taken, seasickness is a conquerable discomfort, and discovering the best personal solution is a great excuse for getting out there on the water.

View all posts by Michael Kohl