“Make sure you’re back by next Thursday at 6:30 for the yacht club dinner!” my Grandma warned us as we left the house for the marina.

Later that night and out in the middle of Lake Michigan,  I was hungry and thinking about that dinner when I dropped into the dark cabin of our boat in search of nourishment. But when my shoe hit the cabin sole and instantly filled with water, my appetite vanished. Instead, my eyes bulged and my heart sank. Would we, too? In the moment, I didn’t even ask myself that question. Water was in the boat and all I could think about was stopping it.

My youngest brother, Matthew, and I had been sailing this boat—a Hunter 23 we kids had unofficially named The H-Two-Three—for years on small lakes in Iowa and on Lake Michigan. Our parents bought it for our family when I was eight and, although I had sailed many boats after, stepping aboard the Hunter was always familiar, like coming home. 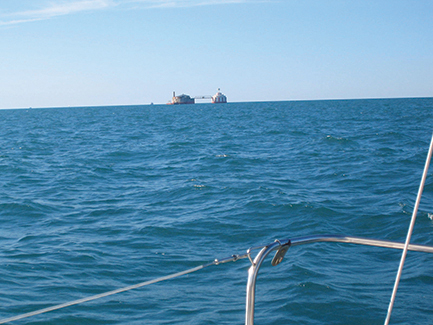 Comfortably broad reaching along in the warm afternoon sun, Matthew and I talked of obstacles to come when darkness fell. Our plan to sail from Pentwater, on Lake Michigan’s eastern shore, to the Manitou Islands over 100 miles to the north was based on youthful exuberance and a favorable forecast calling for 10 to 15 knots out of the south and west. “Great!” we thought with excitement,“it should be a nice night on the lake.”

Just before sunset, though, the wind shifted from the southwest to due north. With the shift came a strong breeze that whipped the waves of Lake Michigan into a confused, choppy mess. Clawing our way into the building seas was akin to sailing on a treadmill while getting hit in the face with water. We endured this fitness test for about an hour, but, we knew we couldn’t keep it up all night.

In a 23-foot boat that weighed 2,000 pounds, our decision was easy. I mentally broke the seal on Plan B and we turned to run off in the opposite direction, surfing down and through the growing swell instead of crashing into it. The Manitou Islands were out, Chicago was in.

I was at the helm as we started our run and Matthew set a preventer before settling back in the cockpit to take a fix and work up a new course. Soon, the waves were bigger and steeper and we found ourselves sailing too fast. At its peak, our Garmin handheld GPS read 13 knots. The little H-Two-Three hummed as we surfed and then plunged her bow into the next wave, sending water washing over the deck and into the cockpit. It was readily apparent that even though we were on our last reef in the main, we still needed to reduce sail to slow down and maintain control. Out came our storm jib as Matt clipped in and went to the foredeck to make the sail change.

With less canvas, the little boat was sailing slower but the steep seas made sleeping impossible and driving a Herculean task. Taking shifts at the tiller at least every 30 minutes, we had to use both arms to steer and our shoulders quickly tired. It was unbearable to be down below, so we both stayed in the cockpit steering and staring into the night. It would be a long one.

For the next few hours we took turns at the helm while the other tried to sleep on the opposite side of the small cockpit. It was during one of my short respites from steering that I ducked below and discovered water over the floor boards. Not good. Around me, gear was strewn about and provisions that had been stored under the table were floating. Fortunately, we were too.

I immediately grabbed for the handheld VHF as my brain kicked into gear, rapidly sprinting through a checklist of emergency procedures and places where water could possibly penetrate the hull. It wasn’t a long list, in this Spartan craft with no thru hulls or rudder post. The keel is bolted on and there is a ring in the bow. Those were the only two places I thought water could possibly intrude.

I exchanged the VHF in my hand for a flashlight, tore the cabin sole up and pawed through floating debris to inspect the keel bolts. I decided that if something was wrong with these, I was calling a May Day. Nothing. There was water covering them but I could tell no water was actually coming in. From there, I moved to the tiny V-berth. Flinging gear and cushions aside, I found the bow ring in the small locker at the foot of the bunk. Again, nothing.

Grabbing a bucket I started to bail. Throwing water into the cockpit at Matthew’s feet I could tell that I was more than keeping up with the flow of water. We weren’t actively sinking.

After taking a few minutes to think, I decided that water had to be coming in somewhere at the bow as we plunged forward into the swell. With that in mind I positioned myself so I could get a better look into the tiny locker at the foot of the V-berth. Sure enough, missed in my initial rush to check the bow ring, I noticed a drain hose for the anchor locker. As our bow submerged into the waves, water was being forced in through the drain and was spraying into the boat through a hairline split in the hose. When I wrapped my hand around the hose I could feel the water coming in, but could not see it as the crack was hidden from view. And, water was not continually leaking in. It was only intruding when there was enough pressure created to squeeze it through the fracture.

At this discovery, I breathed a massive sigh of relief and the initial shock of the moment dissipated. Finding the leak confirmed that, indeed, the boat wasn’t taking on water quickly. The water in the cabin had unknowingly built up during the hours we spent steering through the swell. I was also comforted to know that a fix would be relatively simple. As a temporary solution, I removed the hose and used the hose clamps and some flexible plastic to cover the holes. This worked well but we decided to make for the nearest harbor to get a replacement hose the next day in case the weather remained raucous.

OFF TO THE WINDY CITY 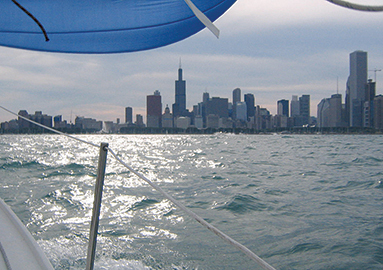 After making a more adequate repair and getting some well-earned rest we set off again for Chicago. This time the forecast held and we enjoyed one of the best nights of sailing either of us had ever experienced. Reaching down the coast of Michigan under a starry sky we made our turn west towards the city just before daybreak.

By mid-morning we spotted the Chicago skyline on the horizon. The city appeared as a mere string of dots at first, almost like a mirage. Soon after though, the wind failed and with that came the heat of the day. With our limp sails providing little protection from the August sun and Lake Michigan’s infamous black flies swarming, we fired up the outboard and charged towards the Windy City on a sheet of glass. The apparent wind created by the engine was much appreciated, but we took turns between steering and the shade of the small cabin below, hoping all along that as we neared land the wind would fill back in.

I had made many landfalls before this, but none of them compared to sailing into such a large city. It felt like we were sneaking up on a sleeping giant. Slowly growing as we made our way south, the city seemed to be so close, but was still miles away. As expected, our breeze returned and we sailed the last 12 miles under spinnaker. Cruising by the offshore water cribs and the lighthouse on the breakwater off Navy Pier, then into Monroe Harbor. The feeling was one of triumph and excitement. We had covered a generous stretch of fresh water on a small boat, and ended up in a big city. 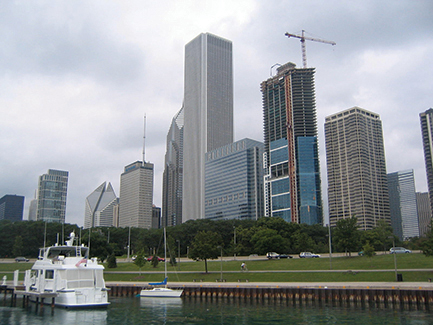 Without a dinghy and not wanting to rely on the harbor launch, we radioed the harbormaster in Monroe Harbor and asked if we could moor to the wall next the Chicago Yacht Club instead of staying out on a ball. This was not a problem and we tied up in the broad shadow cast by the Second City. Lake Michigan always made the H-Two-Three seem small, but the city made it feel tiny.

Having grown up in the Midwest, we had many friends living in Chicago who were happy we decided to stop in for a visit. Throughout the following days we took in a baseball game, went day sailing with our friends, had an impromptu after hours party with the night watchman at the CYC, and of course, feasted at the city’s wonderful restaurants.

When we finally pointed the H-Two-Three’s bow north again, our original plan of making it to the Manitou Islands didn’t even cross my mind. For Matthew and me, it really wasn’t about the destination. Chicago is always an amazing place to visit, but for us, it was about getting out for a cruising experience on our small boat. And what an experience it was.

The return trip to Pentwater was about as opposite of our first few days as we could get, which was fine by us. The wind was light, shifty and pretty much non-existent. We sailed some, but ended up using the engine most of the way back, and after hours of motoring we cleared the breakwater into Pentwater Lake.

It was a joyous feeling, not only because we could finally turn off the engine, but because I was hungry, it was 6:30 on Thursday night and Grandma was waiting at the yacht club.