Back in the Seventies, I had the good luck to be invited to join my old friend John Kiley aboard his Tahiti ketch Josepha for a cruise from Jamaica to Tahiti via the Panama Canal.  At 30 feet, the little ketch was a proper little ship. While there were a few larger yachts out cruising in the Pacific in those days, 30 feet was not considered small and there were plenty of cruisers out there in boats from 27 to 35 feet.

Today’s cruising fleet is made up of much larger boats, with 45 feet being about average, and there are many couples cruising in boats over 50 feet. There is a lot to be said for the comfort and speed of larger cruising boats. And with all of the modern sailing gear and electronics available to us, big boats are much easier to handle than they used to be. But they are also much more complicated and thus more prone to need maintenance and repairs than small, simpler boats of yore.

The term “pocket cruiser” was coined a generation ago to identify the many small but capable cruisers that were launched at the beginning of the fiberglass age of boat building. Boats like the Pearson Triton, Tartan 27 and Catalina 30 were all considered perfectly suitable boats for a family to cruise for a week or an entire summer.

That is how I started cruising. In the early Sixties, our family bought an early version of the Tartan 27 and we took it everywhere. We often piled five or six of us aboard for an MORC regatta or just three or four for a two-day passage from Cape Cod to the coast of Maine. We sailed in all weather conditions and never felt that the boat was too small.

The early fiberglass pocket cruisers were often designs based on hull shapes that had evolved from the days of wood construction so they had long overhangs, attached rudders and narrow beams. They were cramped and tended to heel over hard in a blow. If the leeward rail went under, you knew it was time to reef.

Today’s pocket cruisers make the best use of fiberglass technology and offer much beamier and voluminous hull shapes with longer and thus faster waterlines.  Boats like the Beneteau 31, Jeanneau 349 or the Catalina 315 have the space inside of 40 footers from the old days. And the modern designs sail so much better. 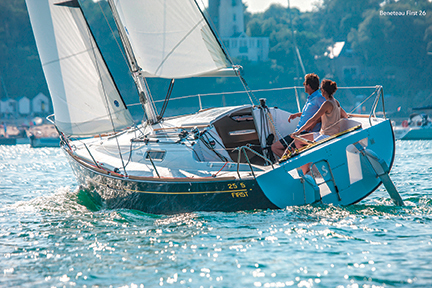 Today’s boats are designed to sail fairly upright and use beam and even chines to provide a lot of initial stability. Sailing flat is more comfortable for everyone onboard and is faster than pushing the boat too hard and burying the rail. With roller furling headsails now standard on all cruisers, and with in-mast mainsail furling available even in the smaller cruisers, adjusting the sail plan is dead simple and easily done from the cockpit.

There are a lot of good cruising boats in the pocket cruiser category between 25 and 35 feet. Beneteau offers their 31, 35 and the First 30. For entry level cruising or for those who just like and want a modest size cruiser, these designs will get you on the water and really cruising at an entry level price. 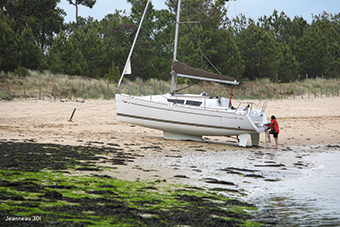 Beneteau’s sister company Jeanneau builds two designs in this category–the 33i and the 349–that are big little boats. They are beamy, have long waterlines and spacious interiors. The 349 that was introduced two years ago is a stellar performer under sail and has accommodations of a much larger boat.

Catalina’s 315 is a similar kind of pocket cruiser. Light and powered with an ample rig, the boats sail very well and is a real pleasure to handle.  Catalina continues to build “American Style” into their boats so you will find solid joinery below decks and a lot of traditional features that set them apart from the fleet.

Com-Pac yachts from Florida offers the very capable Com-Pac 27 that is a truly proper little yacht with ocean sailing capabilities. Very solidly built and with a lot of traditional touches, the 27 would make a safe and comfortable entry level cruiser for a young family or a fine last boat for a couple who are aging out of big boat sailing. 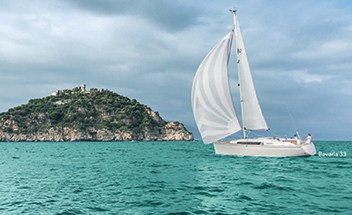 Germany has become a world leader in production boat building in the last decade and three companies–Hanse, Bavaria and Dehler–have small cruisers that are modern pocket cruisers.  The Dehler 29 is one of the most popular racer-cruisers in Europe with large well established fleets that get together to both race and cruise. The Dehler brand is not that well known in North America but the boats and the builder behind them are first class.
Hanse has quietly but steadily built a market for their boats in North America that now accounts for a significant slice of new boat sales. The Hanse 315 is a perfect little cruiser that is fast, easy to sail, roomy and affordable. It even has twin wheels.

Bavaria made a big push into the American market over the last five years and is still trying to build market share. Their 33-foot cruiser, designed by Farr, is a huge 33 footer with a lot of interior volume, a large cockpit and wide open side decks.  Bavaria builds a lot of value for the dollar into their boats. 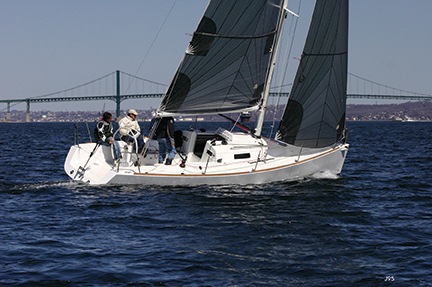 American builder J Boats offers several racer-cruiser designs that fit the pocket cruiser profile. The new J/97E that was introduced two years ago is a smart sailing, high quality boat that will acquit itself well on any race course and will double as a fun and comfortable cruising boat between regattas.

Seaward Yachts in Florida builds two smaller cruisers that are both lifting keel designs that prove great “thin water cruising.” The 26 and 32 both have very salty lines and traditional appeal. With the lifting keels and kick-up rudders, you can beach the boats for an afternoon of swimming and beachcombing. But, they are both capable blue water boats that can take you across the Gulf Stream from Florida to the Bahamas.

Last but not least in this category,  Tartan has three boats that will appeal to sailors who want that special combination of performance and cruising comfort in their under 35-foot cruiser. The Tartan 3400 is a beautiful, traditional cruiser that brings all that Tartan is famous for to the market for smaller cruisers. The 3400 sails sweetly and has very pleasant accommodations.

The Tartan 101 and 115 started life under the C&C brand, which is also owned by Tartan. When the company decided to split off the C&C brand, they renamed and re-engineered the two designs to meet traditional Tartan style and construction. Both boats are fast racer-cruisers that have done well in fleets all around America. But, they are also great little cruising boats that will be the right combination of qualities for couples or family who want the best of both worlds.

Since the early days of yachts there have been many great adventures and cruises in pocket cruisers so it is fair to say that it is not the size of your boat that matters, it is the size of your dreams. Here are some of my favorites. 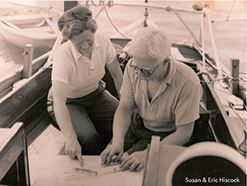 In the 1950, not long after the end of World War II, Susan and Eric Hiscock had a 30-footer built to a Laurent Giles design with a circumnavigation in mind. In 1952, they set off from England and spent three years sailing westabout via Panama, the Torez Strait and the Cape of Good Hope. Their voyage was a model of seamanship and prudent adventure and they laid a wake that many, many sailors would follow.

Also in the 50s, Englishman John Guzzwell succumbed to the call of the sea. With a modest budget, he built a 21-foot Laurent Giles design that he named Trekka and in this little boat he set off from his home in British Columbia around the world. In 1959, after many adventures and several years, he returned to B.C. as the youngest solo circumnavigator in the smallest vessel to sail around the world.

In the Sixties, a young Californian decided at the age of 16 that he thought it would be a good idea to sail his family’s 24-foot Lapworth sloop singlehanded to Hawaii. Along the way, he hatched the plan to sail his little boat around the world. Surprisingly, his parents went along with the plan and even more surprisingly the National Geographic agreed to take installments from him along the way.  In 1970, Graham retuned to California as the world’s most famous sailor and the one who instilled visions of world sailing in thousands of young dreamers who had followed his trip. 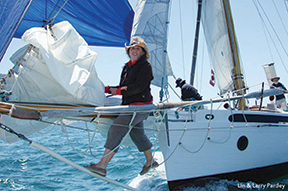 In the Seventies, Lin and Larry Pardey began their lifetime of seafaring aboard their 24 foot Lyle Hess designed Serrafyn. In this little cutter, they made epic voyage after epic voyage as they sailed eastabout around the world via Panama and Suez Canals. Their books and lectures inspired a whole generation of cruisers.

In the Eighties, young Tanya Aebi convinced her father that instead of attending university she would get a much better education if she sailed solo around the world. Her father agreed and took the tuition money he had saved and bought her a 26 foot fiberglass Folkboat design named Varuna. Learning as she went, Tanya spent two years cruising around the world in the classic trade-wind route via Panama and Suez. She returned to her home port in New York City to a hero’s welcome and her book, Maiden Voyage, remains a best seller 30 years later. 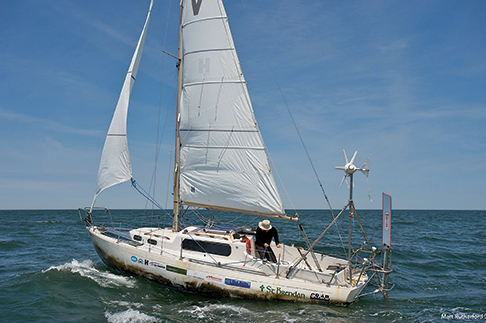 More recently, in 2011 and 2012, young Matt Rutherford sailed a borrowed, 27-foot Albin Vega sloop north from his home in Maryland to the Northwest Passage. His mission was to complete a non-stop circumnavigation of the America via the NW Passage and Cape Horn. The grueling and arduous adventures took him 10 months yet he prevailed. And along the way he raised $130,000 for a local Maryland charity.

Dreaming is a good thing. Following your dreams to sail away is even better. As Lin and Larry often say, “Go small and go now.”