Marine engines come with an alternator rated between 50 and 70 amps as standard equipment. This is spec’d to charge the starting battery and does double duty to also charge your house batteries. For most owners of coastal cruising boats, the standard alternator output is adequate. But, if you are living aboard and intend to make passages and cruise far and wide, then you will probably find that the meagre output from the standard alternator requires more motor time than you like to keep the batteries charged.

While an alternator is just one part of most cruiser’s energy system that includes solar and wind, shore power and possibly a generator, it is usually the first energy upgrade that we make to our boats. 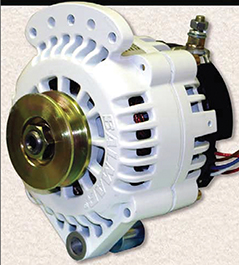 WHAT SIZE?
The first thing to know is that going bigger with an alternator upgrade is not always better. The size of the alternator that will be right for your boat depends on the size of the house battery bank and the type of batteries that you are using. Batteries have what is called an “acceptance rate” and this varies with the chemistry inside the battery.

Wet cell lead-acid batteries have an acceptance rate of 25 per cent. That means you should use a 100 amp alternator on a house bank that has a 400 amp-hour capacity. Increasing the size of the alternator will not give more charging power since the regulator will back off the charge rate to fit the acceptance rate.

Gel cells have to be charged at no higher voltage than 13.8 volts but have an acceptance rate of 30 percent. So, given a house bank with 400 amp-hours of capacity, the optimal alternator will generate 120 amps when fully charging. AGMs are even more efficient and accept a charge of 40 percent of the bank’s capacity or 160 amps. In both cases, upgrading to large, high output alternators will improve charging times and reduce engine time.

When you upgrade from the standard alternator to up to 100 amps you will be able to find an alternator that will fit right into the existing mounting brackets. These are “small case” alternators. When you start getting into high capacity alternators you move into the “large case” sizes. You can almost always find one that will fit the hard end of the engine mount but you will probably have to change the adjustable bracket on the other side of the mount. You may have to engage a machine shop to build a custom bracket if you can’t find one off the shelf.

Before you make a commitment to upgrade to a large case alternator, make sure there is room for it in the engine compartment. Often space is tight and the larger diameter of the case will not fit where the small case had been.

Part up an upgrade to a high output alternator involves upgrading the drive belt. In most cases, the standard belt will be a single V-belt that runs around a single pulley on the engine. For alternators above 100 amps, most companies recommend or even require you to install a twin belt system that will be strong enough to drive the alternator at maximum output. The alternator’s manufacturer or your dealer will specify the size of the new pulley and may be able to supply one to you. If not, your engine manufacturer, dealer or mechanic may be able to help you. Remember that twin belt pullies need to have matched belts that have be manufactured as a pair. You buy them as a pair, install them as a pair and replace them with a new pair.

Wide serpentine belts are becoming more popular as people install ever more powerful alternators to charge ever larger battery banks. If you have installed an 800 amp hour house bank with AGMs, you may want to upgrade to a large case 320 amp alternator that will need a serpentine belt, which in turn requires a new pulley on the engine to match.

On larger boats with big engine compartments, it is becoming more common to see an owner leave the standard alternator in place to charge the starting battery and install a new high output alternator on a separate bracket and pulley for charging the house bank.

REGULATORS
All alternators need a regulator to “regulate” the charge rate to match the bank’s acceptance rate and state of charge. When the alternator starts charging a bank that is 50 percent discharged, the regulator will put out the maximum amps that can be accepted. As the bank gets close to a full charge, the regulator will decrease the charge so the batteries don’t get overcharged and damaged or destroyed. Standard alternators have this “high-low” simple regulator built into them.

Battery manufacturers recommend that large banks with high output alternators use a smart regulator to create what is called the “ideal charging curve.” The devices, such as the Max Charge from Balmar, regulate the charge rate through a series of gradual decreases that have been programmed to meet the exact charging characteristics of the batteries on your boat whether they are wet cells, gel cells, AGMs or lithium ion.

A smart regulator will make your alternator more efficient, charge the battery bank faster and will extend the life of your batteries.

METERS & MONITORS
Most cruising boats will have a voltmeter on the house electrical panel of some sort. While a voltmeter gives you an idea of the state of the battery bank and the charge voltage, it really doesn’t tell you much about the batteries themselves. If you don’t have a voltmeter, they are inexpensive and easy to install so that would be a good place to start.

If you are going to the trouble and expense of upgrading your battery bank, alternator and regulator, it only makes sense to install a battery monitor that will tell you the battery bank’s state of charge in volts, show amps out, amps in and time to full discharge. The Link-Lite is a popular monitor used by many cruisers and this also will monitor the state of your starting battery. Viktron offers a very similar monitor that comes with a somewhat simpler wiring and installation system. Balmar’s Smartguage is a little more complicated to install and costs a bit more, but offers all the information you need on your battery banks in an attractive display.