While the rest of the world is worried about terrorism, it’s easy to feel safe from attacks when living aboard out at sea. Days go by without seeing another boat. The vast majority of cruisers never have to be concerned with safety; thousands of good-hearted people have wonderful years living aboard their sailboats and powerboats. But Christina “Tina” Curtin, who, along with her guy Mark Beiser, had a very different experience.

Bad guys exist everywhere—but inexpensive, simple preventative methods are all that are needed to keep liveaboards safe at sea.  Tina and Mark are seasoned cruisers, having lived aboard their 39-foot Westerly Sealord ketch Rainbow for years. They loved snorkeling, fishing and relaxing in beautiful anchorages throughout the Caribbean.

Then came the one fateful day a few years ago, which started with them exploring Clifton Harbor and Frigate Rock off Union Island, a nearly uninhabited part of the chain of islands that make up St. Vincent and the Grenadines. It was that evening when their idea of safety up-ended itself.

They had found a quiet anchorage and settled into dinner as the sun set. That’s when Tina saw what she thought was a towel flapping on deck. Turns out it wasn’t a towel. It was a 15-year-old boy, who boarded the vessel along with a 16-year-old boy. Another teenager was waiting in the dinghy they had rowed about a mile offshore to Rainbow, presumably with plans of a robbery.

When one of the boys tripped on the jib sheet, Tina poked her head up the hatch to check and she was attacked with a knife. Thankfully, Mark was there to defend her and fought back with the knife he used to fillet fish. He saved her life, forcing the pirates off the boat. From the incident, the couple learned valuable lessons they were quick to share.

“We feel like messengers for the cruising community, because of our strength,” Tina said. “It could have been an elderly couple or a family with small children that was attacked.” 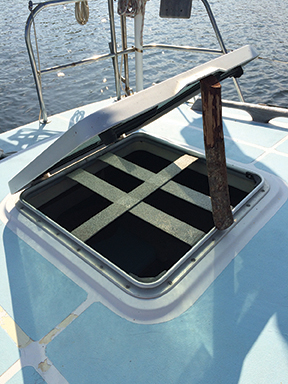 Somalia isn’t the only place where pirates exist. According to Noonsite.com, an online resource for reports on piracy against cruisers, more than 200 attacks were reported in the last five years throughout the Caribbean, Bahamas and Haiti. Many end more tragically than the attack on Rainbow, with some cruisers being held hostage or even killed.

The number of piracy and armed robbery instances against larger-scale commercial vessels is on the rise as well, with 246 incidents reported globally in 2015, according to the International Marine Bureau. That’s an average of one vessel being hijacked by pirates every day and a half, with Southeast Asia and the African coasts being the hot spots for danger.

While the U.S. Coast Guard and the International Maritime Organization implement best practice techniques for safety among commercial mariners, there is less formalized knowledge among cruisers. But, criminals do exist. Tina and Mark say it’s just smart boating to have simple safety mechanisms in place to reduce the risks. 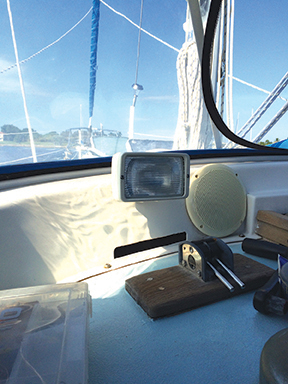 Just like buying provisions and back-up engine parts, cruisers and liveaboards should check a few important tasks off the to-do list. These safety tips include:

Turn on the lights: Install a simple halogen spotlight in the cockpit (facing stern) that is wired to be turned on from inside the boat. By turning off the inside lights, you’ll blind whomever is on deck. A strip of LED lights, specifically designed for marine purpose, is a good idea under the Bimini, too.

Know the area: Log on to the Caribbean Security and Safety Network and Noonsite to learn about piracy and other safety-related reports in your region.

Meet your neighbors: Ensure any boat anchored around you is on the same radio channel as you, in case either of you need emergency help. Leave the radio on, (it may be a little noisy, but you’ll be quieted by peace of mind) and keep an eye out for unsavory characters who may be in the area. Luckily, most boaters we have met cruising are quick to be friends.

Fit in as best you can: Flashing jewelry and money attracts attention in poor countries, no matter how far offshore you think you are anchored. Be smart about items left on deck and hoist the dinghy out of the water so it’s not an easy target. 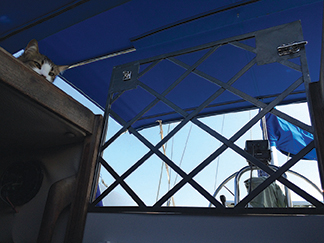 Consider a dog: The best deterrent by far is a loud canine companion. Of course, there are pros and cons to bringing a dog aboard while cruising. Mark and Tina cruised with three cats, Breeze, James and Manta, furry friends who helped soothe them after the incident.

Be prepared: Have a few cans of wasp spray located near the companionway and don’t be scared to fight if necessary. Be loud.

“Be ready. Don’t back away from the guy,” Mark said. “The objective is getting him off the boat.”

DON’T BE SCARED, BE SMART 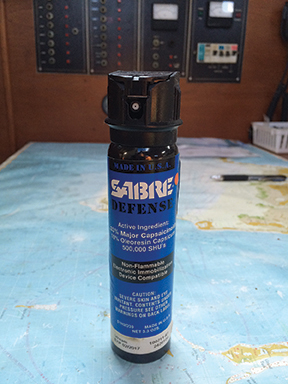 Prevention and awareness are the keys, Mark and Tina said, years after the attack. While guns remain a controversial topic in the cruising community, they recommend not carrying a firearm. It’s an added hassle when checking into most countries, and in their case, a gun really wouldn’t have done much good.

After the incident, the couple worked with the St. Vincent and the Grenadines’ Tourism Board to discuss ways of improving services and safety with local merchants and residents. Clearly, countries where these incidents occur want to improve safety for cruisers. But it’s unknown how much will change and how much can truly improve with the current economic realities. That’s why cruisers should not hesitate to improve the safety of their vessels.

“There’s no need to live in fear,” Tina said. “These types of attacks can be prevented. Be safe and keep sailing.”

View all posts by Suzanne Wentley