Cruising sailor, yacht broker, surveyor and author Todd Duff was there and so was the Amel 53 Ocean Life that he used to live aboard  (published Nov/Dec 2017)

BWS: When you knew Irma was going to hit Tortola, what precautions did you take for your boat, your house and yourselves?

Todd Duff: Up until just a day before the storm we all were led to believe that the eye was going to pass over Anegada Island, about 20 miles to the north of Tortola, and several of the computer models had the eye going even farther north. Having been through several hurricanes of up to Category 4 that had passed north or east of us, I expected winds of 100 to 120 knots, which is totally survivable. Indeed, right up until we lost internet, some of the weather websites were predicting that we would only receive winds of a little over a hundred knots. The most popular computer model, the GFS, was showing, right up until the final hours, that we were going to miss the eye.

Nevertheless, everyone here prepared as if we could get the worst case scenario. However, I knew in my heart of hearts that if this storm ramped up any more and did in fact nudge south, that the damage would be significant. Little did we know just how significant it would be! We tied our boat up with 15 one-inch dock lines and chafe gear and 13 fenders and had her centered in a slip near the bulkhead in what I considered to be the most protected spot in Nanny Cay Marina, six feet from the nearest dock and over eight feet from the closest neighbor.

What we didn’t count on was that all the docks in marina would break free and as the winds from what I now call “Super Hurricane Irma” topped 200 mph with recorded gusts to 256 and one unconfirmed report of a gust to 270, none of the docks or boats in the marina or boatyard were able to escape damage. It was during that initial eyewall passage that 40 or so boats broke the docks to windward of my boat and came down upon her, crushing and sinking her.

The evening before the storm, with all preparations in place aboard my boat Ocean Life, I went to a friend’s house directly across from Nanny Cay to help with final preparations there. 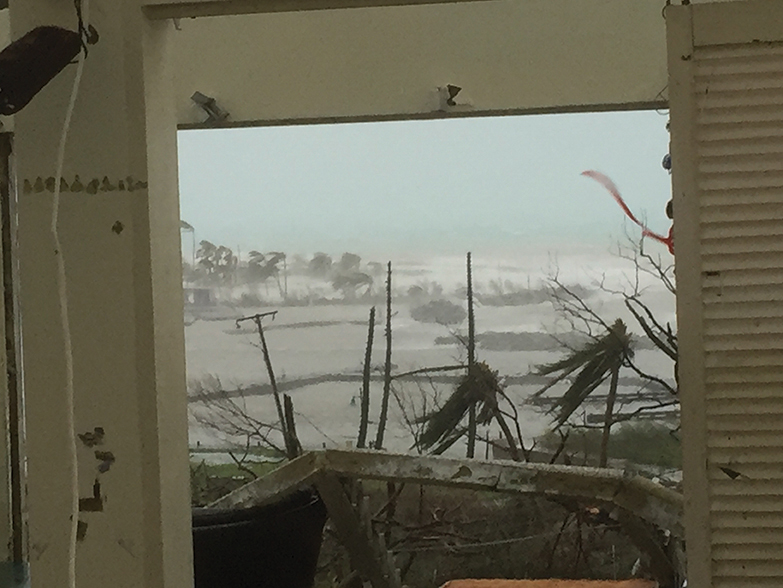 BWS:Where were you when Irma hit and what was it like to weather a Cat 5 hurricane?

TD: Despite storm shutters and boarded up windows and doors, the four of us ended up hiding under a steel staircase with couches and mattresses covering us as the roof exploded and windows were blown out. The entire six-unit concrete building we were in was shaking violently as if we were experiencing an earthquake and our ears repeatedly popped as the air pressure fluctuated wildly. We learned later that several tornadoes had formed in the second eyewall and one went right over our neighborhood, destroying my car, ripping up trees and tearing roofs away. As Super Hurricane Irma entered the BVI, she had intensified to be stronger than a Category 5 by at least a factor of one. The winds exceeded 185 mph for the entire passage of the eyewalls and the second eyewall was the worst as the mountains of the island had caused tornado-like eddies and williwaw-type effects that lifted 60-foot boats out of the water and threw them on roadways and on top of buildings. One of our friends reported seeing a glimpse of a catamaran powerboat over a hundred feet in the air in front of his house on the side of a nearby hill in West End, Tortola.

BWS: When Irma passed, what did you find in her wake?

TD: By 4:30 PM the fast-moving storm had calmed enough to allow us to go outside. With no roof and clearing skies we all walked down to the Nanny Cay Marina. I foolishly expected that my well secured boat would have survived, and I believe it would have had the docks not broken free. But, as we approached the marina and boatyard, we realized there was little hope for that.

Powerlines and trees were strewn across the roads and a 60-foot catamaran was upside down across the driveway at the marina. A few startled people wandered about looking as if they were in shock. The destruction all around us appeared as if a nuclear bomb had been set off. Not a single bit of green vegetation, save a few palm fronds, had survived. Entire hillsides were cleared of all greenery and only shattered stumps and branches were left. The few frame houses were erased with lumber strewn far up hillsides. Many houses had lost roofs and there were dozens of overturned cars. Mangled roofing material littered the hillsides and roads.

My friends and I carefully picked our way through all this and eventually made it to the marina basin only find my two masts sticking up out of the water. “Well, at least she kept her rig up” was the sardonic comment I apparently made. 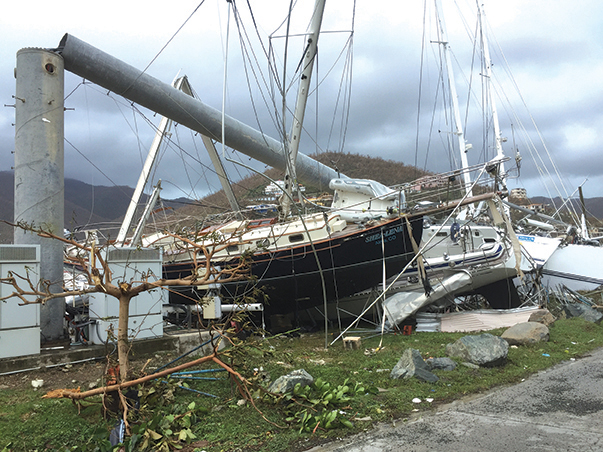 In the coming days many of us boaters and business people threw all our waking hours into trying to clean up and dig out, and to attempt to get a few of the systems and infrastructure on Nanny Cay up and running. The watermaker plant had been hit by something huge which had broken a lot of the piping and the electronics were all waterlogged. Missing doors and a damaged water outlet pumps meant there was no more water available and the 40,000-gallon reservoir was now standing empty.

I took on the job of getting that water plant back in operation and thankfully Nanny Cay’s two generators had survived, so within a couple of days electricity was restored to some sections of the boatyard and over the following week, with the help of a good friend who ran the main watermaker plant for Tortola, we got the watermaker running and power was restored to the hotel and condos. We then ran a water pipe out to the street so that the adjoining neighborhoods could get clean drinking water.
As part of the process of getting the watermaker plant back up and running, I had the opportunity to be one of the first to drive the length of Tortola as the only watermaker repair supplies were all the way across the island at the main watermaker plant, which was also at this point not operational. Driving across the island that second day after the storm took hours. The level of devastation was epic and passing through Road Town we saw the Scotia Bank completely ripped open and we observed looting taking place in many of the stores in the business district.

In the ensuing days in my capacity as a marine surveyor, I traveled to Virgin Gorda and was one of the first to get to West End and Trellis Bay. Everywhere I went the devastation was the same; nearly complete destruction was in plain view everywhere you could look.

BWS: What about your boat?

TD: Alas, my beautiful little Ocean Life sank and because of the huge number of boats sunk within the marina basin, piled up on the shores and crammed all around my boat, she was not raised for nearly a month. With raw sewage from the adjacent neighborhoods and muddy polluted runoff from the denuded hillsides filling Nanny Cay, by the time they finally did raise her, it was almost impossible to save anything. We lost virtually all our personal possessions and cruising momentos of over 30 years of living aboard and cruising. Although we had insurance on the boat, we had neglected to get personal effects coverage and in any case, you can’t replace memories. We were not alone either. Several other liveaboards lost their boats and are in the same predicament that we are in: Homeless and with essentially only the clothes on our backs. 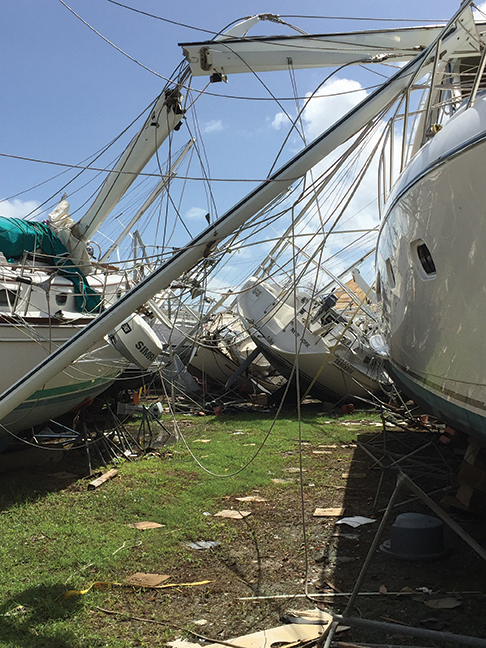 BWS: Where are you now and what is going on in the recovery process?

TD: Many expats and workers left the island after Irma and then two weeks later another category five storm came by.  Hurricane Maria passed about 35 miles south of us and so was not nearly as big a deal as Irma for us although Puerto Rico was not so lucky. We only experienced winds of about 120 mph and after what we had been subjected to with Irma, it was barely noticeable. Although a few additional boats were damaged, just a few days after Maria, and despite another outflow of people giving up and leaving the islands, those of us who stayed behind were working hard and the cleanup was back in full swing.

Although I was tempted to leave a few times, my passport had been aboard my boat and so was not recoverable. And because there was so much that needed to be done, I found and still find that assisting restoration efforts by moving things along towards a full recovery here has been a very fulfilling, if mentally and physically exhausting, undertaking.

Because I hold credentials as an accredited marine surveyor, and with by some estimates of over 700 damaged or destroyed boats here in the BVI, I quickly changed roles and have been busy surveying damaged boats for the various insurance companies since about a week after the first storm. As I write this, The Nanny Cay Marina basin has been largely cleared of wrecks and docks are beginning to go back in. 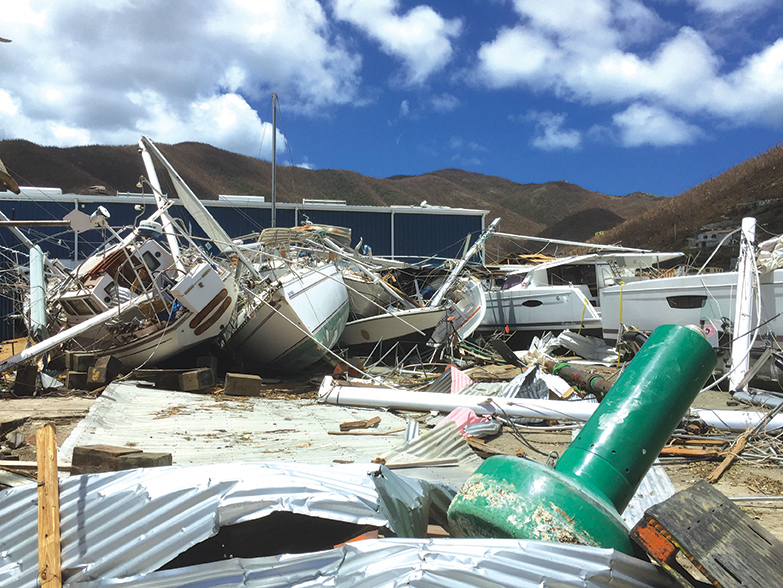 Power has been restored to some areas of the island and after over a month of having raw sewage seeping from the sewer systems in Road Town and East End, this problem appears to be well on its way to becoming just another bad memory.

BWS: As a yacht broker, what is the scene in the BVI for buying and selling boats?

TD: The British Virgin Islands, as well as some of the adjacent islands such as St Martin, St Barts, Anguilla and of course the USVI and Puerto Rico all received damage of epic proportions from these two devastating hurricanes and it will surely be some time before things return to anything like normal. That having been said, judging by the level of activity we have seen here in the BVI, I am fully confident that the yacht brokerage businesses here will survive and that the charter companies will bounce back as well. The BVI is, and will remain, the most active market for chartering, buying and selling boats in the Caribbean basin and not all the boats listed were destroyed. Surely business will be a bit slower in the coming months, but I have full expectations that the charter and related marine industries, including yacht sales, will all fully recover and for those bargain hunters out there, I am certain some really great deals will be found as the various companies and insurers release boats for sale and charter companies offer reduced rates to entice people to return to these special islands.