The field of marine electronics has been on a fast development curve over the last decade as many companies have been consolidated under a few big brands and then these large companies have innovated and competed for bigger pieces of the boating and sailing pie.

Plus, the exploding world of personal smart devices with user-friendly touchscreens has changed the way we think about our human-machine interface. We have come to expect our devices and electronics to function like our tablets and phones and to be completely intuitive to use. You don’t get much of an owner’s manual with your new iPad because you are expected to understand what it does and how it works. And, if you can’t, you can always search Google for an answer or advice.

New marine electronics, and the new generation of multifunction displays in particular, which were once quaintly called chartplotters, have benefited from this rapidly evolving technology. And cruising skippers and navigators are also benefiting from this new trend.

INTERCONNECTED SYSTEMS
Not long ago, marine electronics each stood alone and performed a relatively simple and direct function. The navigator was the link between them and the brain that evaluated and worked with the information, using it to make informed decisions on where and how to get there.

We mere humans have now been more or less removed from the equation and have been replaced by computers in black boxes that gather and crunch the data and spit it out in final form. The development of smart networks that link everything together means you can have exactly the data you want and need, whether it be calculating true wind speed and angle, or overlaying the radar image on a digital chart.

The interconnectedness doesn’t stop with navigation data, either. On a trip to the Caribbean a few years ago on a 54-footer, we had the latest e Series MFDs from Raymarine that could be and were connected to all of the sailing data sources and to the boat’s home entertainment system. That meant that the poor person who was alone on watch after dinner and in the cockpit could be part of the gang below as they watched a movie on the flat screen TV. The movie data ported directly into the Ray network and appeared on the MFD. We spent many happy evening watches with the chartplotting function, radar image, sailing data and a movie in little boxes on the same screen.

Wireless or Bluetooth technology is now available on several chartplotters that allow you to use apps on your phone or tablet to control the functions of the MFD. This means that you need only a single MFD at the chart table, but can use it in the cockpit or on the foredeck via your smart device. With waterproof cases now available for tablets, this wireless smart connectedness makes a lot of sense.

If there is a drawback to having everything integrated in one system, it lies in the possibility of having one unit fail and disabling the others in the chain. And while all companies are making NMEA 2000 compliant instruments, connecting units from different brands can be difficult, so the various brands more or less force you to stay within the family when adding new units to the network.

THE MFD
While the whole networking concept has made great strides forward, it is the multifunction display and control centers that bring the technology together and make it useable. Because the sailing piece of the marine market is small, most of the systems and MFDs out there are basically designed with powerboaters, fishermen and commercial users in mind.

The big new thing in the last couple of years is touchscreen technology that is coupled with dial controls so you can operate the MFD both ways. With a touchscreen, you can move from function to function using drop down menus with a swipe of your finger and a tap of your finger tip. Or, if it is too bouncy aboard to be accurate with touch technology, the dial controller gives you a positive thing to hold and manipulate.

All of the modern MFDs have developed icon systems so you can choose functions by tapping or scrolling on the icon you want. It’s very similar to tablet functionality.

In the chartplotting function of these new MFDs, you have dozens of variables you can control and manipulate to get the picture and perspective you want. You can dictate the level of data on the chart from plain to very detailed and can orient the chart with “north up” or “course up.”  You can even add current data to the chart so you can see set and drift. The brightness of the screen can also be changed to suit the lighting day or night, and much more.

By using the screen splitter function, you can set the MFD up to display what you need to see in order to navigate. On most of the units you can have several boxes of unique input data on display at any given moment. For pure coastal navigation you might choose to have your chart and course in one box, your depth and speed in their own boxes and if it is foggy or dark, then radar in another box or overlaid onto the chart.

Sailing to waypoints is a basic navigational function of a chartplotter and an MFD. In the latest versions, setting up single waypoints or building longer more complex routes has never been easier. With Bluetooth functionality, you can actually build routes on your laptop or tablet at home and then transfer them to the MFD once you are back on the boat. The Man Overboard (MOB) button on each MFD allows you to immediately place a waypoint at a spot very near where a crewmember has fallen off the boat.

Sirius XM radio offers a weather function via a satellite link on a subscription basis that can be accessed and displayed on most of the top MFDs. You’ll need a separate antenna for this. With the data you download, you can read detailed weather maps for your area, get sea buoy data, look at wind strength and direction arrows and much more, all on the MFD.

One of the best safety features to come along in many years is the Automated Identification System (AIS), which turns your MFD into a real life saver. AIS uses VHF frequencies to send identifying signals to boats in your area that tells them you are there, your course and speed. The AIS signals from boats and ships around you appear as small icons that you can scroll over to see who they are and where they are heading. If you are on a collision course, the AIS function will beep an alarm to let you know.

Modern MFDs are relatively easy to learn and use and they can occupy a lot of time in the cockpit as you sail along. There are so many features to check and adjust that allow you to “fly on instruments.” You might begin to feel more like a pilot than a skipper. 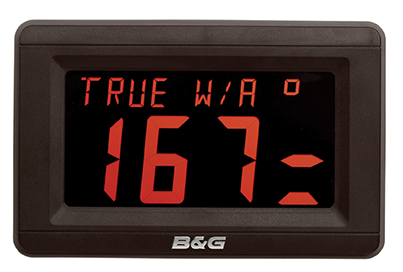 Because MFDs are primarily designed for powerboats, fishermen and commercial vessels, and not for sailors, most of the units on the market do not have many “sail only” features.

One feature most of the brands do offer is the wind-vane function that uses the angle of the apparent wind as measured at the masthead instead of the compass as a reference or bearing for the autopilot to steer. By holding an apparent wind angle course, you can set the sails for optimum performance and leave the helming to the autopilot that will maintain that angle even when the wind shifts a little, or even a lot. On passage and away from land, this is a very useful function that frees you up for other chores on the boat.

Unlike the rest of the major brands, Brookes & Gatehouse has made the decision to be the sailing instrument and MFD company for the sailing market. For decades B&G has been a premium sailing brand that has been used in competition offshore and around the buoys. An early adopter of using a boat’s polar curves to build target data and optimum sailing angles into their sailing instruments, the company has a lot of knowledge about what works best in crunching the data aboard sailboats.

Last year B&G launched the new Zeus Touch MFD and the H500 sailing instruments and autopilot that have a number of sail specific functions that will allow you to sail faster and find the shortest course to your destination. Using simple-to-understand graphics the Zeus will calculate your distance to a layline and best tack or angle to sail, will record minor wind shifts and build trend graphs, and will calculate set and drift so you can choose the ideal sailing angle and shortest course to your destination.

The sailing functions in the Zeus system sound as though they are for racers, but they certainly will be a great aid for anyone who wants to sail better and faster.
MFD Companies