No longer sails only for racers, modern membrane, laminated sails will make your cruising boat sail a lot better and will hold their shape longer than conventional sails  (published April 2018)

Have you ever sailed alongside an old classic and been amazed by how fast the boat was going? The yacht has teak decks, a graceful bow and a pleasing, gently sloping transom, clearly a classic but sailing much faster than one might expect from an old yacht. Well it just may be that you are not seeing the entire picture.

Many modern classics are designed to look traditional but some of them have carbon hulls and below the waterline there is a fin keel and spade rudder, not a full-length keel from decades ago. You look at the teak mast and what you can’t see is that it’s in fact a carbon mast with a teak veneer. 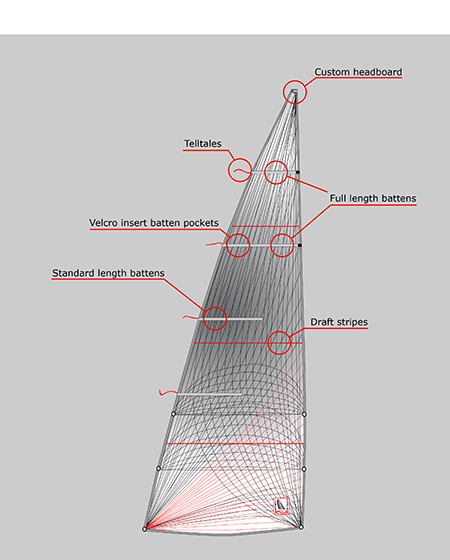 And what of the sails? They look like classic sails but sandwiched between taffetas are highly engineered membrane sails built from an exotic low-stretch, high-modulus fiber. It’s no wonder the boat is moving along at a good clip. This begs the question; are membrane sails good for cruisers and what other options are there?

Let’s start by looking at the reason someone might want a membrane sail. It’s certainly true that Dacron sails have been around for decades and have served the cruising community well, but Dacron sails are heavy and heavy sails are more difficult to manage and trim. Light sails are much easier to handle and definitely easier to set and trim.

There is another reason for wanting to save weight in your sails. Weight, especially weight aloft, adds to the heeling and pitching moment of the boat. Excessive pitching is fatiguing on the crew, especially on a long passage. Imagine going offshore with a few sacks of sand strapped to the top of your mast.

I like to say that you should measure the life of a sail by how long it holds its shape and not by how long it holds together. With that in mind, an investment in fabric and engineering goes a long way toward ending up with sails that still have a beautiful shape 10 years down the road. The old adage, “you get what you pay for” really does apply to sails and that’s the reason many sailors, not only those whose bent is racing, but cruisers as well, are turning to sails that are better engineered.

Let’s look at cross-cut Dacron sails. All sails are engineered to handle the highest load that the sail might encounter and that’s the load up the leech and along the foot. With Dacron sails, the sail designer specs fabric strong enough to handle the leech load, but with a cross-cut sail that same weight fabric is in the body of the sail and along the luff where there is considerably less load. In other words, it’s pretty inefficiently engineered. Radial sails are much better. You can use a heavier fabric in the high load area and a lighter fabric in the areas of the sail where there is less load.
Most Dacron fabrics are woven with the strength in the fill direction, in other words across the fabric. That way when the sail is built the loads are taken by the stronger fill fibers. There are some Dacrons that can be used to build radial sails but a laminate may be a better choice for radial sails.
Most laminated fabrics have Mylar as the base layer and Mylar, being extruded rather than woven, is there to support any off-thread-line (bias) stretch. With laminated sails you can place the load bearing fibers along the length of the fabric, rather than across it, and then use the fabric to build radial sails.

Membrane sails are the most precisely engineered of all sails. Each individual yarn is laid directly along the anticipated load paths which is a very efficient way of building a sail. Because of the precision with which the yarns are incorporated into the sail, you end up with each individual yarn being used to its full potential, which means that you can use fewer yarns to build the sail, and fewer yarns means a lighter sail.

You can also have a number of different types of yarns in each sail. For example, you might use carbon fibers, which in terms of strength and stretch resistance is one of the best but also one of the most expensive, to handle the highest loads up the leech and along the foot of the sail, and use Twaron, which is cheaper but not as efficient, in the body of the sail. 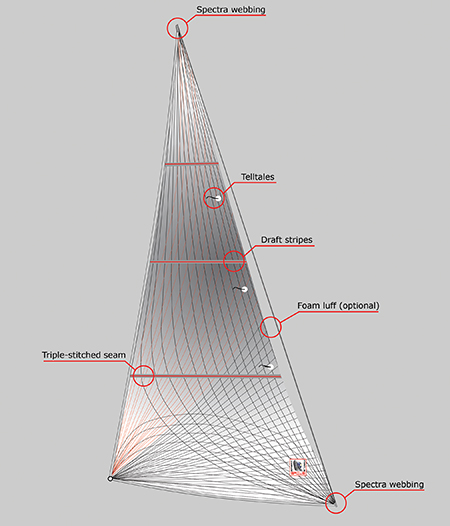 In case you are not familiar with Twaron, it’s an excellent fiber that has replaced Kevlar in sails. It is very similar to Kevlar in terms of strength and stretch resistance but without the UV and flex issues that plagued Kevlar sails in the past. It’s a much more suitable fiber for performance sails.
Other exotic fibers that are used in sailmaking are Vectran, Spectra or by its other name Dyneema, Tetraneema and Technora. Indeed, for smaller boats up to around 35-feet, Polyester can be used to build membrane sails. Each of these fibers have their own strengths and weaknesses, but the key attributes that fabric makers, and by extension sailmakers are looking for in a fiber are all the same.

Low stretch is very important, good flex, meaning that the sail can be folded and flogged a lot without the fibers breaking is also important. The last attribute is its resistance to UV degradation. A fiber like Vectran is extremely low stretch and can be flexed a lot without degradation, but show it some sunshine and it immediately starts to break down. When a sailmaker uses Vectran in a sail, the UV sensitive yarns are encapsulated between UV treated taffetas. This way the full benefit of Vectran’s properties as a fiber for sailmaking can be exploited, and it’s one weakness – UV degradation – is mitigated by the taffetas.

Membrane sails, or the idea of an “air frame” to form the basic structure of a sail was first patented by sailmaker Peter Conrad and after much court wrangling North Sails started to manufacture a similar product on a mold. They were very expensive to build and for many years were mostly used for racing sails.

But many sailmakers now either own a stringing machine that is used to lay the fibers onto a Mylar substrate, or they have access to one and as a result the cost has come down quite considerably. In fact, in many cases they are cheaper than paneled sails. The process of manufacturing a membrane sail involves making the fabric and the sail at the same time. For paneled sails, the fabric is made by a fabric maker, shipped to the sailmaker, and then the sailmaker uses that fabric to make the sails. That’s a lot of steps and each one pushes the cost of the sail higher.

Some cruisers simply don’t want membrane sails and that’s understandable. There is always the underlying fear of a sail delaminating, or over time having mildew build up between the layers. Both of these are reasonable fears but in recent years they have been pretty well unsubstantiated. When membrane sails are made, they are vacuum bagged under very high pressure and this pressure, combined with advances in adhesive technology, have resulted in little or no delamination.

Most membrane sails and laminates, especially those for cruisers, have light taffetas that have been treated with anti-mildew and anti-UV additives. The taffetas protect the load bearing yarns and provide a little grunt as well as chafe protection. 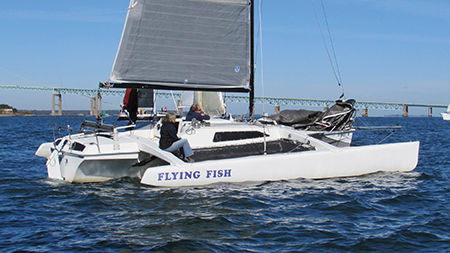 It’s not only cruisers who want to have nothing to do with laminates. In 2006, the British sailor Sir Robin Knox Johnston wanted to enter his own race, the Velux Five Oceans Race, a single-handed around-the-world race. Robin, being a tad old school, saw the benefits of radial sails but was not interested in anything other than a woven fabric.

Working in conjunction with Challenge Sailcloth, they developed a woven fabric that had the strength and stretch resistance running the length of the sailcloth, rather than across it. The crimp that occurs when any fabric is woven is taken by the fill fibers which run across the fabric, rather than the warp fibers and therefore the warp fibers do not elongate when they come under load. With the warp drive fabric they were able to make radial sails and by all accounts the sails performed flawlessly for the entire race.

Another noticeable advantage to high tech sails is the ability to hold their shape through a much broader wind range, meaning that you will end up reefing less often and can carry a headsail through a wider range of wind conditions. In addition, there will be a noticeable increase in boat speed, which in turn reduces the amount of time spent at sea.

The sails will also be easier to handle than conventional Dacron sails. It will be easier to furl and unfurl a headsail as well as to take in and shake out a reef. The sails are easy to manage when hoisting them for the first time and they take up less room when stowed below.

High tech sails may not be for everyone but if your boat is approaching 45-feet or above it’s definitely worth considering them. The bigger the boat, the bigger the loads and choosing sails that are better engineered quickly starts to make sense.

Many cruisers have shied away from high tech sails because they either thought that only racers want that kind of product, or that they were concerned that the price might be too high. Neither is true anymore and therefore high-tech sails are definitely worth considering. Don’t forget that it’s how long the sail has a decent shape that counts, not just how long it holds together.

Sailmaker, author and raconteur, Brian Hancock has raced around the world and sailed just about everywhere. He owns Great Circle Sails, which caters to sailors of all kinds who want to sail higher, faster and longer. He is based in Marblehead, MA.