It has often been said that the devil is in the details. It’s those same details that will decide victory on the racecourse or pleasure throughout a long distance passage.  (published May 2015)

Whether you are entering a competition merely to be among those who race or are actually out there focused on winning, the difference is determined by the degree of preparation. Luck certainly plays its games as well, but preparation seems to hold the ugly side of luck at bay more often than not. Both on deck and in the nav station, an acute attention to detail will tilt the odds in your favor, regardless of whether the nature of the passage is racing or cruising.

Preparation can be a daunting task especially if you’re not familiar with the process. Long ago I heard it said that the sea will find any weakness. I’ve also heard it said that if I continue sailing long enough and cover enough miles, everything that can go wrong, will go wrong. Good preparation is an effort to disprove that last statement.

The conception of that rebirth begins with the creation of the job lists. The more complete and well organized those lists, the more complete and well organized the preparation can be. As one prepares a boat, the first task is to formulate the “ideal” and most complete list of tasks that one would like to accomplish on the vessel prior to her first use. Later, additional tasks may occur to someone, but if the job list is kept on file in a computer, the list can be easily modified, and the most complete version can be saved for future reference. The list should not only be a listing of tasks or tools, but it should also have space reserved for noting who is responsible for the completion of the task and a space for noting the date on which that task has been completed.

To make it easier to formulate the list as well as to delegate various areas of responsibility, the general master work list can be broken down into specific areas. These areas should include: Navigation, Electrical, Mechanical, Structural, Rigging, Sails, Winches/Deck Hardware, Safety, Provisions, Miscellaneous and Tool Inventory. Naturally, different vessels will have different requirements. Powerboat owners wouldn’t have much use for a job list that included sail repairs, but they might feel the need to break down the Mechanical list into smaller categories that included Refrigeration, Main Engine, Generator, etc.

Similarly, some racing boat owners might want to break down the Tool Inventory list into: “Tools Onboard During Races”, “Tools Onboard For Casual Cruising and General Maintenance” and “Tools In The Container/Van”.
The initial list should be as detailed as possible. By making a detailed list, it will be easier to determine whether something has been accomplished, and fewer tasks will be overlooked. By creating and keeping a “master list” that includes most of the jobs you would ever want to do, next year’s tasks of decommissioning and recommissioning will be greatly simplified.  As new jobs occur to you, add them to the master. A great help might be to go through the list with the crew and get their assistance in creating the original list. Determine who is responsible for the completion of a particular task or area of tasks and get their estimate of a completion date.

It’s best to be clear on the billing procedures of the yard or contractors prior to commencing the work. What is the hourly rate they charge? Is state tax applied to the labor bill as well as to the material bill? How does that compare with other yards in other states? Would a different yard be more suitable? Is the labor rate the same for all of the workers? The mechanic as well as the rigger; the head of the department as well as the apprentice? Are you going to be charged to discuss the work as well as to have it performed? Is there a yard surcharge added to bills presented by outside contractors? Does the yard get paid a fee by outside contractors for recommendations they make? The consumer ultimately pays that fee! Is the yard willing to negotiate a lower hourly rate during their slow periods?

Any owner will only want to deal with a reputable yard, performing their tasks in a businesslike manner. And, as such, the yard is expected to make a reasonable profit on the work they undertake. But it’s up to the owner or his representative to make informed comparisons prior to making a commitment to commence the work, and the information should be put in writing by the yard prior to commitment as well. The relationship between the vessel’s owner and the yard need not and should not be confrontational; both have the same goal of improving the vessel throughout its preparation. But a clear understanding of duties and obligations put in writing by both sides will go a long way in avoiding misunderstandings that are in no one’s best interests. It should also be understood that changes in the list of jobs to be performed by the yard will most probably also imply a change to the charges. 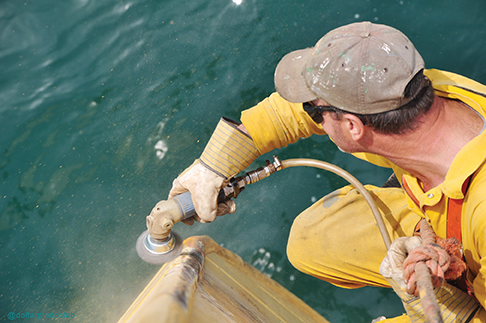 Whether the jobs are to be performed by members of the crew, the yard or outside contractors, proper scheduling and adequate lead-time needs to be allocated for ordering parts and completing pivotal jobs. If it’s desired to have your boat ready by mid-May and someone begins to check out the prop after the first week in May to see if it needs to be replaced or reconditioned, discovering a problem could easily throw the schedule back several weeks.

Well-organized and executed preparation is a “thing” of beauty. It is a choreography of people and tasks. At the end of it the boat is the winner, and the people involved can be justly proud.  They’re now ready to thrash the competition or enjoy this year’s sunsets, and they’re safely prepared for this year’s inevitable storms on the boat you may have only recently purchased.