Lightning, electrical failure, computer crashes all happen on a whim of the gods. Safety and lives may hang in the balance and navigation’s basics can tilt the odds in your favor  (published July 2013)

She was a tired but still-fast sloop out of the Med. Charging along through the trade wind night, the Canary Islands had long ago vanished behind the transom and Antigua was days ahead on the bow. Clouds had built throughout the early part of the night, and lightning sparkled in the distant sky. As the 0200 watch took the helm and settled into their routine, it seemed like it would be a night much like any other. It wasn’t to be. A call at 0300 summoned me back to the deck. St. Elmo’s fire lit the upper third of the standing rigging. Electricity hung heavy in the night air. Suddenly there was a flash. 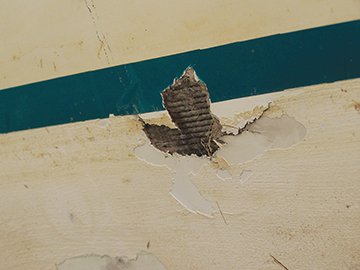 Lightning strikes boats in a wide variety of places and causes an equally wide variety of damage. Strikes hit boats on inland lakes, in marinas, while coastal cruising or racing and in the middle of the ocean. Through-hulls can be blown out. Pinholes can perforate the hull, or instruments can be selectively or collectively rendered useless. In short, it can be a mess!

The first priorities, as in any emergency, are damage assessment and control.  Make sure the crew are uninjured or cared for, the hull is watertight, and the rig still intact. Critical situations are addressed first to limit further problems. As those immediate, high priority emergencies are met, more time will be devoted to understanding the extent and nature of the problems in navigation. In offshore navigation, it may well be time to turn back to basics as electronic wind instruments, position fixing devices, computers, speedo’s, radar, and depth sounders may all be useless. 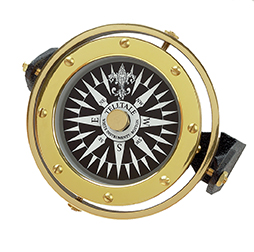 Compasses —even deck mounted or binnacle compasses—may be re-magnetized, leading to erroneous heading information. If you’re going to arrive at your destination, you may very well need to reach into that bag of navigational tricks to improvise.

Computers aboard vessels have provided terrific benefits to navigators and communications have been enhanced. But written logs are still an important aspect of proper navigation.  You need to know where you are and where you’ve been both with and without electronics. Similarly, paper charts, light lists, and nautical almanacs may also prove to be critically important.  Even while offshore, the prudent navigator makes periodic written log entries, noting time, position, speed, heading, wind and weather conditions and any other items of interest.

With a known position, the navigator must always be prepared to determine a course to get the crew and vessel safely to port. If the electronic compasses are disabled and the deck compasses re-magnetized, he may be forced to rely on a hand-bearing compass or other means of determining direction. You won’t know whether or not the lightning has affected your compass until you check it against known landmarks, navigational aids or a naturally occurring means of direction finding.  Among the few naturally occurring direction indicators are the North Star (Polaris), Orion’s Belt and the sun. When lightning seems like a possibility, not only should you disconnect some of your positioning devices and stow hand-bearing compasses away from electrically conducive objects or wiring, you should also make note of wave directions in the log; they may provide a short-term reference for direction later in an extreme situation.

As the sky clears or gaps appear in the clouds, you can check your deck compasses to determine if they have been re-magnetized. During the night, you can head your vessel towards Polaris, noting the compass bearing to the star. Allowing correctly for magnetic variation, are you pointed toward true north?  If not, how far out are the compasses?
If locating the North Star is a problem or as an additional check, use Orion’s Belt when it is low enough on the horizon. The uppermost star in the belt rises almost exactly in the east and sets almost exactly due west.

Once you know that you’re underway in the correct direction, your DR position will depend on how accurately you keep track of your speed. Only decades ago, boats often carried taffrail logs to determine speed and mileage. However, the taffrail log has become extinct as an available navigational tool.

So, returning to basics, speed can be quickly calculated by tossing a floating chip (biodegradable, please) off the bow and timing how long it takes to float a given distance beside the vessel.  Speed is a measurement of distance divided by time in which 1 foot per second equals .5925 knots. If you multiply both sides of the equation by the same number, the new values will also be equal.  If, for example it takes a wood chip floating down the length of a 60 foot vessel 5 seconds to complete the distance, you merely multiply 60/5 x .5925 to find the speed in knots. The boat would be traveling at 7.11 kts approximately. 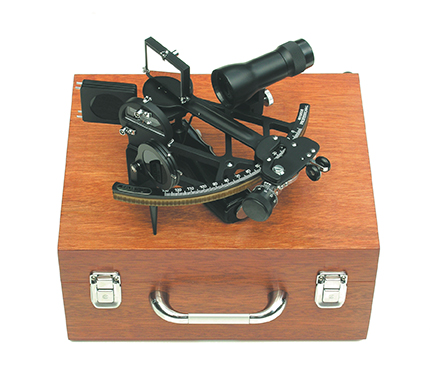 Deprived of the use of electronics, there is little substitute for a good sextant and published tables to determine your position while offshore.  It’s an art form that has made possible countless thousands of successful circumnavigations, and its continuing importance in emergency situations couldn’t be over-emphasized. Hopefully, the navigator thought ahead and set a wristwatch accurately prior to departure.

Now that GPS handheld devices are ubiquitous throughout the sailing world, we often feel that, as long as we have enough batteries, we’ll be good to go in an emergency. That’s not necessarily the case. Lightning can even fry handheld devices if they’re close enough to the strike. And not all handhelds provide you with charts. If you are in an area that is susceptible to lightning, you can temporarily store your handheld GPS in the oven,  which will act as a Faraday cage.

Observation will help answer a number of questions for the navigator. It is helpful to know that whitecaps begin to form in about 11 or 12 knots of true wind speed. At 20 knots, the tops of waves will blow off. At 30 knots waves start to pile up and are streaked with spume.

Many good barographs are still mechanical and don’t rely on electricity other than a small self-contained battery. With some cloud study, and an understanding of the interrelationship between barometric pressure, wind direction and wind speed, a good navigator can begin to get an understanding of what kind of weather to expect in the near term and on which side of a low pressure system a vessel will pass. Sea state can also provide clues about weather systems that may be hundreds of miles away.

LANDFALL
If one is given a choice between making a landfall in an unfamiliar place at night without knowing one’s exact position or heaving to, the safe option should be to wait for daybreak. Locate known fixed navigational aids on your paper chart and proceed slowly. Lead lines, like taffrail logs, seem to have gone out of vogue. Certainly a rough lead line can be fashioned out of a weighted line that is marked every 10 feet. But wouldn’t it be easier to have a proper lead line made up, just in case there’s an electrical problem?

There are a variety of man-made clues to direction and location that can serve as hints. Aircraft contrails and the glow of a large city’s lume offer a couple of hints. Atlantic City can be visible at sea for 20 miles or more. While stories exist about people who navigate their way to Hawaii following the trails left by passenger jets, following the plane headed instead toward Tahiti may prove to be a detour you’d rather not take. Learning celestial navigation and having the proper tools would be a far better way to get across the Pacific in an emergency.

Happily enough, the lightning that struck close to our aged sloop didn’t hit the boat, and we didn’t need to reach too deeply into our bag of navigational tricks to get us home.  In that instance, it was merely a nightmare that didn’t become a reality. Other boats I’ve sailed on, however, haven’t been so lucky. Boats are struck by lightning and electrical failures do occur—sometimes in mid-ocean. Understanding a few tricks isn’t a substitute for prudent navigation, but with a little preparation a few tricks can help iron out some wrinkles in an emergency situation.