The day started off great. It was a gorgeous morning. My wife, Heidi, and I got up at a civil hour and readied things on our Shearwater 39 for a short hop from our beautiful anchorage in St. Anne, Martinique, to the marina at Le Marin—literally right around the corner. My daughter was due to arrive late that evening from San Diego, and we thought we’d get some dock space so we could make it an easy transition for her, use their facilities, fill the water tanks and get a comfortable start again the next morning.

Alas, Neptune had other things in mind for us that day. At first, all seemed normal. We got the fenders and lines ready and, with Heidi at the helm, I started reeling in the anchor chain, pointing in the direction she needed to go for a smooth process. Just as I gave her the sign that the anchor was up and we could start off, I saw her waving frantically for me to get into the cockpit NOW!

THE CRISIS STAGE
I started walking back, deliberately, but not hurriedly—until I saw it. We were heading in reverse at full speed right toward our friend’s beautiful Valiant (we’d just had dinner together the previous night). What I didn’t yet know is that we had completely lost control of the gear-box!

As our friend was lifting his head from his morning coffee to bid us fair winds, his thoughts went from, “There goes Centime,” to “Uh, oh. This doesn’t look right,” to “OMG, there is something very wrong with this picture!” — all within about a second.

Heidi yelled to him something about losing control of our transmission. He jumped into his dinghy to help, while I was doing my best to steer us in reverse away from the Valiant and other boats anchored close by. In the midst of our frantic jiggling, the transmission somehow, miraculously, went into neutral. Once reasonably clear of the other boats, Heidi and I quickly dropped the anchor again and killed the engine, which gave us some time to regroup.

THE TRANSITION STAGE
By now things were quieting down, our friend came aboard and offered to operate the transmission from below so we could re-anchor in a more suitable location, pay out the proper amount of scope, start getting a grip on what had happened and establish a suitable plan of attack. Our friend then commented that the engine, at least, had the class to break down here in the open and not in the middle of a Med-mooring maneuver in tight quarters. Agreed and appreciated.

THE DISCOVERY STAGE
I had to look at every part of the system. I followed the path of the cable from the control lever in the cockpit to the support post where all the wires and cables are passed under the deck to the very hard to get at space between the underside of the cockpit and the top of the main fuel tank, through the battery compartment behind the companionway steps and finally to the engine compartment in the saloon. Thinking things through and then taking apart enough of the boat to fully establish the extent of the necessary fix, I realized that part of this discovery was to try to understand how to get at everything so I would be able to fix the cable properly.

“Do I really have to fish a new cable from the cockpit to the engine compartment, or can I jury-rig something?”At this point, a memory flooded into my consciousness. It was a casual statement made by our yacht services folks back in Portland, Maine last September after a substantial refit, that now worried me.

“Not one more cable or wire can possibly fit in the support post,” the yard manager had said. That was the support post that I now needed to run a replacement cable through. I wondered if I could even get a proper cable here in Martinique? And, what would Nigel Calder have to say about all this?

THE FIX
I was actually facing a relatively simple project. All I needed to do was fish a new cable and make the connections, but I did need a proper cable. Miraculously, the very well stocked store Mechanique Plaisance in Le Marin, had exactly the cable I needed, to the centimeter. It took a full day to take things apart, buy a cable, fish it through and put it all back together.

There was, however, one very frustrating glitch in the process; the rigid sections at the ends of the cable are about seven inches long. The space under the cockpit sole is not quite seven inches deep, but the ability to angle the cable end just a bit allowed this first major turn to be negotiated successfully.

It was while working to make the second tight turn, around the fuel tank and past the manual bilge pump hose, that my heart sank. When trying to get the proper angle, both vertically and horizontally, to negotiate this bend, it happened. I felt the rigid end section suddenly become flexible and heard the tinkling sound of the rigid end fitting dropping into the bilge. The brand new, correctly sized cable was now effectively a throw away.

As I was about the give up, buy another cable and go through everything again, it occurred to me that maybe the still-good rigid section of the old cable could be inserted and crimped to the new cable. I was able to achieve this with a crimping tool and some luck. While I could not get an ideal 360-degree crimp, I did get one of 180 degrees that allowed for the proper amount of deflection at the transmission without allowing the joint to be pulled apart with moderate force.

I contemplated using a swaging tool to try to get a more secure 360-degree hold, but it was too wide and I was afraid that I would destroy what I had just fixed or fatigue the metal to the point that it would indeed be a throw away. I decided to leave well enough alone, but I did go and buy another cable to have ready, should my jury-rig fail.

THE TESTING AND COMMISSIONING STAGE
After making the connections, but before putting everything back together, Heidi and I tested the action of the new system. I looked carefully at the deflection of the push rod at the transmission shift lever; there was quite a bit more in forward gear than I had imagined but much less in reverse. We put it in and out of gear several times while I watched the action at the crimped connection. All seemed to work well, at least without the engine running. We started her up to check things in real time, put the transmission into gear and immediately heard a disheartening grinding sound. The linkage clearly needed some fine-tuning and, after some adjusting, all seemed to work near perfection.

Months later, after we sailed, motored, anchored and maneuvered from St. Anne to Grenada, and back to Martinique, the cable repair still worked flawlessly (knock on wood). 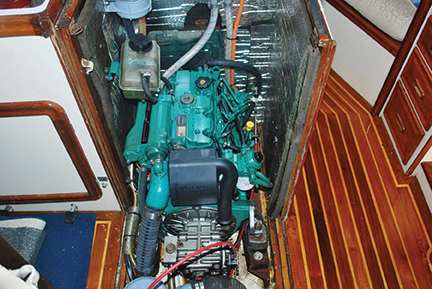 THE OPTIONAL, BUT NECESSARY STAGE
This is the kick back with a very cold beer and reflect stage. After all the tools were put away and everything cleaned up, I was able to reflect on the tremendous amount of very useful information I had just learned about our boat. It was also an opportunity to reflect on a bigger picture. Which, is old Neptune wants us to pay better attention to things—any little thing that just doesn’t feel right or sounds just a tad different than usual. In this case, the important difference was slightly more resistance in the transmission control lever after some unrelated engine work back in Antigua. My initial thought was that I’ll have to grease the cable, probably when we get to Grenada at the end of the season. As it turned out, the resistance was related to the linkage fitting that had seized in the transmission shift lever, so the push rod fatigued and snapped off.

The lessons learned were on two levels: on the basic level, I learned a lot about what’s in the bowels of our relatively new-to-us boat, just how very cleverly engineered the single-lever-control-system really is and just how hard some easy repairs can be and how easy, sometimes, a seemingly impossible task can turn out.

On another level, there was the very important lesson that we should never let any new sound, feel, smell or misplaced object (nut, pin, etc.) go unchecked, regardless of how subtle. As Heidi said, “If something all of a sudden seems different, it won’t go away, it will only get worse!” 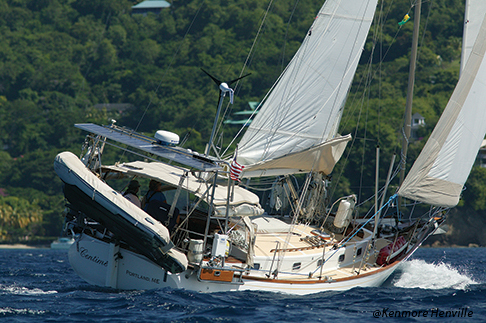 Dennis Jud, a landscape architect, and Heidi Love, a creative director, left their jobs and sold their home in Portland, Maine in June of 2011 and are currently living in the Caribbean on their Dudley Dix designed, South African built, Shearwater 39 sloop. They hope to make it a 10 year journey to the South Pacific and, perhaps, beyond.

View all posts by Dennis Jud