Over the weekend of March 16 and 17, something happened that many sailing industry veterans had hoped for but never quite believed would occur: Island Packet Yachts had a large, friendly IPY Owners’ Rendezvous at the factory in Largo, Florida. More than 60 owners representing 33 boats traveled to Florida for the occasion and one couple, who had sailed their IPY from California to Australia, flew in from San Diego just for the occasion. 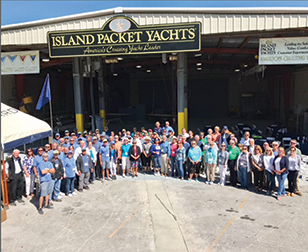 What was all the excitement about? After a year under the guidance of the new owners, Darrell and Leslie Allen, IPY could confidently announce that the company was reborn and in good health. The order book for IPYs, Blue Jackets and Seaward yachts are all looking healthy, boats are being built and dealers are making one sale after another.

Just two years ago, many believed IPY was on the rocks and sinking. But where many saw trouble, long time IPY dealers, Darrell and Leslie Allen, saw an opportunity. With the help of a savvy investor, they were able to buy the company lock, stock and barrel and to begin again. That was just over a year ago. 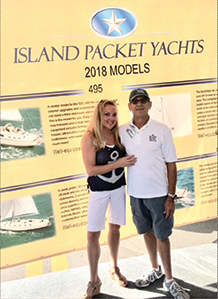 “We had been dealers, not boat builders,” Darrell said when I sat down with him at the rendezvous. “But we jumped in and started building boats because we had a few orders. We had 13 employees and all of them had long experience at IPY and knew how to build the boats. Now we are up to 33 and looking for more skilled craftsmen. It’s amazing. The news right now is that we are able to build the boats and deliver them on time.”

As long time dealers who have sold dozens of IPYs, Darrell and Leslie knew the boats very well and had been involved in many dealers meetings and discussions about how to make the boats better. Bob Johnson had had great success during the good decades prior to the Great Recession and was cautious about making too many changes. Bob is still the IPY designer and still consults. But, now, the Allens are free to make some of the improvements to modernize the boats.

“We think it is important for us to take a different approach so buyers know that the IPYs of 2018 have been thoroughly updated and that the quality and integrity of the boats is better than ever,” Darrell said.

They are using more high tech composites and modern fixtures and gear. The drawers are all now built with dovetailed joints instead of being glued and screwed. They are using less teak to reduce maintenance but sticking with signature details like the cedar linings of closets.

“We believe in working collaboratively with the building staff and ask them to come to us with ideas of ways we can make the build process and the final products better. We didn’t come in with a lot of preconceived ideas of how to do things so we need to work with the team and encourage their innovation,” Darrell said.

One of the changes they are making to the customer experience is to invite new owners to customize their boats while it is being built. They can specify their own lighting fixtures, mirrors, fabrics and Corian colors. And, for a price, IPY will customize the interior spaces within reason.
The big project that IPY undertook in the first year was to design and build a new 35 foot couple’s cruising boat that they are calling the 349. Using the Estero hull as the base platform, they created an all new deck, cockpit, transom and interior plan. The new boat is certainly an Island Packet of old but with a lot of new touches and upgrades.

They decided to go with a Solent style rig instead of a cutter rig that would be more familiar to IPY owners. The Solent rig has the 90-percent jib tacked just aft of the bow and fixed to a carbon fiber Hoyt Jib Boom that makes it self-tacking and completely controllable from the cockpit.
Forward on the bowsprit, there will be a masthead stay from which you can fly a roller furling reacher or Code 0 when you are sailing downwind. These sails can be used to within about 60 degrees of the apparent wind, so you will be using it a lot and will benefit from its power and ease of handling. Like the jib, the big sail can be managed from the cockpit without having to go forward. 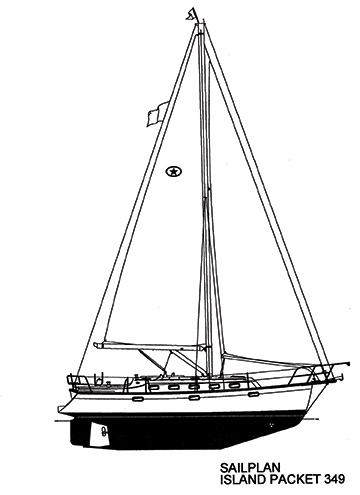 Down below, the 349 will have two double cabins and one large head with a shower stall. The galley is aft and to starboard of the companionway. It is compact but has plenty of counter space, double sinks that are near the centerline and a large pull-out fridge drawer under the counter.
The dinette table has folding leaves so you can sit up to six for a meal. Along the starboard side of the saloon, there is a bench that can convert into two chairs with a table between.

The idea behind the 349 is to deliver a complete boat that is ready to cruise with items like an inverter and battery charger included in the package. As Darrell noted, the boat can be customized to a certain extent so the owner will know that his or her’s new 349 is unique. Plus, the new boat will be offered at a price that is well below that of any IPY yacht built in the last 15 years. Given the integrity of the design, the innovations in the rig and interior and the price, it is no wonder that IPY has sold five 349s before the first boat was finished.

After a year of learning the business and shepherding the rebirth of the brand, the Allens brought in a highly respected production consultant, who has run boat building plants for Bertram, Chris Craft, Chaparell and worked for 10 years with Bob Johnson at IPY. What the Allens and their team learned was that they were doing it right and building in the efficiency and the quality that a boat building company needs. 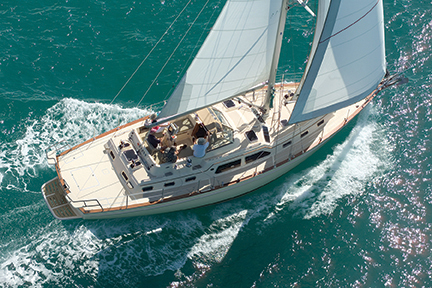 “We are sometimes amazed at how this has all come together,” Darrell said. “We have had so much help from great people, we’ve been blessed with great support from our owners, suppliers and dealers and our team has really bent over backwards to make this work. We are people of faith and there are times when we know that what’s happening has to be all part of God’s plan.”
To learn more about the rebirth of Island Packet Yachts, log on to www.ipy.com.