EPIRBs continue to provide a unique measure of safety to our activities offshore. Here is the story behind what happens if and when you’re ever required to push that button.  (published January 2013)

The winds had been steadily building for several days as Great American approached within 350 miles of Cape Horn. The seas had worked themselves into froth, towering more than 65 feet in height, and finally, in the grey cold of the Southern Ocean, one of the waves spun the 60-foot trimaran sideways and capsized the boat. Rich Wilson and Steve Pettengill, the two sailors attempting the San Francisco to Boston speed record, triggered their 406 MHz EPIRB and waited, hoping that someone would receive their distress call and send help. But what hope was there in such a remote part of the planet? An hour later, they were wrenched out of the ocean by a huge wave, catapulted through the air, and the vessel was re-righted, awash and dismasted. They tripped the emergency beacon on their ARGOS transponder, and again hoped that someone might get to them within several days—a long wait in survival suits in 35° water!

The above situation happened in the 90s, but similar situations continue to happen today. In October of last year, HMS Bounty sank off North Carolina. It would have been far worse if Wilson and Pettengill had been without an EPIRB (Electronic Position Indicating Radio Beacon) as they approached Cape Horn. Today’s recreational tracking devices, though very beneficial, are still no substitute for an EPIRB in an offshore emergency. 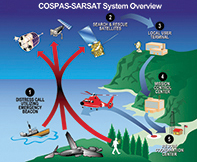 EPIRBs can transmit on up to two separate frequencies: 121.5 MHz, sometimes available as a homing beacon, and 406 MHz. Starting in February of 2009, 121.5 MHz and 243 MHz COSPAS/SARSAT stopped processing signals transmitted on those frequencies. COSPAS/SARSAT began as a multilateral cooperative project sponsored by the U.S., Canada, France and the former Soviet Union in 1979 to reduce the time to rescue air and maritime victims or others, using satellites to increase the probability of saving lives. Based in Montreal, as of 2011, 26 countries (Algeria, Argentina, Australia, Brazil, Chile, People’s Republic of China, Greece, India, Indonesia, Italy, Japan, Republic of Korea, New Zealand, Nigeria, Norway, Pakistan, Peru, Saudi Arabia, Singapore, South Africa, Spain, Thailand, Turkey, United Arab Emirates, United Kingdom and Vietnam) and two organizations (Chunghwa Telecom of Chinese Taipei and the Hong Kong Marine Department) are providers of ground segments, while 11 countries are user states (Cyprus, Denmark, Finland, Germany, Madagascar, Netherlands, Poland, Serbia, Sweden, Switzerland and Tunisia). The term SARSAT is an acronym for Search And Rescue Satellite Aided Tracking; COSPAS is a Russian abbreviation for Space System for Search of Vessels in Distress.

In emergencies, rapid detection is of paramount importance. Air crash victims surviving the crash have less than 10% chance of survival if the rescue is delayed beyond two days. If the rescue can be accomplished in less than eight hours, their chance of survival is increased to better than 50%. Timely handling of maritime emergencies is no less important given the increased risk of hypothermia and exposure. To decrease the recovery time and increase the reliability, the system is comprised of three main subsystems: the emergency beacons, the COSPAS or SARSAT satellites with their repeaters and processors, and the ground stations. The system can be used in two coverage modes: regional and global.

Currently COSPAS/SARSAT is using five NOAA polar orbital satellites, NOAA 15, 16, 17, 18 and 19, as well as METOP-A. The two Soviet orbital satellites are now offline. When the satellite receives the distress signal, the identification, location and time data is relayed to a Mission Control Center (MCC) which alerts the appropriate Rescue Coordination Center (RCC) or the MCC in another country. The RCC then begins the actual search and rescue operation in accordance with local procedure. (See graphic at: http://en.wikipedia.org/wiki/File:New_C-S_System_Overview.jpg)

I would like to note that the Admiralty List of Radio Signals (Vol. 5, GMDSS) has virtually every rescue service in the world listed, along with their contact details. It’s a publication that is available through most charthouses. If you ever are forced into a liferaft, you may want to have your EPIRB, satellite phone and the phone number for the closest RCC. You will be able to tell them in detail about your current condition as well as be able to directly assist with your own rescue.

Originally the 121.5 MHz beacon system was designed to be monitored by overflying aircraft. But the aircraft had to be within direct line of sight of the beacon, and, although aircraft regulations required that aircraft making long flights over water must monitor the distress frequencies, flights over land had no such regulation. The 121.5 MHz system, when monitored by aircraft, did not provide for exact location of the distress beacon, so a large diameter search area would be necessary unless the search craft was equipped with a homing device. The aircraft would be within a 185-mile radius of the distress. The satellite system allows for location fixing using the Doppler shift.

A distinct advantage of the 406 MHz EPIRBs is that they should be registered with the MCC database for identification purposes. In order to register your beacon, you can go to https://beaconregistration.noaa.gov/rgdb. The type of vessel, size, home port, contact numbers, etc. are kept on file using a 15 hexadecimal alphanumeric identifier that is usually indicated on the outside of the EPIRB beacon. 406 MHz EPIRBs are going to be with us for a while.

In the spacecraft, a repeater data system relays the 406 MHz signals in real-time to the ground station to be picked up if a ground station is within range. In addition, when 406 MHz signals are received, an onboard signal processor receives the signals and preprocesses and records the data for transmission to the ground at a later time in the playback mode when the satellite is within range of a ground station. LEO satellites transmit to a LEOLUT ground station, and GEOS satellites transmit the data to a GEOLUT earth station. This enables all areas to be covered—even those outside of the range of a ground station—and gives the system complete global coverage. But the storing and relaying is only available with 406 MHz units, and they are therefore the only EPIRBs with complete global coverage.

The information received at the LUT is forwarded to the MCC and on to the RCC to determine who will be involved in the operation and respond to the distress. In the U.S., the Air Force, Civil Air Patrol, Coast Guard, Coast Guard Auxiliary, and state and local police play major roles in rescues. If the rescue is to take place far offshore and the RCC deems the assistance of merchant vessels is necessary, AMVER, one of the Coast Guard’s worldwide “tools,” may be brought in to help as well.

AMVER (Automated Mutual-assistance Vessel Rescue system) had been operated by the U.S. Coast Guard on Governors Island New York, but is now located in Martinsburg, West Virginia. It rapidly grew from a system primarily concerned with the North Atlantic to the worldwide safety net that it provides today. Participating merchant vessels, about 15% of the world’s ships, report their vessel identification, position, size, on-board medical capabilities, and so forth daily using satellite communication or SSB radio through coastal stations around the world. The world’s first coastal station, Gothenburg Radio in Sweden, was also the first to participate with AMVER. Although there are now fewer coastal radio stations, many of the coastal stations provide the link between the ships and AMVER free of charge as a service to mariners around the world. AMVER also cooperates with other vessel reporting systems such as Australia’s AUSREP (Australian Ship Reporting System).

With the advent of the Global Maritime Distress Safety System (GMDSS), the role of AMVER was redefined to complement the emerging technology. Rescue coordination centers around the world began using EPIRBs, Inmarsat-C and Digital Selective Calling terminal auto-alarms to “take the search out of search and rescue.” As satellite communication capabilities are becoming more ubiquitous, the means of getting emergency information back to rescue services are also changing. When the RCC determines that a rescue will need the assistance of another vessel, the RCC contacts AMVER, and AMVER, in turn, calls upon the closest participating ships for aid. Assistance is granted to anyone at sea requiring it, regardless of the flag of the vessel.

After the initial signal had been received from Great American’s EPIRB by GOES-7, the RCC notified the Boston Coast Guard that there was a vessel reporting an emergency. Shortly afterwards, a NOAA satellite carrying both EPIRB and ARGOS equipment confirmed Great American’s position 350 miles northwest of Cape Horn. The RCC called AMVER to help orchestrate a rescue. ARGOS contacted the shoreside router for Great American and AMVER to supply any further details that may help in the operation: color of the bottom, size and type of liferaft, etc. After consulting their tracking system for available ships in the area, AMVER requested the assistance of the 900 foot refrigerated container ship, New Zealand Pacific, which was within 75 miles of the stricken multihull. 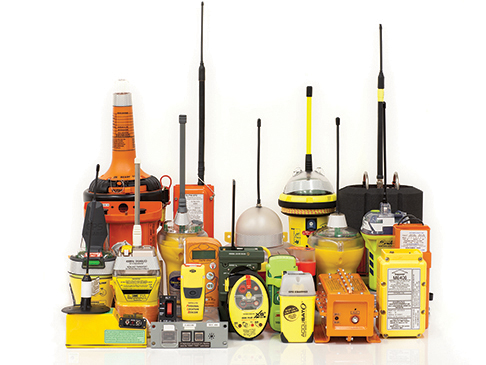 Rich Wilson and Steve Pettengill were rescued from their floundering vessel within 15 hours of their initial request for help in a remote part of the ocean. Although a great deal of the credit must go to the skill of the crew of the New Zealand Pacific and Wilson’s and Pettengill’s good fortune in having that ship in the vicinity, the rescue demonstrates that the COSPAS/SATSAT system along with the RCCs and the Coast Guard’s AMVER system are capable of accomplishing an amazing task. It still remains the task of the sailors at sea, however, to understand how the system works and how we can help keep it efficient.