Venturing offshore still has its risks: We’re caught unaware by the weather. Vessels run aground. Auxiliary power fails. But some things continue to work through it all.  (published March 2015)

Nav stations have changed, and they continue to change. We now have more means to gather positioning, performance and weather data than ever before. In addition to GPS, VHF, SSB and weather fax, we now have satellite communications to connect us to the Internet, computer displayed digital charts, weather satellite picture receivers, smartphones and various other gadgets to help gather an ever-increasing amount of information. But despite all of the new tools, the older, more traditional tools not only have their place in the modern nav station, they still provide the most reliable foundation for our work as navigators and onboard decision makers.  We still need the means and understanding of how to put a Line Of Position (LOP) on a paper chart.

Experienced navigators still have their preferences, too. What we grow up with plays a big role in what we prefer to continue to do. Aboard one of the boats that I raced on, one of the navigators was a “triangle guy.” Using a couple of right triangles, he’d place them side by side and transpose a bearing line off the compass rose by sliding one triangle against the other across the chart. It’s a technique that has worked well for centuries, and as a graduate of one of the country’s maritime academies, he certainly had qualified instructors to guide him in that technique’s effective use. Warren Luhrs, prior to his 1986 BOC campaign, was also a “triangle guy.” No parallel rules for these guys! They were fast and effective with a manual system that they preferred.

Others, however, prefer the more common parallel rules that consist of two—usually plastic—rulers joined by a set of hinges. Variations exist within this category, but the principle is much the same. Recently I even purchased a set of parallels with three rulers, enabling a bit more flexibility and speed while crossing from the compass rose to the LOP I was trying to draw. Chart tables have gotten smaller as computers have begun to take up an increasing amount of already limited space, and I wanted to try to reduce the number of times I’d have to move the ruler while bouncing around in the nav station. The set of triple rulers helped, and it was a system that I was already familiar with.

Even manual things have changed and improved over the years. Several years ago I spotted a Portland Plotter in a chart house. I didn’t take much notice. It seemed like just another plastic gadget I really didn’t need. During a transatlantic race with a friend as co-navigator, he told me, “You’ve got to check this out. It makes plotting a lot faster and easier.” Also a graduate of a maritime academy as well as the winning navigator in one of the round the world races and with a staggering amount of offshore experience, it made sense to listen to him. I have checked it out, and now, for me, it has replaced the parallels I used to prefer.

The main advantage I find in the Portland Plotter is that it’s no longer necessary to move anything across a chart. If, for example, you’d like to draw your heading from a known position, line up the variation on the dial with your desired course. Point the ruler generally in the direction of the bearing or course. And rotate the ruler slightly until the grid pattern in the middle of the dial lines up with one of the latitude or longitude lines on the chart. Essentially your compass rose, complete with local variation, is on the tool rather than making it necessary to transfer that information across a chart. I can’t count the number of times I’ve had to re-trace my tracks with parallels while plotting positions from LOPs taken from bearings on known objects as the boat jumped off waves and I bounced around down below in the nav station. With the Portland Plotter, you just set your course to the local variation, lay the ruler on your position and superimpose the lines. It’s a reliable and accurate manual system.

These more-or-less traditional tools have an advantage over some of the modern electronic tools in the fact that they are manual. The day or night that the batteries go flat, the system bus is shorted out for the instruments, the computer crashes, lightning hits the boat, a wave comes through a hatch or any of a multitude of other “unforeseen” problems occur, you’ll be very happy to have and know how to use the manual, “traditional” tools. You still need to be able to navigate your vessel safely.

You may be able to get a bearing to a lighthouse off the GPS-driven computer display that uses your tracking software. But if there are problems, you will certainly be glad that you had a good hand-bearing compass and had experience in using it. Even without equipment failures, the night you’re approaching another vessel, you will want to know whether they are gaining or losing bearing as you close range. If their bearing is remaining the same and they are within a half-mile, you will certainly want to modify your course or discuss the matter with the other captain on the VHF. When you determine early that they are gaining or losing bearing, you will know whether they are going to pass clear ahead or astern. And none of that will be on the computer screen in the nav station unless it’s enabled with AIS—and working. That situation may be illuminated on radar, but radar, too, can be subject to electrical problems.

Hand bearing compasses come in a variety of sizes and types. Autohelm has a particularly good electronic model, capable of retaining several bearings in memory and lighting the digital display at night. The batteries are long lasting, and the unit is small enough to conveniently fit in a pocket or be worn around the neck under the clothes so it doesn’t catch on things. Non-electronic models come with handles, lights and various sights. My favorite is a simple “hockey puck” type. It can be illuminated by charging it with a flashlight or any other light source. And the numbers are large enough that I can read them, even without my reading glasses. Mine is a French Mini 2000, made by Vion.  Besides wine, food, and love, it may be one of the best things the French make.  It’s elegant in its simplicity. 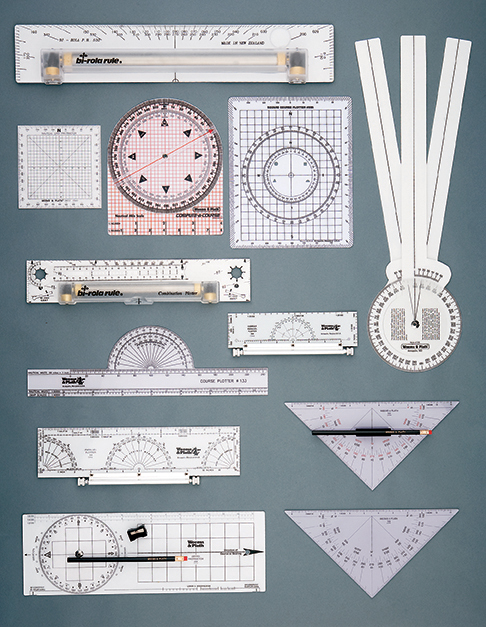 Elegant simplicity for the navigator doesn’t just stop with taking bearings, though. Simple dividers also come in a variety of shapes and designs. Some are merely two straight-legged hinged arms. Others have a round top, so that you can conveniently squeeze the top to open the arms. After a little use, the motion becomes quite fluid with one hand while you can still try to hold on to something down below in a boat slamming off waves. Yet other dividers have a screw-post adjustment that allows for controlled opening and closing of the arms. If occasion takes you aboard boats that bounce a lot, having the screw post means that when you put the dividers to the chart, you won’t be opening and closing the arms every time you slam off another wave. Sailing on fast multihulls, and going long distances on a variety of boats in a wild mix of conditions, I’ve grown to appreciate the dividers with a screw-post adjustment.

The tools to put good marks are just part of the equation. You also need good charts. They should be updated regularly, and you should be aware of the chart datum to which they refer.  Make sure that the information you’re getting off your GPS is consistent with the datum of the chart. If you don’t, it’s quite possible that while you’re sailing safely within a marked channel during the day, the GPS position, plotted to the paper chart, might indicate that you’re somewhere up on the beach. That little discrepancy has happened to me in Polynesia and elsewhere. Similar sorts of things may have recently led to the Indian Ocean grounding of one of the Volvo Ocean Race yachts.

Good, up-to-date charts are critical in any case. Charts such as Imray come in a waterproof paper. Others, such as Admiralty, have a heavier quality paper than the U.S. charts and occasionally have profiles of the land and its various approaches. And Chartkit offers a collection of charts within a package. The price can be somewhat less for a fairly complete set of charts for a particular area, but sometimes the charts within the kit aren’t always oriented north up. Be aware of what you’re looking at before you need the information in a hurry.

This is where I depart from more of the traditionalists. I like to fold my charts, not roll them.  I want them to lay flat on the nav table rather than curl up and run across the nav station. When I fold them, I want the written title to the chart, its number and some identifier I create that determines when during the passage I will be using the chart. The writing should be in the same corner for each of the charts so that when I’m searching for the next set of charts, an approach for example, I won’t have to open each chart to find what I’m looking for.

Prior to departure, I like to plot the rhumbline between waypoints and label their range and bearing to the next waypoint. And, sometimes I will even highlight those range and bearings with a highlighter pen. I know that flies in the face of convention and highlighter pens are not erasable. If things are penned onto charts, the charts can quickly become cluttered and unusable. But for a race, I may need information quickly, and it may be in the middle of the night. The cost of chart replacement may be a secondary consideration in such situations. 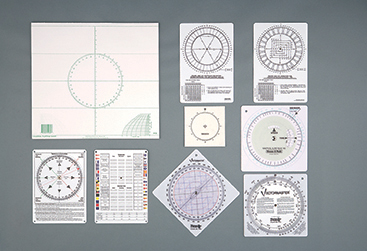 While even the more traditional tools have had some changes over the last few years, the principles remain the same. The fact that they are manual tools means that they’ll work while in some cases the newer, glitzier tools may fail. As the navigator, the failure of your tools won’t make a good excuse for the failure in your job. It is important for all of us to do the best that we can regardless of unforeseen events. Our vessels and those aboard depend on it.