Standing at the chart table, my buddy Will and I poured over charts of the Northwest coast from Alaska to Oregon. Large and small scale were all there for us to peruse and we talked of plans ahead; how we’d handle certain stretches of water and, of course, what the weather was likely to do while we’re out there.

We were in the chandlery at the Northwest Maritime Center in salty Port Townsend, Washington where spools of traditional manilla rope hung on the wall next to us, brass fittings filled drawers and tall bookcases overflowed with sea stories, cruising guides and how-to texts. Wooden schooners sat at the docks just beyond the doors and in the adjacent building, several boats were under various states of construction. It’s the type of place where the seafaring culture is palpable and the people work passionately to teach all things boating and sailing related.

Besides the ambiance of the place, the best part was just being able to access real charts of the places we want to go. No iPads, no chartplotters, just real paper charts. And as places like these become increasingly rare in our modern, information-now world, it’s increasingly important to have a spot to spend some time thinking out what we’re doing, where we’re going and what it will take to get us there. Because in the end, planning and preparation are just as essential as getting the sails up and full of wind.

There is something about planning a voyage or cruising adventure on paper that never gets old. Plotting courses with parallel rulers and distances with dividers is something that I find myself doing less and less, but I shouldn’t. Putting pen to paper seems to make it more real. And making project, gear and provisioning lists with a pencil and paper instead of a smartphone seems to commit those items to memory in an indelible way. To be sure, the fun of all this planning is a big part of the experience and excitement of the voyage itself.

With our eyes set on a spring run down the coast to the Columbia River, then back up to Victoria with a three month rounding of Vancouver Island on our radar for the summer, planning mode is full on and the thrill of it is setting in. Gathering the necessary charts, creating lists of things that need to get done, finding cruising guides that suit our needs and collecting anecdotes from those who’ve sailed similar routes are all pieces of the process.

A bigger part of it all—and of any voyage—is just getting out there and rolling with the unexpected. Weather will change time and again, anchorages will come and go, and people met along the way will make for many memorable moments. 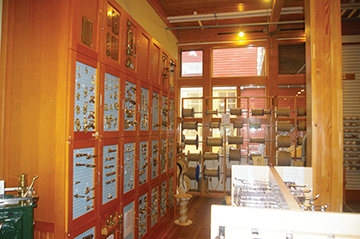 All of that starts with planning. And, thankfully, there are still places where we can do some of it on paper.