The winter after Tony Knowles and I purchased a well-maintained 10-year-old Jeanneau 45.2, we dismantled the boat’s interior so we could inspect all of the systems, plumbing, wiring and tanks. We’d renamed the boat Lime’n—we be lime’n under da lime tree, mon—but we weren’t lime’n that winter. 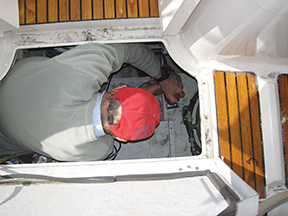 We got to the tanks eventually and found that both stainless steel holding tanks were leaking. These were mounted beneath the forward double berth and the port aft double berth, which seemed too close to our pillows. The tanks needed to be replaced and we were certain we wanted to install the new ones as far from the sleeping quarters as possible. Luckily, the 45.2 is a roomy boat with large storage lockers fore and aft. There is plenty of room in the port cockpit lockers for a new 25-gallon tank for the aft head and space in the huge sail locker in the forepeak for a second 20-gallon tank to serve the forward head. Both could be installed well above the waterline so they would gravity drain when at sea.

Our boat was originally built for a Great Lakes sailor, so it did not have overboard discharge plumbing; you had to go to a pump out station to empty the holding tanks. Our plans called for the boat to be in the Bahamas, Caribbean and at sea, so we would often be in open ocean waters, where evacuating the holding tanks would not be a problem.

NEW TANKS
The original tanks were welded stainless steel. Replacing them with steel tanks would involve a lot of custom welding and cost. The simpler solution would be to go with pre-made tanks. After some investigation, we determined that the polyethylene rotomolded tanks built by Trionic in Milwaukee, Wisconsin would fit our needs. And, poly tanks should contain odor well.

When the tanks arrived, we were pleased to note how light they were and how thick the walls and edges were. The tanks had been drilled for hose attachments, with the intake and air vents running into the top of the rectangular tanks and the outflows running from low on the end (but not right at the bottom). This meant that the exit hose came out from the side instead of the bottom, which in turn meant that we could never completely empty the tank.

The tanks were sized to fit neatly into the allocated spaces in the cockpit locker and sail locker and are held in place with wood chalks and braces that are painted light gray to match the finish of the lockers. It was fairly simple to install them and will be equally simple to remove them if we ever have to. 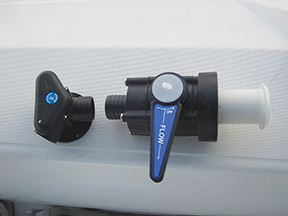 Because we planned to have overboard discharge as an option, we needed to install two new thru-hulls and seacocks. The boat was fitted with bronze seacocks throughout, but we decided to go with Marelon fittings from Forespar, which are robustly built, easy to install and will never corrode.

We replaced all of the old hoses with new, impervious, head-specific hosing from West Marine. Wire-reinforced and with very thick walls, this hosing is somewhat hard to work with but promises to eliminate odors. Plus, it is colored white, so there will be no UV-supported growth inside.

To allow for overboard discharge, we installed Forespar Marelon Y-valves in the outflow plumbing. These heavily-built valves will last a long time and will hold up to repeated vacuum pressure from pump out systems. 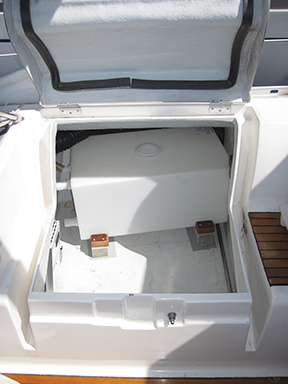 RESULTS
The new holding tanks for the two heads aboard Lime’n have worked well and eliminated tank odor from the after cabin. In the forward tank set up, we mounted the tank too high in the sail locker, so the 12-foot-long feeder hose from the forward head was often full of wastewater, which gave off some odor. The tank forward also developed a slight odor all its own, which we hope to eliminate by resealing all of the joints, rebidding the hoses and refastening all of the hose clamps.

Forty-five gallons of black water storage sounds like a lot, but with four people aboard we can easily fill the tanks inside a week. And with our Jabsco electric macerator head, it is easy to pump a lot of water through the systems; both a good and bad thing. The Y-valves and seacocks have proven to be excellent—they are easy to turn on and off and have not leaked a drop.

Now that the holding tanks have been replaced and moved away from the sleeping cabins, we are all Lime’n a bit more than we were. And with the next small modification, the boat should come up smelling like roses…or at least lime beverages.