After we felt we had explored Bell Sound (even if we had only been in the outer half of it), we continued north towards Isfjord (Ice Fjord) and Longyearbyen. Here we checked in with the Sysselmann, as the Governor is called, got our liquor quota cards so that we could stock up what we needed. As the sun never sets here, until the end of August, we do not have sundowners, but are keeping traditions high with anchor downers. This settlement, which has a strong Klondike feel to it, was founded by the American John Munro Longyear, as a mining town. As we spent some time here last year, we quickly left even though we had heavy fog. The fog meant that there was no wind, which meant that we could anchor in a small open bay next to Isfjord radio, located on Cap Linné. Our crew, Odd, had worked on the satellite services there when the first TV signals came to Spitsbergen in 1984, so it was fun to see all this with him. In the bay there was another small sailboat that we could barely see, but we could hear a lone saxophone playing.

Next day we glided up Foreland Sound, and as we reached Poole Point we got the wind right on the nose. We could still see the walrus, but it was too choppy to go ashore or even stop. We just made it on one leg through the shallow and narrow opening in the reef—luckily the current wasn’t strong. The harbormaster at Ny Alesund recognized us from last year and bid us a hearty welcome. We stayed over a day, while a small gale whipped up the waves. The weather changed rapidly, and the morning came with beautiful sunshine, so we went over to London on the Blomstrand Peninsula. This is pretty much all marble and when the Englishman Richard Mansfield saw it, he thought he’d finally found his fortune. He headed the Northern Exploration Company in the early 20th century and had tried many places to ‘strike gold’—including several adventures around Recherche Fjord and Bell Sound. He started up big scale excavating of the marble on the peninsula, but alas, the marble crumpled when it was excavated. We walked all over the area, inspecting with fascination the remnants of this short lived adventure.

GLACIERS, FJORDS, PENINSULAS
In later years the glaciers have retreated and it has become obvious that Blomstrand Peninsula is in fact an island. So much so, that it is now possible to sail around it on calm days. As the wind piped up, we had to leave the anchorage and it didn’t seem a good idea to sail in among the bergy bits, constantly calving from the glacier. Instead it seemed we could make it up Krossfjorden, which is split in the middle by King Haakon’s land, to Lilliehöek Fjord on the left and Miller Fjord on the right. There were lots of big ice floes in Lilliehöek, but seemingly only a few, very large icebergs in Miller Fjord. We wanted to get to the bottom of Miller Fjord and visit Lloyds Hotel, which is really just a small, trapper’s cabin. However, the wind increased—right on the nose —the waves got steeper and smaller, and bergy bits started to become frequent. After tacking and not getting anywhere, and seeing wind gusts over the 40 knot range, we decided to call it a day and tucked into Tinayre Bay, which in one of our many books on Svalbard, was described as the best and most protected anchorage in all of Spitsbergen. Well, there was a reasonable shelter from the wind and we did eventually get our trusty Rocna anchor to hold, and it wasn’t too rolly, but we wouldn’t call it the best anchorage we’ve seen up here. The next morning we made a feeble attempt to sail the last five nautical miles into Miller Fjord, and then decided we preferred to have the wind at our back and not risk the calving ice bits from the glacier.

As soon as we rounded Cap Guissez and were back in Kings Fjord it was the finest summer day with just a tease of wind. So we decided to try sailing around the peninsula. Where there, according to the map, was only an anchorage at the root of the peninsula, there was now more than four meters depth at a safe distance from the glacier, although there was quite a bit of ice floating around. But the water was glassy calm, the sun shone on the glacier and there was not a breath of wind. It was gorgeous. The glacier calved a few times, but we were too far away from it to even feel the waves. When we had rounded the peninsula, we found a perfect anchorage, which we shared with a small grounded iceberg. Fabulous!

INTREPID EXLORERS
The next day we sailed up past the seven glaciers, towards Danskeøya (Danish island). The northwestern most corner of Svalbard is around an area called Fair Haven, between many islands, where the whalers found sheltered anchorages and good places to land and process the whales. While no one bothered to name the seven glaciers, other than glacier one, two, three, and so on up to seven, the islands are named after the nationalities of the whalers who used them: Danish Island, Amsterdam Island and Hamburg Bay, not to forget Ben Nevis, Albert Island and many Norwegian names. On Danskeøya, one bay was named Virgohamna after the vessel which carried Swedish engineer and Arctic explorer S.A. Andrée up there for his polar expedition in 1896 in preparation for his attempt to reach the North Pole by balloon. He and two brave men took off in 1897, never to be heard from again until their bodies were found 30 years later on White Island; an even more deserted place in the far northeast corner of Svalbard.

There are many amazing stories of the hardships these early whalers, trappers and explorers had. As we sailed south on the west side of Danish Island and by Cobb Bay (Seal Bay), where a post office was established by whalers on a small, low island at the entrance, called Postholmen (“Post Island”). Whalers simply picked up and left mail there to be picked up by the next whaling ship, going the other way. 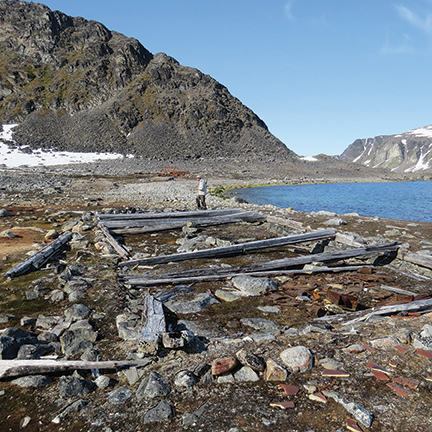 One story that captured our admiration was about two young men, who worked for a research station at Quade Hook (meaning evil corner), at the entrance to Kings Fjord, in 1921. At that time good money could be made for those who took jobs up there. At Christmas time a trapper, who had a hunting cabin across Kings Fjord, was expected to spend Christmas with them, but never showed up. So in February, when the daylight started coming back, the two young men set out in a small open boat to look for him. The Fjord is only about two nautical miltes wide at this point, but the weather can change in an instant and the two men met with fog and the water froze to a thick soup, making it very difficult to row and basically the current took them. Over the next four weeks, they were pushed back and forth across Kings Fjord and the seven glaciers until they managed to come ashore in Cobb Bay on Danish Island. They only had provisions for two to three weeks, but somehow they survived until June on what they could catch, while searchers were looking for them. In their diaries (found a year later) they wrote about the agony of actually seeing the search boats, without being seen; their little white flag not visible against the snow cave, in which they had sought refuge. The last entry in one diary stated: “If we are found and brought home, please plant red and blue flowers on my grave. No white coffin and no white stone. I’ve seen so much white”. Alas, the trapper was never found—only his rifle with a bullet stuck in the barrel. Most likely he was felled by the animal, for which the bullet was meant.

Some stops along the way south: Hamburg Bay, where we saw a couple of whaler’s graves (skull still visible), Farmhamna, where a family of four recently wintered over and the Russian settlement, Barentsburg. We sailed back, as there was too much ice to make a circumnavigation of Spitsbergen, and we managed not to get caught in the ice going south, but had to sail 16 nautical miles straight west to get around the ice, being pushed around the Southern Cape of Spitsbergen. After the ice field, we received the full brunt of the Devil’s Dancefloor, as that sea area is deservedly called. But Touché sailed us safe and sound back south to the mainland, after yet another great sailing adventure on our lovely and well-appointed boat, having had more than enough food for two months.