The light was soft with just a hint of sunset colors, as the sun hung low on the horizon. We had set off from mainland Norway in the evening and now it was midnight, but at this latitude (nearly 70 degrees North), the sun doesn’t set from late May to late July. The Barents Sea was like a mirror, only a slight swell with the reflections from the sun. This was our second trip to Svalbard, and having been seasick last year, I was prepared, but in the end, I worried more about having enough diesel. However, the sights are much better when you’re not feeding the fishes. We saw dolphins and a couple of whales, along with the numerous birds.

We arrived at Bear Island, nearly two days later and anchored in Walrus Bay, where there were remnants from where they processed walrus about 200 years ago. The Dutch navigator and explorer, Willem Barents, who re-discovered Spitsbergen, and for whom the Barents Sea got its name, also named Bear Island as his crew had their first encounter with a polar bear here.

Once ashore, we discovered some old whaler’s graves and enjoyed the lovely sunshine, hoping for a little bit more wind for the next step to Spitsbergen. However, this was the kind of (rare) weather that allowed sailors to visit the meteorological station at the northern part of the island. So we motored up there, anchored in the exposed anchorage and went ashore.

We were greeted heartily by the friendly people manning the station, were shown around and invited for coffee before the skipper had to join the Bear Island Skinny Dipping club. This is duly documented and a certificate signed by witnesses and giving important stats. Mine stated that the water was 37.8 degrees Fahrenheit, the air 39.4 degrees Fahrenheit and the wind at 6.4 knots. After that we left and motored on to Hornsund on Spitsbergen, proper.

We arrived early the next morning in sunshine and beautiful blue skies—it was positively warm. After a leisurely brunch, we were ready to meet the French boat in the anchorage and go ashore. Several reindeer observed us calmly, not the least bit afraid. The French had loads of diesel and kindly lent us 10 gallons, as we were a bit worried that we might run out of fuel. You certainly don’t expect the Barents Sea to be this calm. This year, the weather allowed us to go to the nearest glacier and get some beautiful photos, before we sailed on north. 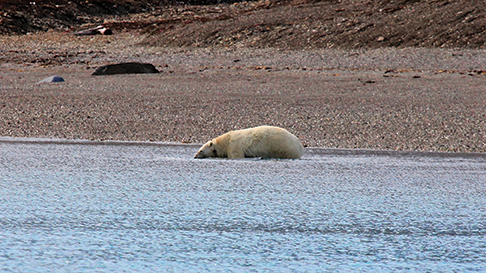 We sailed out of Hornsund, and turned up along the coast to Dunøyene (Down Islands), 10 nautical miles away. Still no wind, but we enjoyed the glorious sunshine and were surprised to see huge icebergs floating on the horizon, having to dodge several of them. In the calm, Hyttevika (Hut Bay) anchorage was perfect, with a view to the main hunting cabin built for the first female trapper: Wanny Woldstad, who we’d read lots about. Wanny Woldstad was quite a character. Widowed, she supported herself, driving a cab in Tromsø in the 1930’s. Trapping was very active and when the trappers returned to Tromsø to sell their skins, they would often take a cab. Her cab was especially attractive, as it was the first to have a heater installed. She listened to all their stories and was so impressed that she wanted to see this magical place. When a partner suggested she come along, she didn’t think twice. But she didn’t go there to be a trapper’s wife or helper, she wanted to hunt herself. She shot many polar bears and generally was a fully contributing hunter and trapper for five years.

We sailed up the coast, past the magnificent Torrell Glacier, the Ice Islands (the glacier providing the ice) and way around the flack at the entrance to the fjord (The first discoverers did not know it was a fjord —several fjords, in fact, when they named it Bell Sound). Pretty much all entrances to the fjords up here have a shallow area, reaching way out and must be rounded before making the entrance. Finally, we actually had some wind, so we aimed for the best anchorage for that wind. But the wind changes a lot in fjords, so in fact we had wind straight from the Nathorst Glacier, making for a choppy anchorage. It was late and we needed some sleep, but we didn’t stay long the next morning, instead headed for Fleur de Lys harbor and the Recherche Fjord. If you think these place names sound French, you are correct. Most of the names here are from the explorers. From 1838 to 1840, a large French scientific expedition plied these waters in order to study the area, carrying out cartography and meteorological observations from the aptly named Observatory mountain. 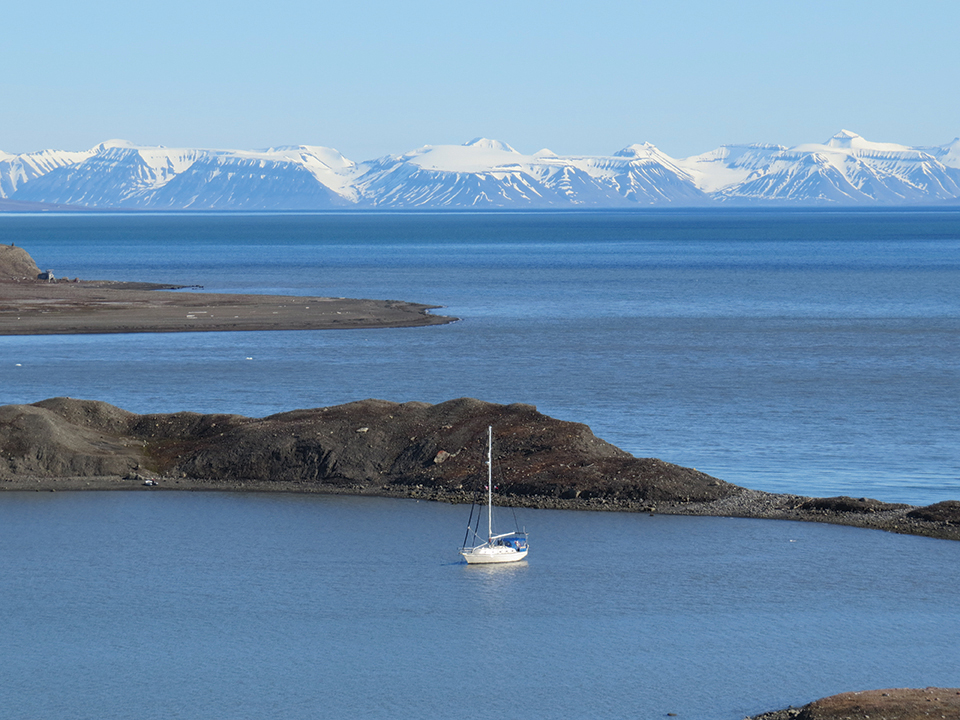 Two large glaciers empty out into the fjord: The Renard and the Recherche glaciers. Of course, these have withdrawn since then, and the observations from the expedition tell us a lot about the change in climate since then. Before the expedition, there had been Russian trappers and Dutch whalers here. Everywhere there are remnants of the blubber ovens and their camps. Fleur de Lys harbor is a very well protected harbor behind a peninsula, and the dry climate of Svalbard has perfectly preserved a couple of wooden whaling boats built between the World Wars.

Here a Norwegian trapper caught the ‘white fish’ (Beluga whales) and tried to make a living catching and canning the fish. Like many other adventures on Svalbard, the success was limited and the adventure short lived. Unfortunately, the swell came right into the tiny natural harbor, from the only direction that would prevent us from being able to anchor and go ashore. Instead, we sailed by and continued to the bottom of the Recherche Fjord, where an entrepreneurial Norwegian tried to start up a tourist destination. He built a cabin, which at the time was called a Villa, but now it’s just a very crooked and dilapidated shack. We wanted to go ashore and see this, but next to the cabin we spotted a roaming polar bear and immediately changed focus. We let the boat drift while we watched the King of the Arctic. It was a female, and she meandered down to the water and into the sea. When we felt she got too close to Touché, we slowly sailed away. And no, we didn’t get close enough to establish the gender. But the bear was carrying a tracker and those are only put on female bears, as the male bears’ neck is too thick to be able to carry a tracker without it falling off. 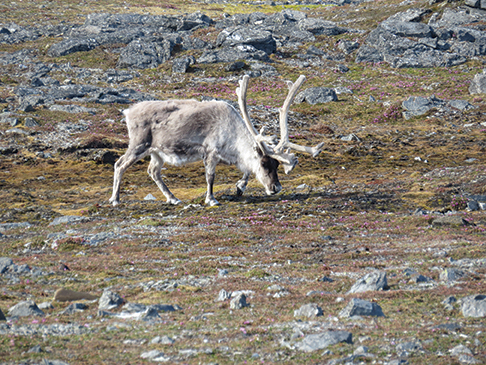 We leisurely sailed on to Aksel Island which lies almost completely across the entrance to Van Mijen Fjord. On the island, one of the few remaining trappers lives, but unfortunately he was not at home. What a beautiful place to live. A view to several glaciers, high mountains with snow on top and the excitement of a polar bear coming by every now and then. In fact, we heard from some other sailors, that every other day a polar bear was sighted here. We went on to Fritjov harbor, a wonderful natural lagoon on the north side of the fjord. The catch to get to this place is that you have to navigate the strong currents between Aksel Island and the narrow spit that separates the narrow sound from the entrance to the anchorage. 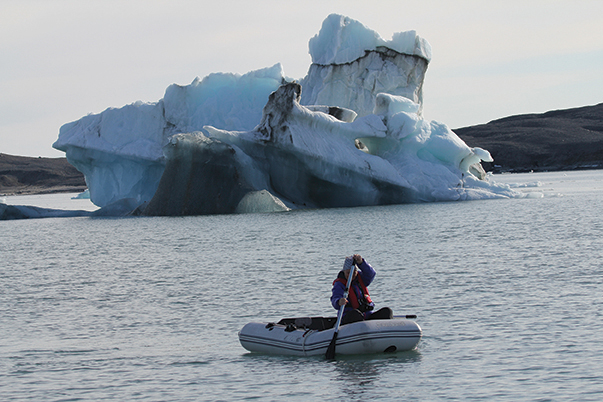 We had calculated the arrival to around slack water, but didn’t get that quite right and of course the wind piped up from the east, meaning we had it right on the nose, plus against the current. That was certainly exciting; if you want to find out how it feels imagine being run through the heavy duty washer cycle. We got tossed and turned with vertical waves going every which way. But it didn’t last too long and at least there were no icy bits we had to look out for. Inside the lagoon, behind the spit, it was calm and serene with a gorgeous view of Fritjov Glacier, two nautical miles away. The air is so incredibly clear, everything seems so much closer than it is. So even though the photos show the boat right up against the glacier, it’s still a good deal more than the safety distance away from the face of it, to protect us against calving, which not only creates waves, but also may send large ice chunks in all directions.