The hardest part about the passage from the east coast of the U.S. to the Caribbean in November is making the best decision about when to leave the dock. The weather systems are variable and forecasts change daily. The Gulf Stream can be challenging. Cold fronts come across the country from the west, one after the other.

Most cruisers leave the east coast as soon after November 1 as the weather allows. A start after November 1, the official end of hurricane season, is sanctioned by most marine insurance companies. Low pressure systems are less likely to form into intense tropical depressions or named storms after that date, statistically, but not necessarily. 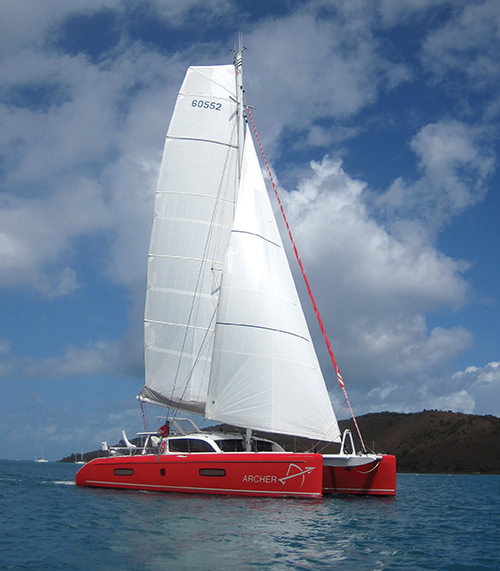 This year, we made our 10th passage from the Chesapeake Bay to the British Virgin Islands during November. We sailed on Archer, our 51-foot catamaran in the Salty Dawg Rally that targeted a departure date of November 2, weather permitting. The difficulty of deciding when to actually leave the dock is the same whether you are in a rally or not.

As almost always happens, a weather forecast for an “on time” departure seemed pretty certain this year, until the actual date approached and things changed. An ugly disturbance began to develop around Cape Hatteras that threatened the fleet with four days of upwind sailing at the start. In addition, a Tropical Wave was forecast to cross our path; at first, it had a low probability potential to develop into a named storm.

The Salty Dawg Rally, a rally for experienced offshore sailors, encourages each skipper to make his own decision when to leave from the East Coast. As a result, the departure dates were scattered over a 12 day span.

A DATE IS NOT CAST IN STONE
Only one boat left on the actual scheduled departure date of November 2. Eight or so skippers elected to leave one to three days before the scheduled “start” on November 2, getting ahead of that “ugly disturbance” at Hatteras. About 30 left between November 3 and 5. The forecast models did not clearly forecast a named storm until November 6 and most skippers who left in this time period felt they could maneuver around the Tropical Low. Nine elected to delay about a week until November 10 to 11.

All arrived in the Caribbean safe and sound…..the difference was in the amount of up wind work required and the degree of discomfort endured by the crew.

In an ideal world, all skippers would make their decision as a result of careful evaluation of several weather sources combined with an understanding of their boat, the experience of the crew, and everyone’s tolerance for the anticipated conditions. They would know what risks they were taking, anticipate the conditions they were likely to face, and build “what-if” scenarios in case things changed.

In reality, however, some decisions get skewed by schedules. A skipper may be tempted to leave “on time” to accommodate a crew trying to complete the passage during a two-week vacation….and to avoid trying to replace crew at the last minute.  There is often added pressure to meet a pre-scheduled flight or to return to the U.S. for Thanksgiving or another unalterable event.

Worst of all, is the skipper who makes his decision based on when other boats are leaving, abdicating his responsibility to make his own decision. Weather-overload is a common malady; conflicting forecast models and interpretations can be confusing. Jim Tingley, experienced captain on Archangel, a 70 foot Hylas, invited fellow cruisers on board to help them evaluate their options and set their individual departure dates.

On Archer, we decided, if we elected to leave on November 2, we would face upwind conditions for several days and the possibility of gale force winds and thunderstorms closer to the tropics …. even if the tropical wave did not develop into a depression or named storm.  Not unsafe, but definitely more uncomfortable than we would like.

Over the years, we have noticed that, as a general rule, any time a low pressure area forms somewhere in the Caribbean when we are set to leave the Chesapeake, even if it doesn’t develop to a Tropical Low, we seem to get some fairly significant winds from the east-southeast during the passage. That means a lot of beating to windward. Our boat will perform well in those conditions, but it’s just too wet, too boisterous, and too tough to get sleep.  Our choice in these conditions is to wait for the next weather system to move through.

As Hank George on Flash, a Catana 47 said “You only get a reasonably predictable weather forecast for three or four days when you start. This year, those four days looked like they would be uncomfortable for a Gulf Stream crossing, so we delayed.” 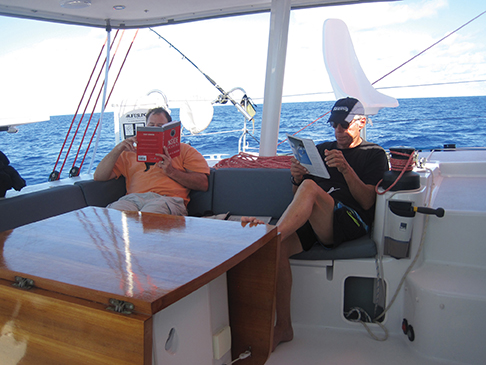 WHATS RIGHT FOR ONE…
Flash, Archer, and Archangel along with six others, elected to wait a week. While we did not know it when we made our decision not to leave, the Tropical Wave did develop into a named storm…. Tropical Storm Kate. By the time we left, Kate was out of our way and the next front had passed over the east coast and on to the Gulf Stream.

Our decision to leave when we did worked out well for our crew, boat, and personal tolerances. (Some years, we haven’t been as lucky!). But that doesn’t mean that ours was the only right decision. Others made alternate decisions based on their own evaluations and personal reasons.

Tom and Jane Babbitt from Camden, Maine on a J46 Bravo elected to leave a day early, on November 1, with two additional experienced crew members, reasoning they would have a rough ride through the Gulf Stream and then a good sail for the rest of the passage. The tropical wave near the islands only had a 10 percent chance of developing further, based on their pre-departure forecast.

But the weather changed daily and the trip for Bravo became an endurance contest….nine uncomfortable days beating to weather. But they also arrived in the Caribbean a week before we did and were enjoying cruising life in warm climes while we were still cold in Hampton VA.

Ralph Cerretani from Boulder CO on Free Rein, a Jeanneau 54, left on November 1 as well. He and his crew completed the passage in 11 days. “We beat into the wind more than I had anticipated, but basically, I studied the weather window and thought it was a good time to go. I always focus on preventive maintenance and knew the boat was in very good shape when the crew arrived.”

Morello, a 10,000 pound, 40 foot trimaran left on November 3. As they waved good-bye in Hampton, Owners Larry and Amy Ketten shouted to us that they would likely end up in the Bahamas. Turns out, their path to best avoid the path of TS Kate was to go east rather than to steer toward the Bahamas, so they ended up in Virgin Gorda with the rest of us.

Simplicity, a St Francis 48, left Hampton on November 3 and struggled with a blown out, shredded main sail as they attempted to cross the Gulf Stream. Ralph Hendry and crew diverted into Morehead City NC for five days of  repairs. Their decision to start again during the first weather window after their repairs were finished was made easier by the fact that they were already south of Cape Hatteras and Tropical Storm Kate had passed above their track. Ralph and his crew experienced similar conditions to those we had on Archer for the rest of their passage.

Paul Wagshal from Vancouver, BC on Blue Sky, a Lagoon 420, also left Hampton on November 3, saying “it’s the devil that you know. We knew it would be rough, but there were no guarantees that it would be better if we delayed. This is our third trip down and we knew what to expect.”

Nepenthe, a Pacific Seacraft 34, left on November 5 from Hampton with two souls on board. The weather models did not predict the formation of Tropical Storm Kate until the 6th. Skipper and Coast Guard veteran (with a ring in his ear in honor of his rounding of Cape Horn) Charly Archinal hails from near Portland, Maine. He sailed down the Virginia coast crossing the Gulf Stream close to its narrowest point near Hatteras. Five days out, to put distance between Nepenthe and the projected storm path, he maneuvered west southwest, still east of the stream, and prepared his boat for what was to come. He reported maximum gusts of 94 knots and high winds for about four hours and passed just west of the storm path. We were happy to see the boat and crew safe and sound in Virgin Gorda when we arrived. 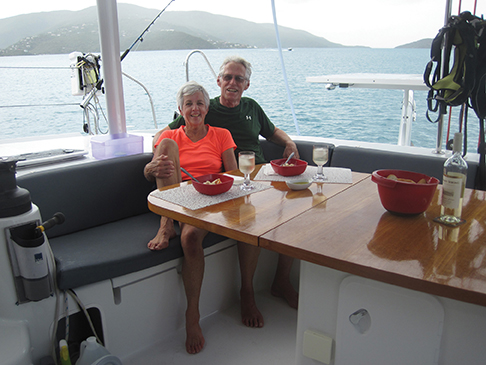 circumnavigation. Every trip down to the islands in the years since has reinforced our belief that the weather along that route in November will be one of the most difficult to predict that most passage-makers will ever tackle. Learning to make a confident, informed decision about when to leave the dock on the East Coast is the most critical…and hardest….part of the passage.

Julie Palm along with her husband Rick, is enjoying extended cruising onboard their Outremer 51, Archer currently in the Virgin Islands.

View all posts by Julie Palm