The morning sun lazily appeared from behind the mountain tops, painting a miraculous image on the blue sky above. Below, steam rose from the clear water of the fjord and covered La Belle Epoque with glittering crystals of frost. 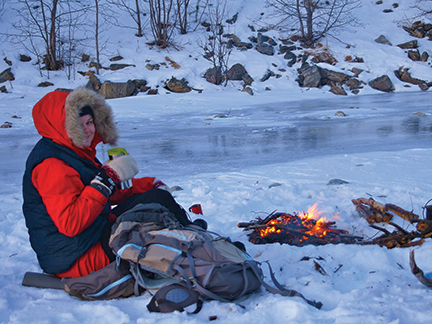 On the other side of us, the floating dock threatened to sink due to ice  and the fishing boats heeled dangerously under the heavy white weight they were carrying, but the water around us was open. Every now and then, individual floes drifted by from the mouth of the Alta River, which had been covered for weeks with thick ice. The Norway current, an extension of the tepid Gulf Stream, warms the water here just enough to protect it from freezing—even at a frosty air temperature of 30 degrees below zero. This is winter in the high latitudes of Norway.

NORWEGIAN HOSPITALITY
Jürgen and I left Hammerfest, the northernmost city in the world, for the town of Alta. Following the harsh but beautiful Altafjord that reaches far into the land of Finnmark (a county in northern Norway), we moored our yacht on the sunny side of Alta’s famous mountain, the Komsa.
With almost every nautical mile that we traveled into the fjord, temperatures fell and sailing became more and more of a challenge. Our lines became stiff like rods, the winches froze and stopped working, and the spray froze in mid-air; covering the deck with ice and hitting our faces like thousands of needles. Still, it is a stunningly beautiful place. The harsh, yet picturesque nature of northern Norway made our hearts jump and the people received us with great kindness, which was very comforting.
In Alta, we shared the dock with fishing vessels and work boats, but whoever thinks there are no sailboats in the high north is mistaken. Even up here we have met a small group of cruisers, but of course, fishing vessels and power boats make up the majority of the other yachts.

The Norwegians of Finnmark are proud of their country, one that remains buried under snow and ice eight months of the year. It is a land lit by the midnight sun in the summer and shrouded in darkness during winter while the green rays of the northern lights dance across the sky. The friendly folk here invited us to learn more about their country and to find out why they love the winter so much. 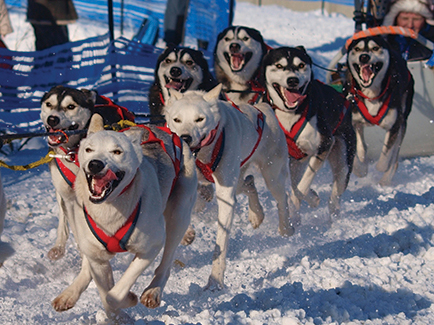 We tagged along with our new friends for sled dog racing, cross country skiing on frozen rivers, hiking over snow covered mountains and roaming the valleys on snowmobiles. They invited us to warm up in lavvus—traditional tents of the native Sami—and melt ice on a campfire for tea. While traveling inland we made stops at rural inns where we accepted invitations for reindeer steak and red wine.
Getting to know Norwegian hospitality was amazing. The people left their homes open so we could shower or wash clothes, they lent us their cars when we needed and offered to pick us up for excursions. In return, we showed our Norwegian friends our world by inviting them cruising out into the fjord where we anchored in lonesome bays and fished for fresh cod. We also showed them photos of our adventures along the Norwegian coast and told stories while serving steamy apple strudel.

LOVE OF HIGH LATITUDES
Our story is about the adventures of cruising slowly in high latitudes. It is not just about sailing through challenging areas, but also about staying during the off-season to learn about nature and culture. The endeavor took lots of preparation and required special care, but we relished the challenge.

During the summer, we sailed along the Norwegian coast up to the Russian border. The trip was demanding; characterized by changing weather conditions, tides and strong currents, wind effects on the coast and in fjords, and sudden fog. But then came autumn and winter and the real adventure began. One low pressure system after another marched up the coast while the sun moved farther south to leave us in the blue twilight of the polar night and soon enough, in darkness. What an experience—night sailing nearly all day long! But we were lucky. The approach of winter was gentle and temperatures dropped slowly. However, we had been running our diesel stove for a month already to keep our floating home dry and warm.
Our green ketch is well prepared for this type of trip. With an enclosed and heated wheelhouse, the boat is designed to help us keep warm and save energy. In the fall we stowed away our large genoa, switching it for two heavy headsails that enabled us to respond quickly to the changing wind conditions. Our two permanently installed anchors at the bow provided good service to secure the yacht in northern anchorages, even during violent katabatic winds. And while the solar panels charged up our batteries 24 hours a day during the summer, the wind generator took over during the dark season and did a great job caring for our electricity supply when we were without shore power.
Along the way in these high latitudes we made small adjustments and improvements to keep us sailing safe and happy. And that was good enough for us. The experience and beauty of cruising the north caused us to fall in love with the high latitudes and the people who call this area home. To that end, we keep dreaming about the Arctic and have promised to navigate La Belle Epoque for a bit longer through the exciting northern ocean.

Austrian born, Claudia and her husband Jürgen, bought La Belle Epoque, fixed her up and set sail in 2009. Since leaving, they’ve cruised the rivers and waterways of Austria and Germany to the North Sea, and sailed around Denmark to the Baltic Sea and Sweden before transiting the Norwegian coast to the Russian border.

View all posts by Claudia Kirchberger