The term racer-cruiser has always given me pause primarily because it seems this moniker represents too many tradeoffs for a boat to do both well. The concept has been more of a marketing term than a reflection of reality, until now. Danish builder, X-Yachts, has squeezed a new design between their established Xp (performance) models and their Xc (cruising) line and to most impressive results. The new 41-foot X4 leverages the best of both worlds and is a kick in the pants to sail on a breezy day.

I admit that our test on the blowy Chesapeake Bay on hull number four was off to an inauspicious start due to my own distraction. Looking up at the impressive 1,000+ square feet of sail area, I lost track of the shallows of the bay and we soon found ourselves grounded, stuck in the soft mud near a marker that should have been as clear as day. A bit of backing and twisting and we broke the suction off the encapsulated keel and with no harm done – except maybe to my ego – we were off once more. 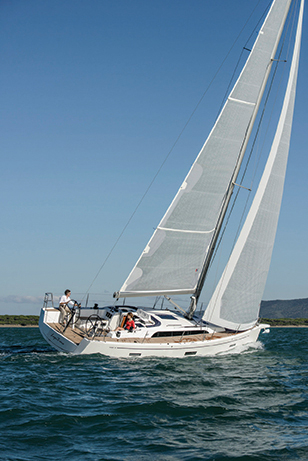 The helm was noticeably light and the boat extra responsive. Any racer wanting to keep the performance edge but willing to switch to a family cruiser will appreciate this new design. Upscale details like Carbonautica carbon wheels may be optional but the snappy tacks are standard and the comfortable accommodations are a bonus.

The rig is fractional with a standard keel-stepped, aluminum Selden spar and discontinuous rod rigging. A carbon mast is optional and may be irresistible to club racers with high aspirations. Spectra halyards are led aft below deck to Spinlock rope clutches in the cockpit and there is a choice of a manual or hydraulic backstay adjuster.

The double-ended mainsheet is led aft to two Harken winches (four others are forward) and the recessed traveler bisects the cockpit sole, a detail that’s a nod to the brand’s racing heritage. The jib is fixed to an on-deck Furlex furler and the sheeting angles are nice and tight. With 12 knots of steady breeze and the 106% jib accompanying the traditional hoist mainsail, we sailed 7.9 knots at 36-38 degrees apparent wind angle (AWA). Truly, the X4 can point without stalling for excellent upwind work.

Our breeze continued as the day waned. We eased off downwind and popped the asymmetrical spinnaker that brought us to 8.4 knots at 120 degrees AWA. The hull sliced through the small chop and had the sun not started to set, I’d have stayed out as long as there was a breeze. Alas, it was time to turn on the engine and scoot back to the marina. Auxiliary power is supplied by a Yanmar common rail 45-hp. diesel with a saildrive that pushes the 19,500-pound displacement with ease. At wide-open throttle we motored at 8.4 knots at 3200 rpm, but a better cruising speed is 7.0 knots at 2000 rpm.

SLEEK LINES
X-Yachts’ three waterline stripes are a quick way to identify one in an anchorage and look like a boat savant in touch with the cachet of the brand. Like the rest of the family, the X4 has a sleek profile that is long and low and belies the high volume interior, which sets it apart from the Xp line.

With its vacuum-infused epoxy construction and stiff M-foam coring, the X4 is only eight percent heavier than the performance line but still includes the X-Yachts trademark steel grid that helps spread keel loads and stiffens the hull.

There is a choice of keel depth from 6′ 1″ to 8′ 3″ with either a T- or L-shaped bulb. Overall however, the X4 is one foot shorter and over 6,000 pounds lighter than the Xc 42 cruising model and this weight savings makes possible larger fuel and water tanks, more battery capacity and room for extra cruising equipment.

The deck has been streamlined so it’s less cluttered and easier to navigate than on the other models. The short jib tracks are on the coachroof with the sheets running in channels under the deck. This keeps the side decks clear, making quick trips fore and aft easier. With flush hatches, a below-deck windlass and optional fold-down cleats, there are few things to trip over or stub your toe on when moving about.

There are ample ways to personalize the X4 with most of the options at either end of the boat: Choose either a solid open transom or one that has a built-in drop down swim platform. The swim step makes it so much easier to get into a dinghy, onto the dock or in the water. You can also opt for one of three bowsprit configurations including a standard composite cowl with an integrated anchor fitting, an extended carbon sprit with an anchor roller or just the carbon sprit with no roller where you can attach a Code 0. Amidships you can add a fixed windshield, electric winches and teak side decks to complement the teak cockpit sole.

The cockpit has a standard fixed table with instrument pods at one end. A removable table is optional and racing with crew will be easier with it out of the boat. The best place from which to helm is to sit up on the cockpit coaming just ahead of the wheel and behind the primary winch. From here, you can manage the mainsheet as well as the traveler and still keep one hand on the wheel. The sight lines are excellent forward as well as up to the mainsail to check the trim. 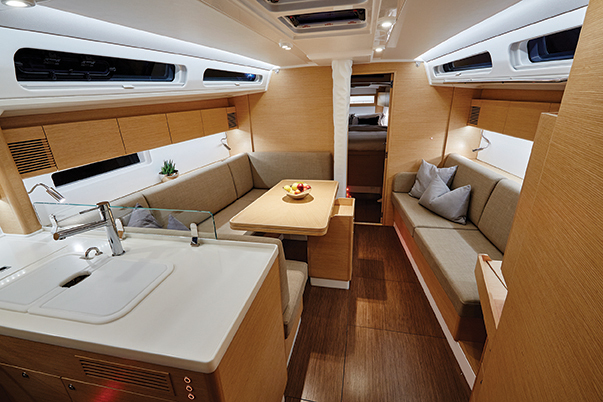 The interior is all about contemporary Danish design, which is also an X-Yachts trademark. The standard finish is T-Tech engineered wood, which is a darker teak color while the optional O-Tech is light like Danish home furniture. The aesthetic is clean and minimalist.

Four interior layout options are available with different combinations of two or three cabins and one or two heads. The master stateroom is forward and has an island double bed and a choice of an en suite head or a bureau, both to port. When two cabins are stipulated, the primary head aboard is aft and is pushed back. The extra room created in this configuration is dedicated to a forward-facing navigation station with its own dedicated seat that any cruiser will appreciate.

In the three-cabin configuration, the starboard head moves slightly forward and becomes truncated to make room for the cabin entrance. In this layout, the nav station is aft-facing, and shares the seat with the starboard settee. To my taste, the best configuration for cruising couples includes two cabins, the large single head aft and the forward-facing nav station. It’s the best use of space for two people who want an easy open floor plan and may bring guests only on occasion. 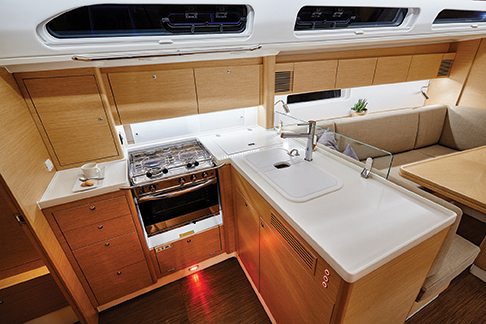 Regardless of the cabin choices, the middle of the boat remains mostly unchanged. The L-shaped galley is to port with twin sinks, a two-burner gimbaled stove and a top-loading refrigerator. A second fridge is optional and front-loading for those smaller items that are needed more frequently. Galley stowage is good with numerous drawers and lockers for the chef’s tools and the Corian counters are spacious enough for two people working together at mealtime.

The saloon is just ahead with a U-shaped settee to port. The dinette table folds out to join the portside bench so six can easily enjoy dinner and never feel cramped. With multiple ports and hatches, the whole boat is bright and airy. A Fusion stereo with Bose speakers adds tunes to create a nice ambience so when you’re done reeling off the miles or rounding the buoys, you can relax below in exceptional comfort. 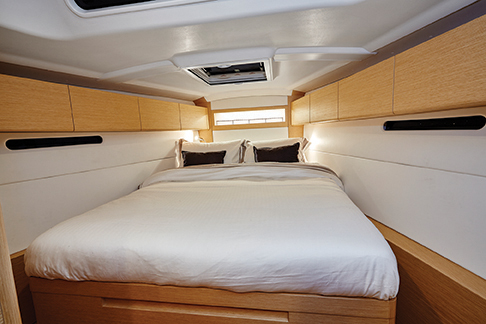 RETHINKING THE RACER-CRUISER
The X4 follows in the footsteps of the X6 launched last year and is based on the same principle of finding a middle ground. The theory goes that the X4 will appeal to those who aren’t up for the intimidation of the race-oriented Xp but can’t quite settle into the heavier Xc with its classic styling, in other words, somewhere between a rock star racer and an amenity-laden cruiser.

It’s too early to tell whether this mashup will find its own niche without dampening sales of its siblings but one thing is clear, it’s a distractingly fun boat to sail so if you get a chance to take the helm of an X4, keep one eye on the sails and one on the navigation markers and then let the wind do the rest. 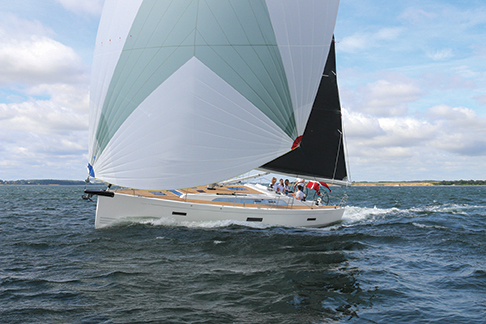