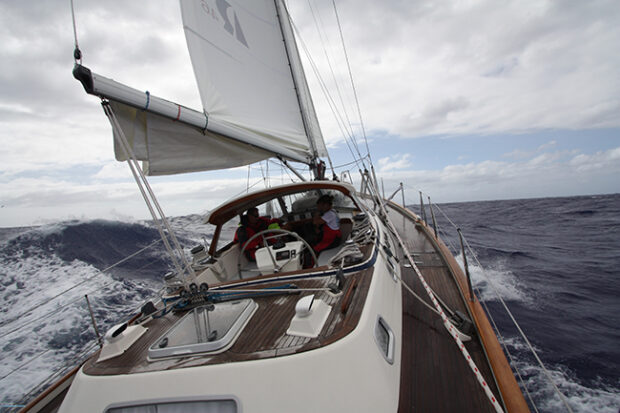 The Importance of Deep Reefs

When thinking about all of the preparations we need to make to our boats to get them ready for an offshore passage, setting up the sails for heavy-weather sailing is high on my list. We don’t tend to sail in high latitudes nor do we sail offshore out of season, except the passage from the East Coast to the Caribbean in November, which is not exactly off season but sure can get windy and bumpy. But we do occasionally get ourselves into a blow, whether it be a big squall or augmented trades in the Caribbean. In our most recent sloop, we had an in-mast furling mainsail, which we could reef down to a tiny scrap if need be, and we liked to reef early to reduce pressure on the in-mast mandrel and swivel fittings. On our previous boats with slab-reef mainsails, we opted always to have a deep third reef that could be tied in quickly since the reefing lines were always attached. For the headsail, we have pads sewn into the genoa’s luff to allow the sail to roll evenly as we reef. We have our sailmaker sew in vertical black markers along the foot so anyone on deck will know where the best reef points are. And, we have a long sail track on deck and genoa cars that can be adjusted from the cockpit, so we can move the cars forward as we reef the headsail in order to maintain a semblance of fair sail shape and prevent the leech and the top of the sail from flogging. Friends who have used ATN’s Gale Sail highly recommend having one on board as a storm sail. Reducing sail always makes a boat feel happier in bad weather and we rarely lose much speed. So, be ready to reef early and often.