Celador was spending the summer sailing in the Greek islands in the middle of the Aegean Sea. Little did we suspect that this cruise would include a lesson from weather school. Our topic: the meltemi  (published May 2016)

The islands of the Cyclades group are roughly arranged in an elongated circle around Delos, forming the cyclical route of travel to that island, sacred to Apollo in the days of Homer. The seasonal summer wind, the meltemi, is particularly strong there. These dry northerly winds are formed when a stationary high pressure system over Europe sends winds clockwise down the Aegean, joining with the counterclockwise winds produced by a stationary low over Asia Minor.

Meltemi winds start in late May and increase as the season progresses, being strongest in mid-July and August.  They can be hazardous to sailors because they come up quickly in clear weather, without warning, and can reach 40 knots. They blow hardest in the afternoon and often die down at night, but sometimes the meltemi can last for days without break. At one point, it blew for seven days straight, pinning us down in Naxos with winds from 20 to 35 knots gusting day and night. 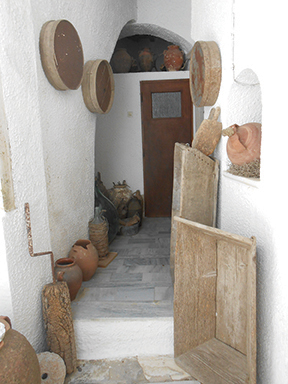 The up side to the meltemi is that these winds keep the islands delightfully cool. In mid-July the still cool sea temperature combined with the wind keeps daytime temperatures moderate compared with the sizzling mainland. Evening temperatures and breezes often had us wearing jackets and blue jeans. 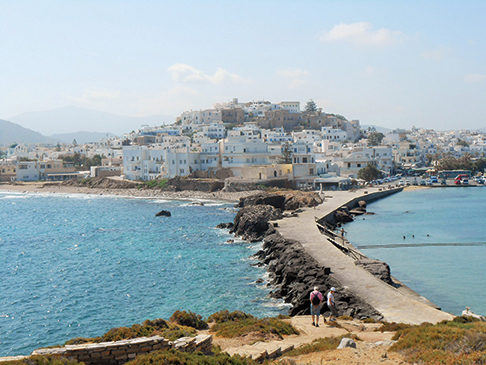 The topography of the islands also affects local wind patterns, especially during meltemi periods. Winds blowing in a steady direction on the open sea are bent around islands. Katabatic winds are jet-effect gusts caused by the wind being channeled over mountains and funneled through valleys. These gusts coming over and around an island can lay a sailboat over on her beam ends or cause anchors to drag if they are not anticipated.

As the wind blows southward through the Cyclades, the long fetch of the open sea causes waves to build during the meltemi as well. In the wide corridor between the islands of the Cyclades and the Dodecanese, the meltemi blows unimpeded for over 100 miles. In six hours of 30 knot winds, waves can reach heights over three meters (10 feet).  The inter-island ferries also throw significant wakes, which can also reverberate off the islands. It can get pretty choppy out there!

At Anafi, we observed a sign of the approaching meltemi.  We saw a small cloud fluttering like a banner from the high craggy mountaintop, in an otherwise cloudless blue sky. This orographic cloud is formed by air hitting a topographical feature, such as the mountain, and being pushed upward, where it cools rapidly and forms a cloud.

Other signs include: higher predicted atmospheric pressure over the Balkans and Northern Aegean; a sudden drop in humidity (observed as the first morning without dew on the decks); scattered small altocumulus clouds a day in advance; and a clear improvement in visibility combined with a rise in atmospheric pressure (four millibars within 12 hours). 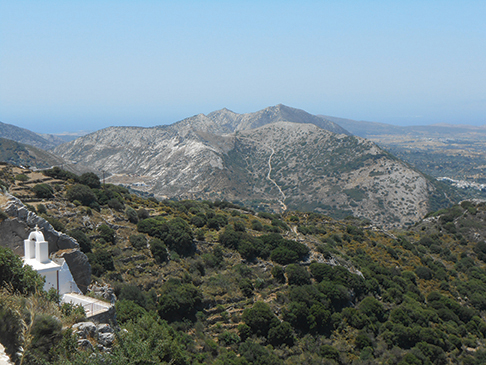 Captain Ron had his weather eye out, and determined that we should skip our planned stop-overs and make directly for the sheltered marina at Naxos ahead of the strong meltemi, which was predicted for the next several days. We sailed with reefed sails on a beautiful beam reach most of the day and Celador galloped over bounding waves. The seas grew larger as we approached Naxos, incorporating massive ferry wakes, since Naxos is the ferry hub for the Cyclades.

We came in around 2 p.m., just behind some Norwegians who blew by us with their genoa flying. It looked as if they were taking the last slip. Rats! Their anchor windlass jammed, however, and they ended up rafting up to another boat, so we were able to squeeze into that last space. We were relieved to be securely moored at the quay as latecomers jockeyed for space in the exposed anchorage. 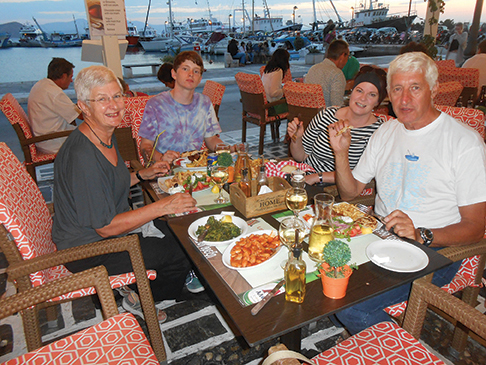 The meltemi continued to howl overhead and rattle the rigging. We spent our days napping, shopping, drinking coffee, reading, and swimming. Ron found a taverna featuring live bouzouki and guitar music, and we enjoyed a glass of local white wine as we listened. One day, we decided to go horseback riding. The next day, we rented a car for a road trip around the island. We wound our way to the Temple of Dimitra, ancient goddess of the harvest, on a high hill overlooking farm fields, then on to the village of Halki, where an old man sold me a kilo of beautiful ripe figs for a euro. The figs were delicious and so fresh! 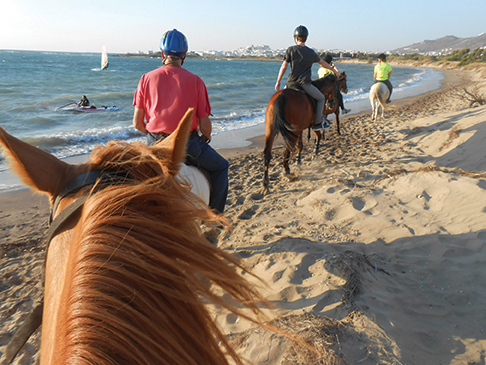 We visited an old distillery where we sampled Kitron, the island’s signature aperitif. On we drove to Apeiranthos, a picturesque medieval town on the east side of the island. The oldest buildings had Venetian coats of arms carved into the stone lintels. There were interesting geologic, archaeological, fine art, and folkloric museums there, and one admission ticket covered them all. For lunch, we feasted on local hard cheese, crusty fresh bread, feta warmed en casserole with tomatoes, peppers, onions and oil, saganaki, Greek salad, meatballs and, of course, “ena potiri krasi levko” (a glass of white wine).

Stopping at a high panoramic overlook, we spied a church clinging to the hillside just below and I climbed down to it. There was only the sound of the wind, and the tinkle of goat bells. We drove on to the marble quarry, used from ancient times through to the present. Ron and I hiked up the hillside to see the two “Kouros”, unfinished marble statues, which lay where they fell 2,500 years ago. There was an ancient aqueduct system, which still carries water to the town through stone channels and a tunnel under the mountain. The next stop was a antique olive press, a stone mill used to grind the olives into mash, and the screw press where the bagged mash is squeezed to extract the oil-laden juice. In spite of Ron’s relentless teasing, I bought “olive oil and donkey milk” skin cream…no more wrinkles! Later, we had a late-night picnic of local bread, olives, figs and cheese in the salon. The meltemi wind strengthened and blew hard all night.

Captain Ron’s preferred weather site, Windfinder.com, predicted that the meltemi was supposed to subside at last, and we decided to set sail for Amorgos early in the morning. Starting out with the predicted light air, by noon it was blowing over 30 knots.  Seas piled up to three meters; wind-driven waves and ferry wakes combined to create massive chop. Winds pushed and pummeled us from different directions. After taking a real pounding and making minimal headway for almost four hours, we saw in the distance a tiny island with an even tinier cove where a catamaran lay at anchor. After consulting binoculars, chartplotter and cruising guide as to the depth, bottom type and submerged hazards of this out-of-the-way cove, we jumped at the opportunity to duck into the shelter of uninhabited Nisos Khoufonision (which we nicknamed “Confusion Island”).

We dropped anchor in six meters of gin-clear water and ran out extra chain to assure our safety against the strong katabatic winds gusting over the ridge. We dozed and read all afternoon and spent the night there, glad for the quiet security of the cove. 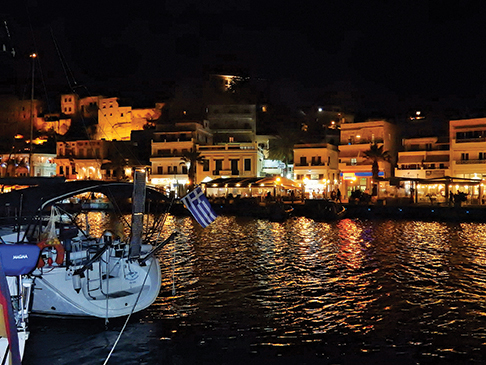 As the stars came out in the violet sky, we poured a tiny glass of local wine and toasted to our good luck. We were grateful to be safe again from the fierce meltemi.